A report calling for the Elizabeth line (nee Crossrail) to be extended from Abbey Wood to Ebbsfleet (C2E) has been presented to the Thames Estuary Growth Commission. 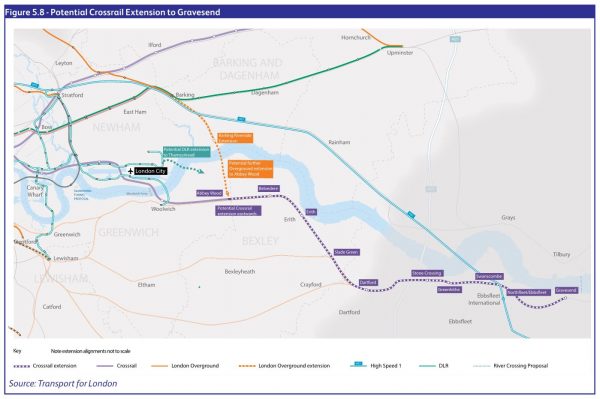 The early plans for Crossrail included running the line out towards Gravesend, but this was cut back in the 1990s, and in 2008 when Crossrail got approval, it was difficult to support the extended line. However, some passive provision was included in the station design at Abbey Wood to permit an extension to be added on later.

A Safeguarding Direction is also in place for an extension between Abbey Wood and Hoo Junction following the existing alignment of the North Kent railway lines.

The C2E campaign is calling for an extension to Ebbsfleet, whereas Network Rail is proposing a slightly longer extension to Gravesend, mainly as Hoo Junction would offer a more convenient depot and turn around point.

Once Crossrail construction got under way and people started to seriously see the impact the new line would bring, there has been a campaign to restore the extension.

Network Rail’s draft Kent Route Study published last year looked at the possibility of an extension and said that doubling the tracks from two to four would be proposed in order to overcome identified technical and operational concerns of running Elizabeth line trains over already busy Network Rail tracks.

The Crossrail to Ebbsfleet (C2E) campaign is looking at how the extension could be paid for, and expects that up to half the cost could come from local sources, thanks to regeneration and new housing developments.

The funding is thanks to the fact that the C2E route directly connects three major regeneration areas: Bexley Riverside, Dartford Town Centre and Ebbsfleet Garden City.

It’s estimated that the regeneration of 8km of Thames riverfront would result in some 30,000 additional houses being built, and the line of the C2E proposal would support around 55,000 homes in total.

The Thames Estuary Commission, led by Sir John Armitt, will report in May. If it endorses C2E as a critical infrastructure investment, council leaders and MPs will be seeking Government support to enable the extension to reach the next phase of development involving a full business case and detailed engineering design.

The extension is anticipated to take up to 10 years to design and build and is estimated to cost in the region of £1.5 billion.

In the latest transport strategy, the Mayor of London supported the extension in principle, but noted that London wouldn’t be providing any additional funding for it.