More moves towards driverless trains on the Underground

A document has been published by the RMT claiming to have been sent to managers outlining plans to move towards driverless trains. The document does not say anything that is new, but does flesh out some of the details.

The planned driverless trains will still have staff on them — so they are closer to the way the DLR operates than being totally automatic — at least at first.

It’s possibly worth noting that the Victoria, Jubilee, Central and from later this year the Northern lines are already driven under automatic train operation, but with an operator on board, so they are essentially driverless, but with the operator sitting in a drivers cab rather than standing in the carriage.

The first line to be able to go totally driverless as most people would understand the term, is as widely expected, to be the Piccadilly line when the new train design tender is issued. That tender is due to go out next year, with the first trains coming into service around 2022.

Those new trains will be similar in concept to the sub-surface trains — namely fully walkthrough, and air-cooled. I would expect that the air cooling will work only when the trains are above ground due to the difficulty of dumping hot air into already hot tunnels, but as the Picadilly line runs above ground for a considerable part of its length, there should be enough surface time to cool trains down before they enter the tunnels. 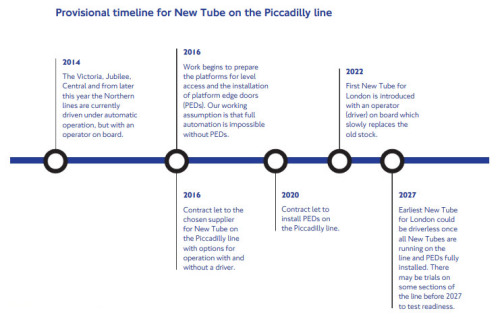 The likely timetable, according to the document, is that work will start in 2016 to prepare Picadilly line stations for platform edge doors — similar to those installed on the Jubilee line extension.

At the same time, the contract for some 200+ new trains will be placed — and these trains will be required to operate with an on-board train driver. However, the design will allow for totally automatic operation at some point in the future.

In 2020, the platform edge doors will be installed on the Picadilly line based on the earlier preparation work.

And finally in 2022, the first of the new trains will start to appear on the London Underground.

However, the first date that the Picadilly line could switch to DLR style driverless operation would be 2027, as that is roughly how long it would take to completely replace all the trains and complete installation of the platform doors.

So far, so much last a case of migrating the Piccadilly line to long-proven methods of working around the world, and on the DLR. However, at some point after that, theoretically, it might be possible to switch to running the trains without any staff at all, which of all the planned changes is probably the most radical.

Then again, by the 2030s, maybe the idea of trains with staff on board will look increasingly Victorian and we consumers will wonder why it took so long to switch to automatic operation. Or maybe we will still feel the need for a member of staff to be on board.

Who knows, but at least the trains will have the option.