Last night I wandered along to the V&A for one of their Friday night events, mainly for a couple of exhibitions on “vanishing London” and “Buildings that were never built”. Both hosted by RIBA, and despite allowing a suggested hour+ for the exhibition, I have to confess that I was only there for half an hour max.

I did ask if I could take some photos of some of the pictures of the grand unbuilt buildings, but absolutely not! However, they did point out that most of them are available on the RIBA website, so I took as many notes as possible so that I could do some searches this morning.

I have a bit of a thing for “big buildings”, so here are a few that I could find which really interested me last night.

One which is quite famous and you may have seen elsewhere is this monstrous structure which was planned to go up next to the Palace of Westminster (click on all images for larger versions). This was a proposed design for the Imperial Monumental Halls and Tower – drawn in 1904 based on designs by Edward Beckitt Lamb and John Pollard Seddon. 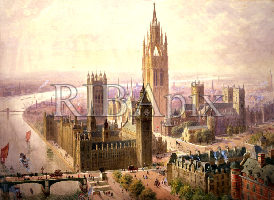 Here however, is a less often seen view – from the other side, and shows the massive halls which would have been built alongside the tower. 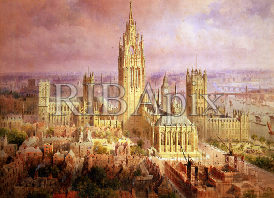 There were also quite a few plans for a much larger Palace of Westminster, and I gather some of the drawings are stored at the National Archives – as well as in the Parliamentary Archive. I hope to get some copies eventually of those.

Another area which interests me is the crazy, if optimistic visions of the future which were starting to excite urban planners in the 30s-60s. By now we are supposed to be flying to work in out private helicopters and there would be massive motorways driven right through the very center of our cities. The images always showed the motorways as vast empty spaces with just a few cars on them – presumably as we are all flying around in our helicopters.

There was a very serious plan at one time to demolish Covent Garden and turn it into a major road – until it was listed at the very last minute in 1973. However, here is an idea from a student of what the road could have looked like as it came past Trafalgar Square. 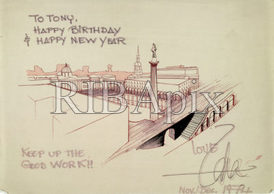 You may well shudder in horror at the idea!

Another concept drawing for the reconstruction of the war damaged areas around St Paul’s Cathedral taps into the mania of the time for large tower blocks with lots of space between them. I have to admit, that I am quite a fan of this and feel that the architects of the 60s are unfairly maligned. The buildings didn’t fail as social housing because the concept was flawed, but because the councils which owned them never bothered to maintain them properly, so they became decrepit and run-down leading those who could to leave them, and resulting in them becoming modern slums.

The restorations of places such as Trellick Tower show that the concept was perfectly fine – they just needed looking after.

Anyhow – rant over, and here is a concept for St Pauls

Another one which makes people sit up and gasp when they see it – is the proposed tower to be built on top of the Selfridges department store in London. 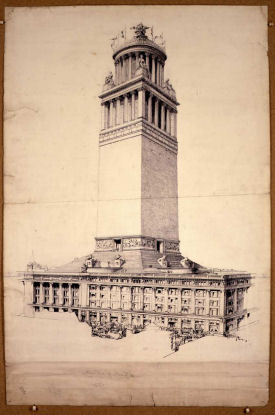 OK – that was a tad extreme, but the idea for a tower on the building was very serious and I have seen several different designs. I am not totally sure why it was abandoned – probably cost issues. Here is one of the more sensible proposals.

Although the tower was never built, the roof itself did for a while become an open plaza for the general public and had a massive lawn along the frontage. Alas, the tons of soil were not a good idea and the lawn was removed. I still think it would be wonderful to reopen the roof though – maybe with somewhat lighter flagstones or decking instead of the real grass.

Although I said the huge tower wasn’t built – the building did at one time have towers on the roof – as it had two large radio transmitters there for local broadcasts in the early days of radio. You can just about see them here in 1928. 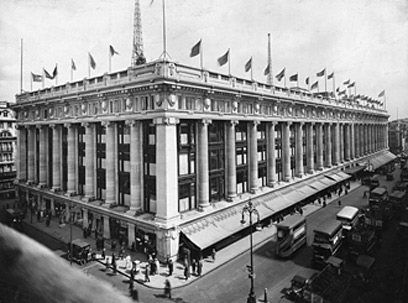 Of course, none of these were ever built – but for a monumental structure which was attempted, look no further than the Ryugyong Hotel in North Korea. It rises a staggering 105 stories, and if it had been finished would have been the world’s tallest hotel. Alas, cheap concrete render the structure unusable, and cost cuts mean it was never finished. I really like it though. 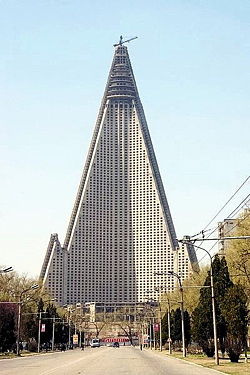