Military flypast over London on Friday

Look to the skies! This Friday lunchtime (13th March), there will be a military flypast over the centre of London.

A service to remember the 453 British servicemen and women who lost their lives during the Afghanistan campaign will take place at St Paul’s Cathedral, and will be followed by a parade through the City of London from St Paul’s to the Guildhall and a flypast.

Following the service, The Prince of Wales will take the salute as a parade of personnel who served in Afghanistan from the Royal Navy and Royal Marines, the Army and the Royal Air Force, and veterans, supported by military bands and Pipes and Drums will make their way from St Paul’s Cathedral.

The parade route is Ludgate Hill, St Paul’s Churchyard, New Change, Cheapside and King Street, then Guildhall – and expected to take place between noon and 1pm.

A flypast of aircraft used in the campaign, including Chinook, Apache and Sea King helicopters, and Hercules and Tornado aircraft will take place over the parade and the Cathedral in tribute.

The flypast is due to take place during the military parade, although an air traffic warning for a military flypast over Tulse Hill exists for 12:20pm, so I expect the planes to come in via Croydon, Tulse Hill, Southwark and over the City of London — that would tie in with the planes approaching towards the viewing area at St Paul’s, which is a raised platform opposite the City of London visitor centre (should you want to be in place to see royal heads). 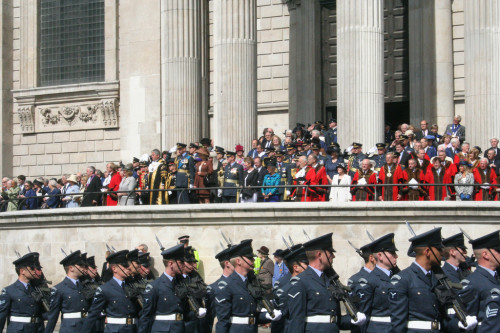