On the 10th November 1920, the mail train arrived at Victoria Station at platform 8, but one of the carriages had its roof painted white to mark it out as different from the others.

This was the carriage carrying the remains of the Unknown Warrior.

The coffin carrying the remains had been ceremonially escorted from France across the Channel to Dover earlier that day. The coffin was then placed in a carriage, which was already significant for having carried the body of Edith Cavell and put on the South Eastern and Chatham Railway to London.

The top of the carriage was painted white so that people standing on bridges and beside the railway line would know which specific carriage to salute or otherwise pay their respects to as the train passed.

Considering the pomp and ceremony that accompanied the coffin from France, I find it odd that it was put in a carriage as part of the Mail train, rather than having a dedicated carriage and locomotive all to its own. Anyway, the train, and special carriage arrived, at Platform 8 at precisely 8:32pm in the evening and remained there overnight with an honour guard until the following morning, when it was taken down the road to Westminster Abbey.

I say “it”, for while it is almost certainly the body of a man, the whole point of it being an unknown warrior is that we would never be 100% sure.

Part of the reason behind the Tomb of the Unknown Warrior I was told recently at the Poppy Factory, was a bit of a fuss over the lack of religious symbols on the Cenotaph. That memorial deliberately lacks a Christian Cross on its design so that people of all faiths (and none) can salute it when marching past on Remembrance Sunday.

Therefore the Church wanted a religious memorial, and got the Tomb.

However, back to Victoria Station, and if you go to the less used Platform 8, you will find a small wooden memorial to Unknown Warrior and its arrival in London. 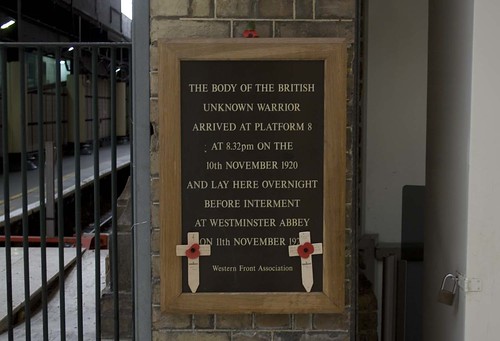 It is said in various sources that there was a memorial mark on Platform 8 itself where the carriage stopped, but if so it has since vanished, and the three staff I asked at the station looked at me as if I was a bit weird.

Tomorrow evening (10th November) a short ceremony will take place at Platform 8 to remember the moment the carriage arrived. Forming up at 8pm, at 8:30, the Last Post will be sounded, and there will be a two-minute silence. Then at 8:32pm, the exact moment the train arrived, there will be a presentation of wreaths.

It was originally, if rather less so these days, two one minute silences in succession. The first minute is for thanksgiving for those that survived and the second is to remember the fallen.