Twenty years ago, a signal cabin controlled its last trains on the London Underground, but now a team of enthusiasts are attempting to restore this lost piece of tube history to working order.

The remarkable signal cabin was not just ensuring that passengers trains ran along the Central line, but was also one of the last to handle freight traffic on this section of the railway.

This is the Epping Signal Cabin 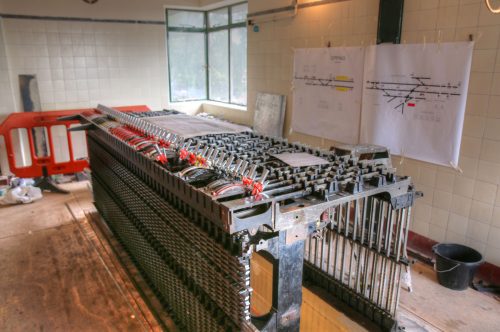 It was also originally not part of the London Underground. In 1856, a mainline railway was built between Stratford and Loughton, and then extended to Ongar a decade later.

In September 1949, the railway was handed over to London Underground as part of the Central Line. Its history makes it unusual on the tube network, but this was also the era of freight on the railways, and Epping was a major cargo hub.

Mostly for coal in the days before north sea gas and the arrival of the clean air act which banned coal burning in London, but also for milk and food.

So what is today a sleepy end of the Central line was once a major transport hub.

Due to this unusual situation, the signal box was equally unusual in that for a seemingly small train station at Epping, it had a 47 lever frame to control all the traffic, making the control box unusually large.

Freight traffic continued until April 1966, and in July 1996, as part of a major signalling upgrade of the Central line, control was passed to a new operations centre in Wood Lane.

Since then, there has been a lingering ambition to turn the signal cabin into a heritage centre.

Although the original lever frame was left inside, it was later removed. Fortunately, a comparable unit was found in Hainault, and is now being converted/restored to match what was removed from Epping.

A debate did exist as to whether to restore the Hainault unit to its original state, or convert it to the Epping layout, and as most of these units were built from modular pieces, it makes sense to restore the Epping design. 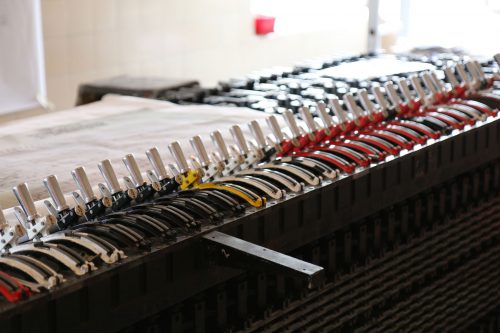 That also means they can put up the Epping signal arrangement, and the long term plans are to wire the restored unit to a computer display so that visitors can play at being the Fat Controller and run the signals as they would have been at Epping.

For some reason, London Underground isn’t keen on them reconnecting to the live tracks outside.

Currently, work is going on to rebuild the locking arrangement which is essentially a gigantic series of cross bars which move up and down or sideways with each pull of the levers. If the correct combination of other levers is in the correct place, then the arrangement of bars below will permit your lever to move.

It’s essentially the same as the key to your front door, but on a much larger scale.

Here, if the lever does move, then horizontal bars can also adjust, and they control the electromechanical switches that power the signals and junctions. 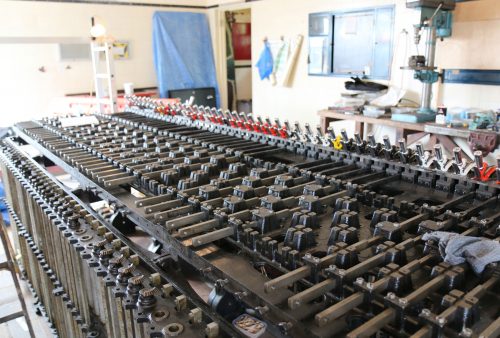 It’s a remarkable contraption that would today be replicated on a tiny piece of silicon chip and in computer code. Although the code would pretty much do the same thing, so you are looking at computer code rendered into physical form.

And see it you will — as one of the possible plans is to replace one of the metal plates that cover all this lovely mechanical wonder with a sheet of glass so the hidden movements within can be seen in action.

At the moment though, this is a room of engineering tools, of grease, of drills and oily rags. Many of the fitments are being made by hand to a design laid out on a schematic diagram of baffling complexity. It’s as much an art as engineering, and there are few people left who can do this sort of work. 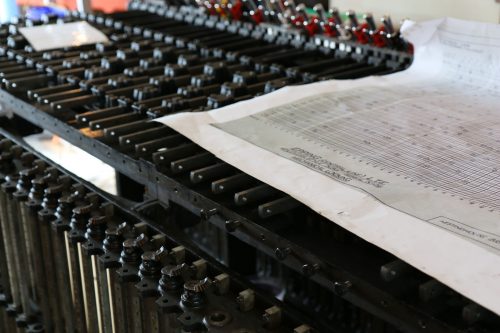 A lot of the equipment is being either polished up from the recovered unit, or made afresh.

The levers themselves were in a sorry state, but have been stripped down and repainted to match the Epping colour coding. 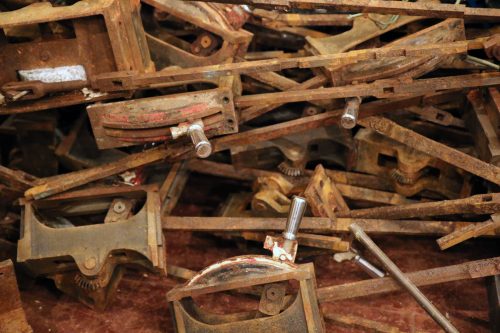 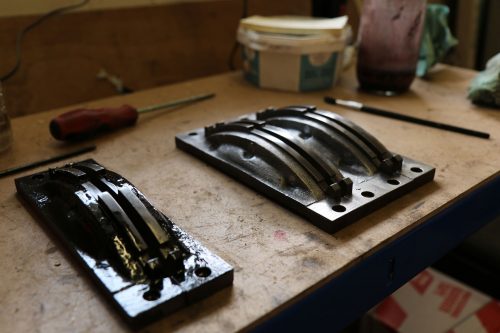 There will be a fundraising opportunity in the near future to sponsor your own lever, and visit the signal cabin when it is ready to pull your own lever and see the display board light up once more. 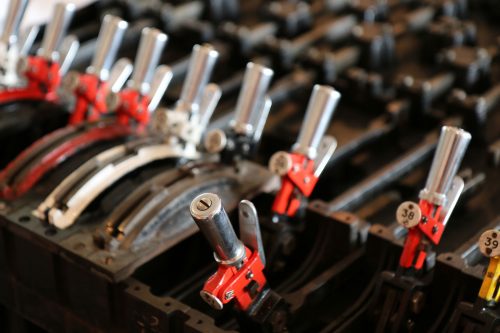 As with most signal cabins, the control room is on the first floor, and here the ground floor housed the relay switches. The plan is to turn this space into a museum, although at the moment its filled with a lot of clutter waiting to be cleared out or cleaned up.

Fascinatingly, under the staircase seems to be just empty space, but it used to be a cupboard — for the old oil lamps would have been used to light the signals at night.

Unsurprisingly, access isn’t easy at the moment, in part due to the need to install some fencing to stop people wandering onto the live railway, but mostly because there is a lot of very delicate work going on to finish the lever frame.

The intention is to open the signal cabin to the public when possible, but they are still looking around for volunteers to help with general DIY works, and of course funding.

Anyone who sends a donation will be granted 1 to 1 access to the cabin to see what their donation has achieved.

At the moment, the leaky roof is being repaired by a local firm of contractors. The walls are being repainted, the old kitchen needs a lot of work, and of course, there’s always someone needed to make a fresh pot of tea.

More details about the restoration project is here.

The people behind the project also happen to have an old locomotive engine on the site which is also being restored. Doesn’t look like much, but its history is as curious as that of the Epping railway area, and more about that another day.

Thanks to the Epping Signal Cabin/L11 team for the site visit.