A report from the Mayor of London’s office has outlined some aspirations for railway upgrades over the next couple of decades, including extending Crossrail and the Tram service.

The long suggested extension of Crossrail eastwards out towards Ebbsfleet is being supported by the Mayor’s office. An extension could support the 55,000 new homes and 50,000 new jobs planned along the route in Bexley and north Kent.

The project itself would need to be “government led”, implying no Mayoral funding for the extension.

One major proposal to get support is the West London Orbital railway, which could link Hounslow to North London by upgrading the freight-only Dudding Hill railway near Neasden.

Another plan that’s been in the system for years without being built is an extension of the tram network to Sutton.

In the longer term, a further extension beyond Sutton town centre to the planned London Cancer Hub at Belmont, which may accommodate up to 10,000 new jobs, will also be considered to support the full development of the site. Trams could also run direct from Sutton to Wimbledon, linking to Crossrail 2. 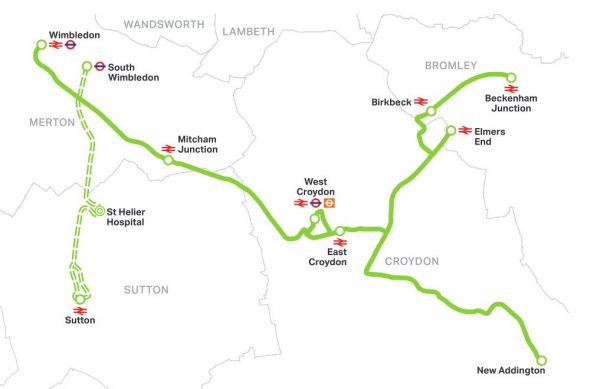 It’s noted that the funding has to be locally sourced though, again implying limited TfL funding for the extension.

One area that is being looked at as a possible way of funding a “major infrastructure project” is a Development Rights Auction Model (DRAM), where large plots of land around transport hubs are built up by TfL, and then sold off, with TfL taking a share of the profits.

This may be for Crossrail 2, as the property value uplift that came from Crossrail and the St Pancras improvements massively exceeded expectations.

One other possible addition is a new train station in Dagenham, on the C2C line halfway between Dagenham Dock and Rainham. This would be supported by an existing housing development planned at the nearby Beam Park.

Overall, the document is long on ambition, and lots of talk about how TfL will work with local partners to unlock opportunities, but no hard concrete plans were given additional funding at this stage.