Just along Margaret Street from the awesome gothic style church I wrote about a few months ago, lies another of those tiny lanes that I am finding increasingly fascinating. Marylebone passage is an oddly disappointing little alley, as it looks like it should be packed full of history, but I have had a heck of a job finding anything about it. 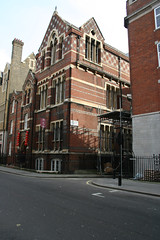 Allegedly, what is left is the remnants of an ancient pathway which used to snake from Oxford Street up to the River Bourne in Marylebone village, and indeed if you look at the road you can still see bits of the old cobbled street under the modern tarmac.

Looking at old maps unfortunately don’t go into sufficient detail to show the pathway existing before Oxford Street started to get built up and by then the path had vanished under other buildings. An 18th century map shows just the bit remaining which we see today – although there is a side street off it which no longer exists.

There is little else I can find about this little road – save that there was once an Ale House on the road, the Golden Lion – which was used after it closed to house paupers working the local fields which were donated by the Earl of Oxford to the local Parish in 1731 – which certainly confirms the long history of the passageway.

Approaching the street from the Margaret Street side, you might notice on the left side the Fo Guang Shan Temple, a Chinese venue which sometimes plays music which you can hear through the windows. On the other side facing this Chinese religious temple, is a very Christian one. There is the London office of the Jesus Army, a particularly militant version of Christianity who can often be found outside those dens of sin – the nightclub – exhorting people to stop enjoying themselves and turn to Christianity. 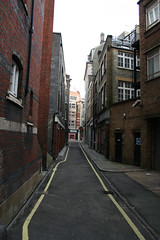 At the time of visiting, this part of the passage was covered in scaffolding, so the photos are less than spectacular.

Heading down the passage, you get to the corner and look up to see the old church which has been completely surrounded by building still peeking out above them. Turning left at the corner, you can see the long length of the passageway and head along. On the left look up and you can an old painted sign showing that the area was once at least busy enough for companies to spend money on advertising themselves.

You can also see some of the old cobbles on the right side as you wander along and make a stop about a third of the way along and again look up at the left side to see more faded advertising from Pring & Rose, and also note the delivery hoist and raised warehouse entrance. You can also see more cobbled stones in the corner here, and an old blocked off doorway. Heading out of the passageway, you might notice the florists sign still attached to the wall – although the company itself has long gone. 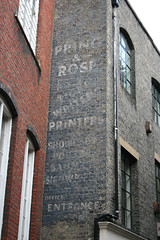 Facing you as you leave the passageway, on the opposite side of Wells Street would once have stood the Tiger public house – but the venue is now occupied by a modern building, and a gay sex shop.

Incidentally, passageways such as this were known as “unions” in the 18th century, as they were the union between two roads.