Earlier this year, the Mail on Sunday claimed that the deadly bacteria, anthrax was released on the Northern line as a biological weapons test back in the 1960s.

The newspaper was wrong. 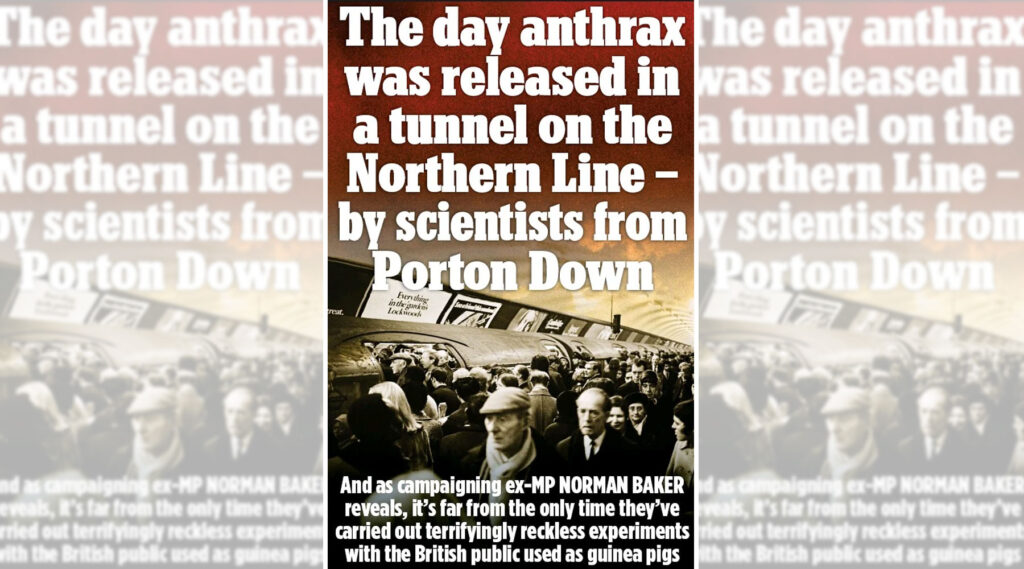 Mail on Sunday graphic from the article

The newspaper headline, as published on 7th February 2021 was “The day anthrax was released in a tunnel on the Northern Line – by scientists from Porton Down”.

The article referred to experiments in 1963 and 1964 where a small package was thrown out of a window of a Northern line train in the tunnels between Colliers Wood and Tooting Broadway. The exact reasons for the test have never been officially confirmed, but it was reported in 2015 that scientists carrying out the tests were interested to discover whether ‘long distance travel of aerosols’ in the tube network ‘was due to transportation within trains’ or through the tube’s air ventilation systems.

It’s certainly the sort of test that would be needed to see how much of the tunnels would need to be decontaminated and how many people would be likely to be exposed to infection if there were to be a biological attack on London.

Naturally, they didn’t use actual Bacillus anthracis (anthrax), but a substitute that is often used in biological contamination tests — a bacteria known as Bacillus globigii, today known as Bacillus atrophaeus and is preferred as its black colour makes it easier to spot when testing swabs for dispersal rates.

Using test bacteria spores to test how far a deadly bacteria could spread seems eminently sensible, if morally problematic in how the tests were carried out while an unsuspecting public was also using the tunnels.

The bacteria was at the time of the tests thought to be harmless, and related families are still considered to be harmless, but today there is a known risk of ill health from Bacillus atrophaeus, although, an admittedly brief reading of some medical texts, suggest that it’s only an issue when people are subjected to high doses and also have underlying medical conditions.

The Mail on Sunday article wasn’t the first to discuss biological tests on the London Underground as the Guardian revealed it in 2001, and the Independent published more details in 2015, based on a book being published at the time, Secret Science: A Century of Poison Warfare and Human Experiments, but they were careful to use the correct name for the bacteria used in the tests.

And although the Mail on Sunday did state in their article that the substitute bacteria was used for the tests, they said ANTHRAX in the headline, a totally misleading claim.

The Mail on Sunday article triggered a complaint to the Independent Press Standards Organisation (IPSO).

In its defence, the newspaper tried to argue that “B anthracis and B globigii were not necessarily two distinctly different things” when they clearly are – one is a deadly bacteria with a famously scary name and the other is something most people have never heard of.

The Mail on Sunday was ordered to change the headline and put a note on the article noting the correction, and this was done on 29th August, a few days ahead of IPSO publishing its report last week.

At a time of baseless conspiracy theories about government plots and dubious health claims spreading online, the last thing we need is a national newspaper contributing to the misinformation. This has flagged up a bit of a failing of the regulation though, for while the Mail on Sunday has published a correction at the bottom of the article, many of the other websites that ran stories based on the Mail’s article are not contacted to update their versions, which means the misleading headline is perpetuated elsewhere.