Magnetic Wands and Giant Dustbusters for the Underground

London Underground is to increase investment in cleaning the tube tunnels of their dirt and dust – not for cosmetic reasons, but because we tend to breath it in and that might not be good for our health.

As it happens, in 2004 a study was carried out into the dust in the tube tunnels, and found that while the composition of dust particles on the Tube was different from that above ground, they also concluded that the dust did not contain components at levels which are likely to pose a risk to the health of passengers or staff.

The biggest issue on the tube is ferric particles, that come from the braking of the trains as they approach stations. The black iron particles look bad, especially if you blow your nose after a long day working on the Underground, but they are not harmful in any significant way. The particles are simply too large to get anywhere in the body that’s damaging, unlike say the PM10 and smaller particles belching out of road vehicle exhausts, which can cause long term health problems.

In addition to the iron dust, there is of course, the dead skin and hair shed by the more than a billion passenger journeys carried by the Underground each year.

The Mayor has now ordered a fresh study to see if the situation on the tube has changed since the last report more than a decade ago.

While the tube is unlikely to have changed much, increased ventilation means more surface dust may being drawn down into the tunnels.

In the meantime, more is to be spent cleaning the tube as it is today.

Over the summer nearly 50 stations and five tunnel sections will be cleaned, with industrial vacuum cleaners and magnetic ‘wands’ being used each night in tunnels.

These will collect metal particles and ensure tunnel walls are left clear of accumulations of dust, oil and grease. Air quality monitoring will be carried out at these new locations before and after cleaning to ensure it is effective, with the results informing the frequency of future cleaning programmes. This enhanced regime will work alongside TfL’s current regular deep cleaning of every line, vent shaft, station, machine room and switch room across the Tube network.

TfL will also be exploring and expanding the use of specialist dust suppressants across the network. These are already used at some locations where dust is more common, and are now being considered for more widespread use.

Attempts to clean the air on the Underground are not new, not just for passenger health, but dirt build up damages equipment, and hence reduces the reliability of the train service.

Fluffers, the people who clean the tunnels are a long standing tradition, and there was a short lived experiment with white washing the tunnels, in past to wash off the dirt, and in part to brighten them up. 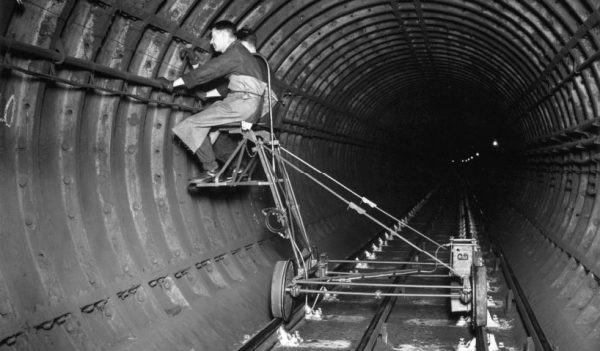 Over the years, various ways have been tried to improve how the tunnels are cleaned.

In 1976, a dedicated cleaning train was developed. An old 1938 era tube train was converted into a massive vacuum cleaner that could be driven down the tunnels to suck away the dust.

Unfortunately, although it could clean tunnels, it broke down a lot, and it sometimes disturbed dust, but failed to collect it. There has been talk of developing a better version, based on some old Victoria line trains, but that plan was put on hold earlier this year. 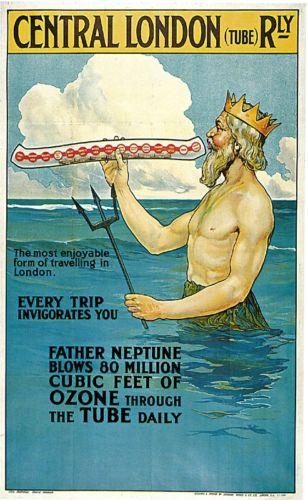 More unusually, back in 1912, an experiment was carried out to pump ozone into the Central line tunnels to make them smell fresher.

The sea-like smell then made some passengers feel sea sick, so it was stopped fairly quickly.