Possibly a slightly expensive gift for the commuting transport geek in your family, but the Transport Museum has grabbed a load of the old luggage racks that used to appear in the soon-to-vanish A Stock trains that spent the past 50 years rolling along the Metropolitan Line (and East London Line for a while).

Considering that the Met Line was the only one to offer luggage racks, they do have a slight sentimental attachment, as putting a bag/coat up there and settling down was slightly more civilised than the crush on the rest of the tube network.

The Met Line did after all tend to consider itself a bit above the rest of the network – with its suburban links to Metroland, and aborted attempt to run all the way to Paris via its own Channel Tunnel. 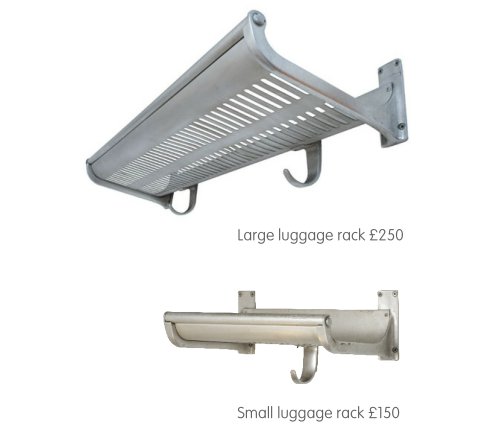 Then again, the Met Line does penetrate deep into the Chalfonts, home to the wealthier commuters, so maybe the pricing is perfect?

Although Annie Mole noticed the somewhat cheaper heritage posters from when the line was opened, and the museum also has some Met Line moquette covered stools and cushions to sell.

Incidentally, when both of us went on the poster tour at the Acton depot the other month, we wandered past huge rolls of moquette stacked up as if it was a carpet warehouse. Tempting! 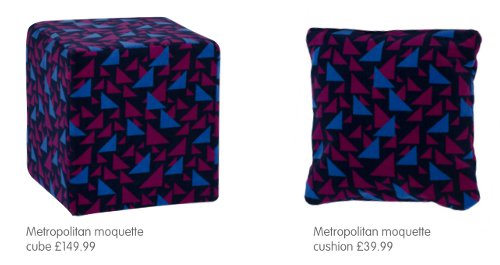 I will miss the old trains when they go, as despite the seating never quite fitting the number of people who sat on them, they had a very distinctive character as compared to the rest of the network. One of the slightly sadder aspect of having so many lines having their trains refurbished or replaced within a decade is a uniformity of design spreading across the network.

At least when you sit on a Bakerloo Line train, it screams “Bakerloo” as did the Met, Jubilee, Circle, etc., but we are getting trains that shape and size apart are becoming very similar to each other, thanks largely to all being built around the same time instead of each line being upgraded with a couple of decades gap between each upgrade. The result of the gaps being that innevitable changes in fashion would be reflected in the trains interiors.

Having a uniformity in design will indeed save a fortune in maintenance costs, but it also seems to be losing something in the way each line had long retained a separate identity in the appearance of their rolling stock.

There is talk of a network tour by one of the last of the older A Stock trains, and my train-geek may take a trip on that, if it happens.

In the meantime, there is still the old 1938 tube stock to delight when it makes occasional excursions along the line.

In totally unrelated issue – when trawling around the Museum Shop website, I found a moquette scarf. Now that is tempting my wallet!