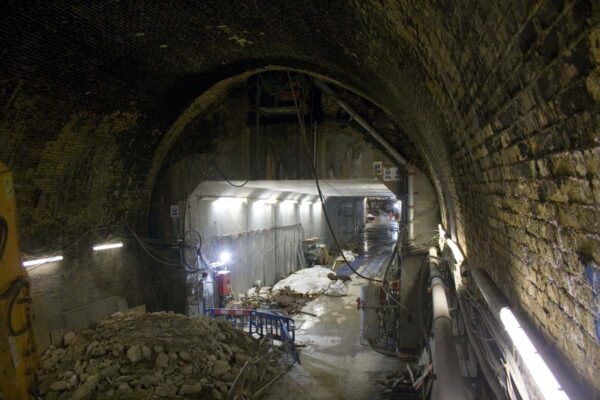 The image above is from March 2014: Photos from the railway tunnel under London’s Docks

Perring through the gates at Crossrail stations Diamond Geezer

Behind the scenes on the nearly-ready Crossrail project BBC News

A megalopolis of engineering: the verdict on London’s £18bn new Elizabeth line The Guardian

West Ealing station is no longer serving passengers into London due to concerns about the safety of a retaining wall. Ealing Today

The stalled plans to build a new railway station at Beam Park in East London looks to be making some progress after the surprising decision last year to refuse permission for it to open. ianVisits

Commuters travelling through Croydon face a further two-month wait for some train services to return to normal after the pandemic. South London Press

Non-stop trains from London to Gatwick Airport running seven days a week are scheduled to resume next month after more than two years. BBC News

Network Rail has pledged to spend £1m on planting thousands of trees across the south of England. BBC News

The proportion of customers choosing to buy electronic train tickets has nearly doubled in the past two years, seller Trainline said as it slowly recovers from the pandemic. This is Local London

‘Spring of discontent’: wave of strikes looms for Covid-hit railways The Guardian

And finally: A statue of the man who created the first tube line Londonist

The image above is from March 2014: Photos from the railway tunnel under London’s Docks