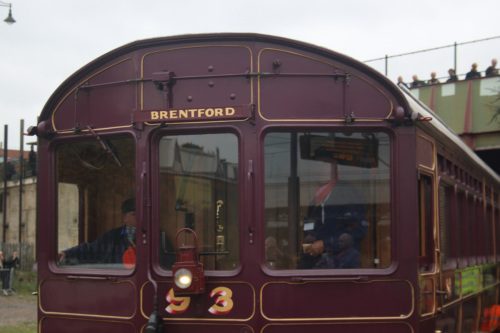 The Night Tube is facing fresh criticism after it is revealed only seven out of the 52 stations open 24-hours have disabled access. Standard

The European Investment Bank is evaluating a £500 million loan to TfL for the upgrade of the signalling system on four lines of the London Underground network. Think Railways

Sound of the Underground: An Audio Tube Map of London Motherboard

Here’s a tube station entrance built in 1999, but which only opened to the public this month. They plan ahead on the Underground. Diamond Geezer

It is the last of the major contracts to be let as part of the Crossrail project, which is now drawing to completion. Construction Index

If you want a sneak peak of what the new stations will look like when Crossrail hands over to the Elizabeth line, a new book has been published all about them. IanVisits

Rail safety chiefs have investigated whether a train derailment at Paddington station was caused because the driver had been fasting for Ramadan. Standard

Tonbridge commuters are facing potential extra costs of up to £1,152 per year, according to a rail industry user group. Times of Tunbridge Wells

Abbey Wood station has come a step closer to completion with the opening of a new Kent-bound platform. Bexley Times

More travel disruption after the RMT announced that workers at Govia Thameslink Railway will strike on September 7. Standard

A community garden project where reclaimed land alongside overground train stations and track is cultivated by local community groups. The Guardian

For years the old Mail Rail tunnels under London have been gathering cobwebs. Now a Leicester design agency is helping bring them back to life for the public to enjoy. Leicester Mercury

Dundalk scientist Laurie Winkless has written a book about how cities work. From drains to trains, she explains how it all comes together Argus

A pair of creatives from Crispin Porter & Bogusky London has created a series of spoof warning signs to promote proper etiquette on the capital’s new Night Tube service. Campaign

Mayor of London Sadiq Khan has announced that a site owned by TfL has been released for development, including 200 affordable homes. The Planner

And finally, Britain’s fastest couple: The husband and wife high speed train drivers who fell in love on the railway Standard

The image above is from Oct 2014: Steam Railmotors return to West London