In the world of Harry Potter is a place – a magical place full of Dickensian shops for the convenience of magicians and students – a place called Diagon Alley. Would it amaze you to learn that such a place actually exists in London?

There is an alley in London which I have known about for some years and wanted to take photos of to write about – but alas, whenever I am near and remember I invariably don’t have my camera, and logically when I have my camera I tend to forget. Today, man and machine were as one – and I finally remembered to take some photos of this delightful, and historic little alleyway. 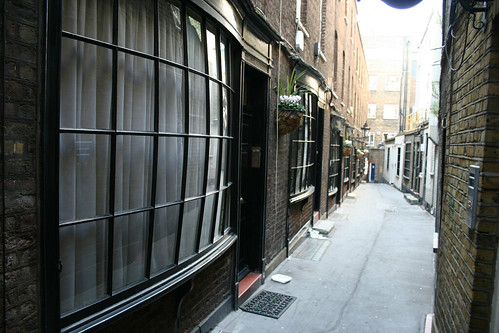 To get here though does not need a magic wand, but just a set of sturdy shoes. Wander along to St Martins Lane, and on the Eastern side you may spy a small dirty alley entrance with a sign to Goodwin’s Court. Do not fret about the squalor, but venture inside with a brave heart and upon turning a slight corner – you shall come upon the delight which is straight out of a Dickens novel (or a Harry Potter book).

One side is frankly, not that impressive – but the other side is, to my amateur eyes a row of Georgian houses with wonderful wooden bay windows, and even more delightfully is still lit by gas lamps. 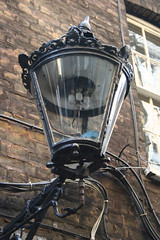 Some of the doors have still the lion-head knockers you should expect of such heritage and despite being in the very heart of Theatreland is surprisingly devoid of pedestrians. This could be partly due to it frankly not being much use as a short cut so not something people are going to use.

According to the Survey of London, Goodwin’s Court first appears in the ratebooks in 1690, replacing Fishers Alley which had occupied a similar position in preceding years, and it seems probable that the houses in the court and those on either side of it, i.e. the present Nos. 55 and 56, St. Martin’s Lane, were erected in that year.

It is therefore a true relic of London history – but I have been unable to find out much more about it alas. However, this is an alley that is worth visiting, not for quaint historic reasons, but for a small dose of nostalgia. 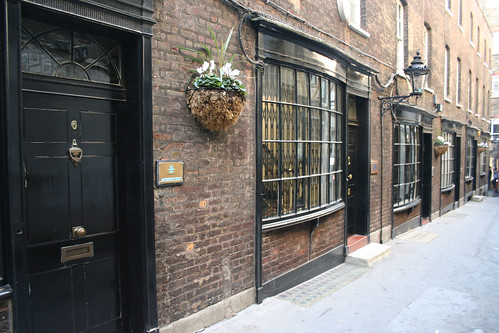