Apart from it’s boxy architecture, the US Embassy in London is also noted for the lake and garden that surround it. Oh, and a US President who publicly derided his own outpost of political power in the UK. 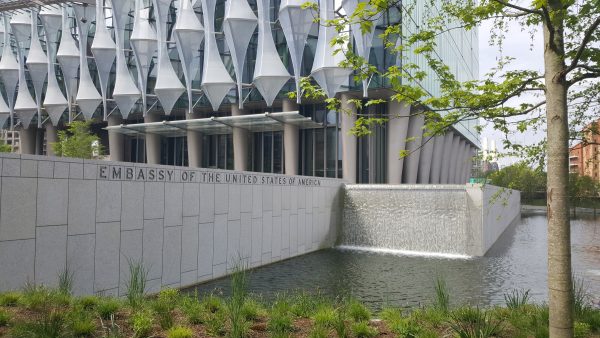 The lake and gardens are an integral part of the new Embassy in Nine Elms, being not just decorative and thanks to water reclamation, environmental, but also part of the defensive structure around the building.

The moat lake only protects one side, the side where high speed vehicles could approach from, and if they were to do so, they’d fall down a sloping garden, into a lake and be stopped dead. That’s if they get past the metal bollards that line the border, and are rather pleasingly hidden between two hedges. 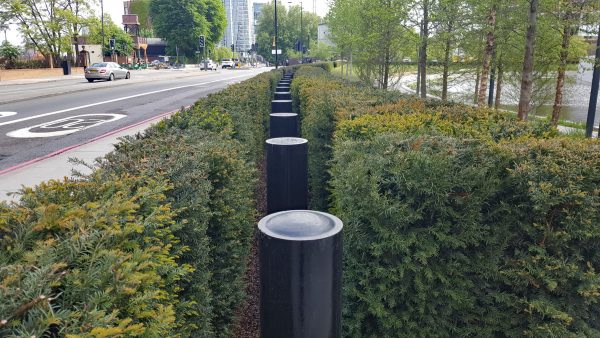 The various forms of protection being therefore more appealing than lumps of steel and concrete so often dumped outside buildings that later require such additional protections.

Alternatives to perimeter walls and fences achieved through landscape design.

Planted with tall grasses and wildflowers, the sloping park area is supposed to be reminiscent of the rolling American prairies as well as the area’s prehistoric time as a Thames wetland. So both dry and wet?

Trees near the pond are North American species such as the Weeping Willow and the Bald Cypress. Others, while native to North America, were long ago brought to England and are now common to the English landscape. 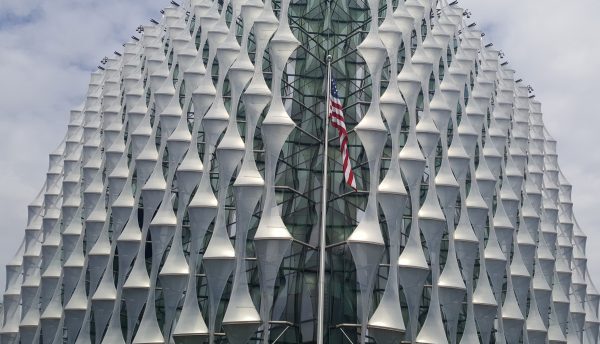 The one downside is that the side the lake and garden front onto is also the least decorative of the building, being unadorned with the translucent plastic screens that cover the other three sides as a sun-glare shield.

Without going inside, I presume the street facing side is also the least likely to have people sitting next to the glass, just in case, so least in need of solar glare protection. 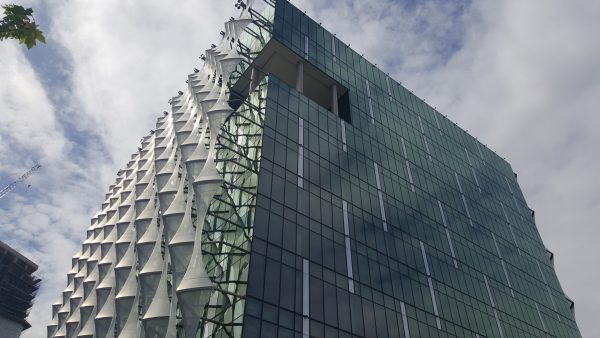 The lake, or pond, depending on how large a lake needs to be to acquire the title, is part of the Embassy’s water recycling system. So don’t drink from it.

Rainwater running off the building is filtered through drainage bioswales before being stored in the lake, where it is then used for watering the plants.

The lake is also fed and aerated by two large waterfalls which not just refresh the water, but help, slightly, to drown out the road traffic noise next to the park. 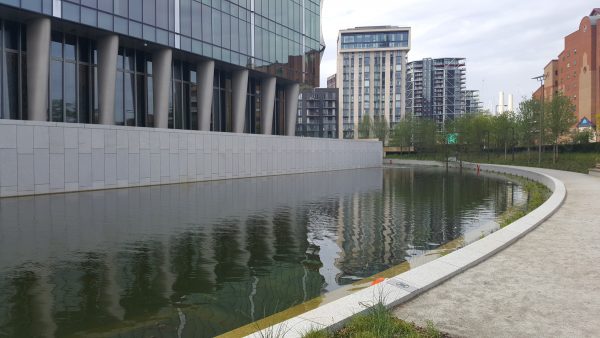 From the outside the building and gardens are far more appealing than the former site in Grosvenor Square, where Visa applications reminded one of returning to the 1970s in how shabby the facilities were, and the bureaucracy of the applications process.

I no longer need a visa to visit the USA, so in a way, am mildly disappointed that I will probably never go inside the building. But the gardens are pleasant enough.