This pocket park covers the remains of St Mary Aldermanbury, a church that was destroyed during WW2, and rebuilt — in the USA. 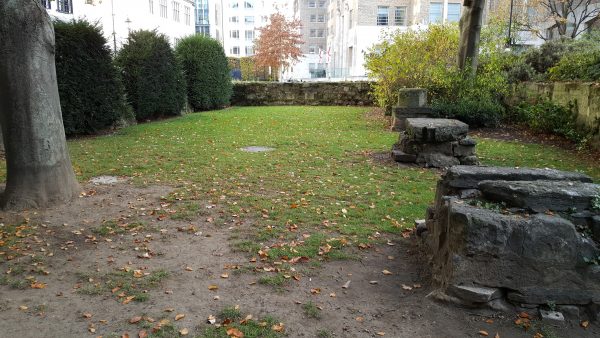 There has been a church on this site since at least 1181, when it was first mentioned in records. Rebuilt in the early 15th century, it was burnt down during the Great Fire of London, and rebuilt, then gutted by the blitz in WW2 leaving just the outer walls and tower standing.

In 1966, the stone walls were taken down, and transported to the USA, where they were rebuilt in the grounds of a Missouri college, as a memorial to Winston Churchill. The significance being that the college is where Churchill made his famous speech that named the Iron Curtain in Europe.

Back here in London, the remains of the church were converted, as so many were, into a public park managed by the City of London.

It is also home to a memorial of its own though, to Henry Condell and John Heminges, key figures in the production of the First Folio of William Shakespeare’s plays and co-partners with him in the Globe Theatre.

Condell and Heminges lived in the St. Mary Aldermanbury parish and were buried in its churchyard. The monument is topped with a bust of Shakespeare, who didn’t live here. 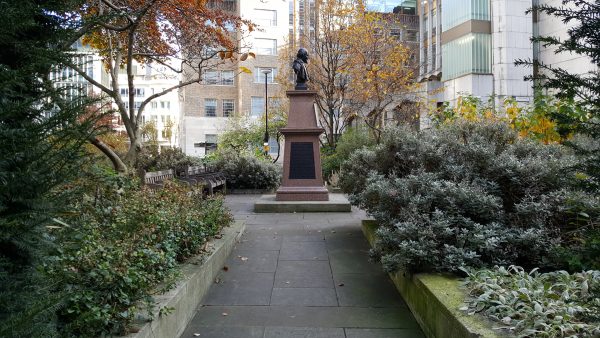 Someone else buried in the site, but not given a memorial, because he doesn’t deserve one is the “hanging judge”, George Jeffreys, who earned a dark reputation for the stern enforcement of the law. His tomb was destroyed by the WW2 bombs.

Today the area is split onto two – with the former graveyard now an ornate garden with box hedge decoration, while the church is lawned and surrounded by park benches. The stone walls offering suitable additional seating, during the summer months. 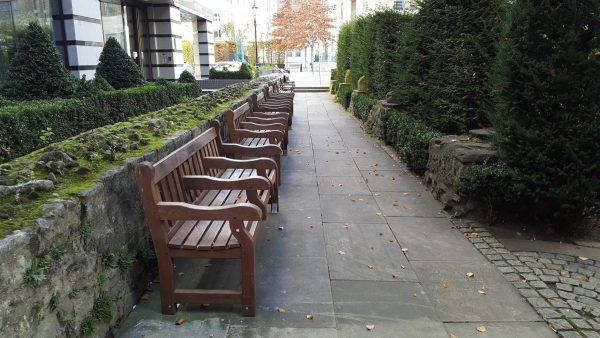 The eastern end of the stone walls are particularly notable, being from the 1437 rebuilding of the church. Sir Christopher Wren built his post-fire church on top of them, and they were uncovered following the WW2 damage. 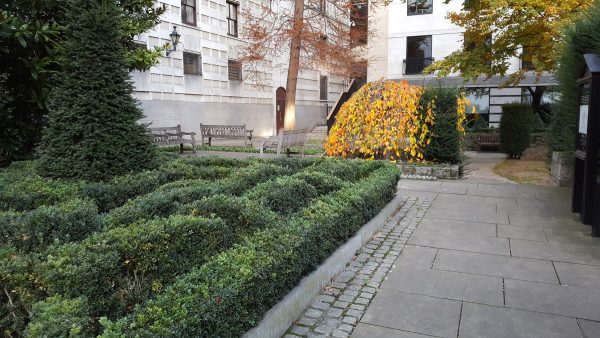 There’s a plaque in the church grounds commemorating the rebuilding in the USA, with an image of the rebuilt church.