This is a a pocket park that you can’t visit – yet. You will be able to soon though as it’s about to be restored and opened to the public.

The Huguenot burial ground at the top of East Hill, also known as Mount Nod is a sealed off patch of graveyard that’s also home to a number of listed tombs and graves. 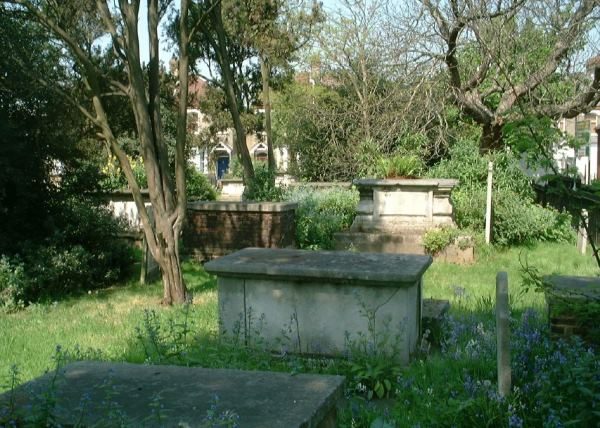 For many years it was unclear who legally owned the land, meaning public funds could not be spent on preserving its listed structures, but earlier this month Wandsworth council was awarded the title deeds and can now carry out work to improve and conserve this historic green space.

The walled burial ground, which covers just under half an acre, lies at the top of East Hill and was opened in c.1687 as a burial ground for the French Church which stood opposite Wandsworth parish church of All Saints, and was set aside for the Huguenot refugees — people who fled religious persecution in France after embracing the Protestant faith.

Many of these refugees from across the Channel settled in Wandsworth, attracted by the cloth and textile mills which lined the banks of the River Wandle — bringing their skills as hat and dress-makers that helped establish 17th and 18th century Wandsworth as a centre of fashion and clothes making.

Today’s Wandsworth borough coat of arms features the tears of the Huguenots – representing the tears of joy they shed at finding sanctuary in this part of London.

Church services in French were performed at the old Presbyterian Chapel in Wandsworth for over a century after the first Huguenots arrived. Victorian social commentator James Thorne, writing in 1876, stated that “gradually the French element became absorbed in the surrounding population, but Wandsworth was long famous for hat making.”

The cemetery contains around 140 small graves, and a number of historic tombs, notably those of Peter Paggen (d.1720) of Wandsworth Manor House, and John Gilham (d.1728).

The burial ground closed in 1854 and today is mainly grass with trees and shrubs around the perimeters. The metal railings were replaced in 2003, but other than that, the grounds have lain untouched while ownership was sorted out.

It contains a number of historic tombs dating from as far back as 1687 while in 1911 a memorial was erected by the Wandsworth Society in memory of the Huguenots and their contribution to the life of the borough. A number of the tombs are in a dangerous state and need to be restored before this pocket park can be opened to the public, but when it does, it’ll join the many other former parks that are home to the dead, and offering leisure to the living.