This is a very well hidden little pocket park that can only be found if you’re minded to slip through an alley to discover this former church graveyard. 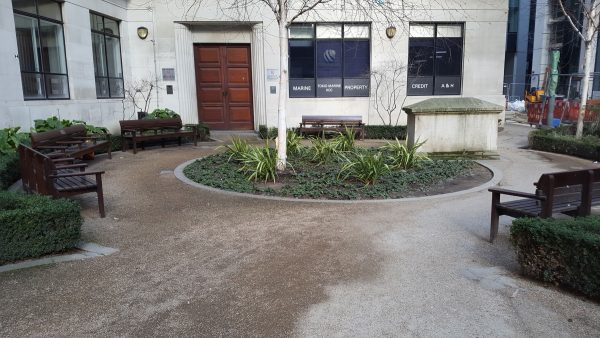 The church of St Gabriel Fenchurch can be dated to at least 1331, but it was destroyed in the Great Fire of London and never rebuilt. The parishioners moved to St Margaret Pattens, and the space was left vacant as a graveyard.

It wasn’t until the post-war rebuilding of the City that the graveyard became more formally a park, when the owners of the buildings surrounding it paved over the area in 1960 and what was a road, Fenchurch Avenue, was closed to road traffic and became an alley.

In 2008 the site was re-landscaped with new paving, seating and planting. The rectangle has been laid out as two circles, with the occasional grave stone and tomb remaining as a memory of its former occupation.

A public sculpture ‘The Gilt of Cain’ was unveiled by Archbishop Desmond Tutu to commemorate the abolition of the transatlantic slave trade in 1807. The sculpture, by Michael Visocchi, consists of 17 sugar canes that rise from the ground surrounding a slave auctioneer’s pulpit. 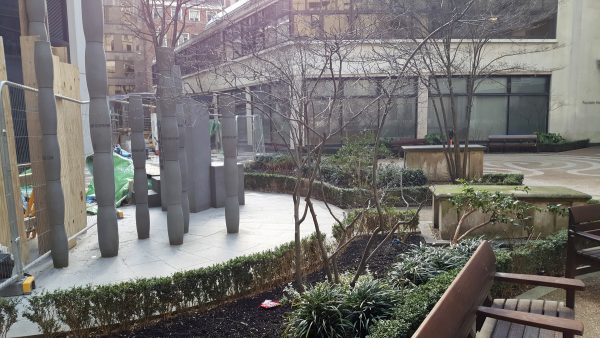 Elsewhere, a small labyrinth fills one of the circles giving the space something more interesting to look at other than the office workers eating their lunches.

The labyrinth was constructed for the neighbouring London Centre for Spiritual Direction in 2010. The idea of a labyrinth has long been a powerful aid to prayer, mindfulness and discernment – in the Christian tradition as well as many others.

It’s also more often used by children screaming in delight as they run around the route to the heart.

A tip to the wise, a labyrinth is not a maze – it has just one route and you can’t get lost when walking through one. So why did Theseus need a ball of string to lay out the route of the labyrinth and avoid getting lost when killing the Minotaur? 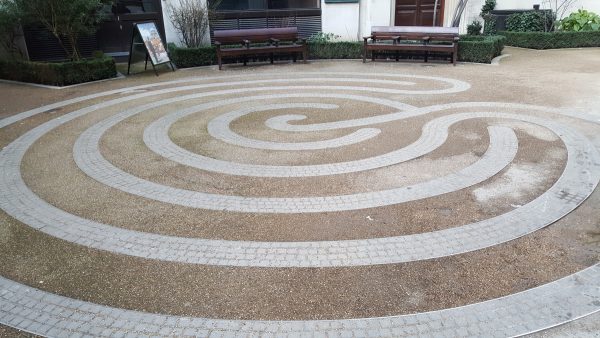 Once found hidden in a narrow alley, the buildings on the Eastern side have been redeveloped, and a much wider passage is being opened up, so while more light and air will percolate into the park, so will more people.