Ebury Square takes its name from Ebury Farm, which used to be where Victoria Coach Station is today. 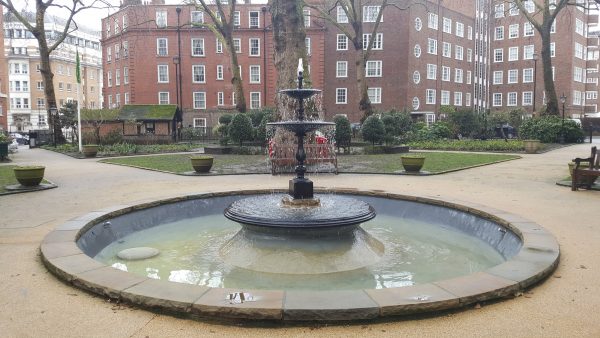 Ownership of the land hereabouts can be traced to around 1100, when it was given to Westminster Abbey by Geoffrey de Madevill, and it remained in the Abbey’s possessions as an important source of hay until Henry VIII seized it in 1536.

Sold to Hugh Audly in 1626, when his great granddaughter married Sir Thomas Grovesnor in 1677, it became part of the super-rich Grovesnor Estate, who still own a lot of land around the square.

The British poet Lord Tennyson stayed at 42 Ebury street and was said to frequent the gardens for inspiration in writing the Charge of the Light Brigade.

Ebury Square was the first Square to be leased to the Metropolitan Public Gardens Association which opened in 1884 was set up to preserve small areas of land and older squares. It was leased to Westminster Council in 1949, who still maintain it.

As a garden it has the air of a municipal space, being mainly wide footpaths to help people get from one side to the other as fast as possible. A fountain in the center at least offers some distractions. 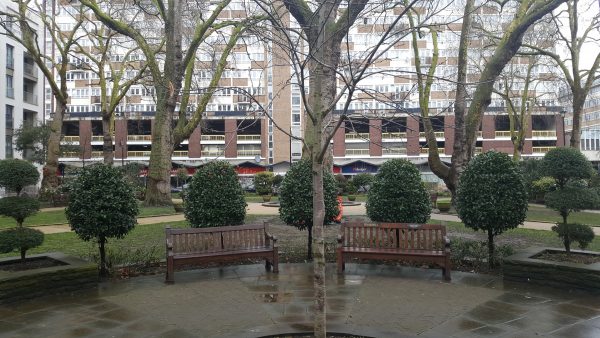 Although the planting can be said to be scarce, it’s the huge plane trees that dominate, and during the summer months, will be casting a very refreshing shade from the summer heat.

In winter, the park is forlorn, but in summer, it’s refreshing.

The surrounds are an odd mix of recently built luxury flats, some older council blocks, and a curious collection of four car hire firms all next to each other on the same street.

A memorial bench reminds us of another local industry, the Victoria Coach Station, being in memory of Rodney Lund, Chairman of the National Bus Company.