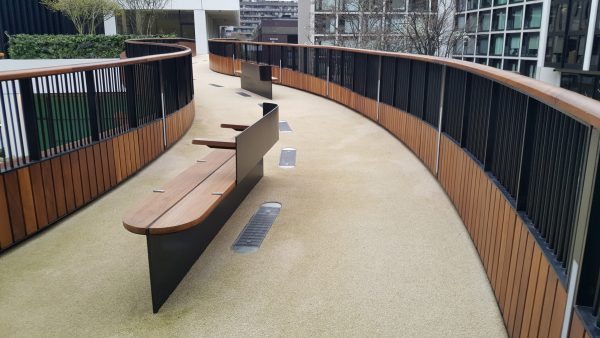 The genesis of their rebirth is the redevelopment of London Wall, the post-war vision of future office developments that became a byword for bad planning. The old 1960s towers have been torn down, and the bland concrete and cheap marble that once turned the road into a canyon has vanished.

The narrow pavement that clung to the side of the street designed to be as unwelcoming as possible so people would use the pedways has been replaced with wide pavements, good lighting, lots of decorative planting, and an entirely new vision of how the pedways should work.

The pedways – elevated walkways for pedestrians — were not an entirely bad idea, born out of a desire to separate dirty cars from people, but the implementation was, of necessity badly carried out.

In the post-war years, the motor car was seen as the future, and a number of wide roads were planned, of which London Wall was one — but at the time, motor cars were also considerably more deadly to pedestrians. If you have four lanes of fast-moving road traffic, the last thing you want are soft squashy humans trying to cross the roads.

Hence the pedways, a series of elevated pavements to keep pedestrians safe. People would be encouraged to go skywards, to a future of the city that was no longer constrained by medieval streets and narrow pavements.

Depending on your perspective, they either elevated the pedestrians or began a process of burying the roads in a future network of tunnels.

Unfortunately, the construction was haphazard. Only in a few places was enough redevelopment undertaken on a large enough scale to build a decent network of pedways. Elsewhere, patches appeared. Walkways to nowhere, ending abruptly or simply never being opened up for use.

Blank spaces where footbridges should have appeared remained blank for decades.

The pedways were designed by engineers at a time when it was thought that the future of urban planning meant controlling human behaviour. Unfortunately, it seems that humans weren’t told about this and resolutely refused to behave as they were predicted to do. Rather than going up and down stairs to wide-open plazas, they clung to narrow pavements, darting across wide roads and all told, being a damn nuisance to the planners.

It was the 1980s that finally saw the dream of a unified network of elevated walkways killed off, thanks to the heritage lobby which did a good job of preserving just enough old buildings on each street to make wholesale redevelopments impossible.

For the past 20 odd years, the network of elevated walkways around London Wall have been allowed to decay. Plants died off, the raised pub closed down, people started to avoid the space.

They became a strange land, half reality, half fiction. A place people could see from the corners of their eyes on streets but few ventured into. Right in the heart of the city, acres of pedestrian spaces lay untouched, unexplored, an increasingly mythic landscape of dank alleys in the sky, of desolate landscapes, of dead ends and dead plants.

The pedways could have been killed off, but London Wall remains an unforgiving chasm in the middle of the City that is as unwelcoming today as it was when built.

The new London Wall development was faced with an opportunity to do something with the pedways, and what they’ve built is marvellous. 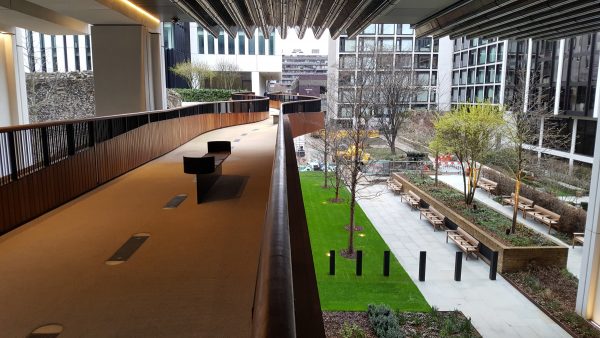 Rather than trying to coral unwilling people skywards, they’ve accepted that people don’t like stairs, so widened the street level pavements instead. A slender bridge leaps across the road, tying the new buildings with the old highwalk that remains.

A new walkway curves around the ruined church, now finally exposed and restored, accenting the stone building rather than constraining it as the old concrete box it was sat in managed to do.

Up here, among the highwalks, they’ve allowed the office block to overhang the space, creating shelter from the weather, but also ensuring that the decoration of the sides of the offices runs underneath. Horizontal columns of black tiles ripple along the ceiling of the highwalk, ending suddenly to create entirely new combinations of angles and architecture. 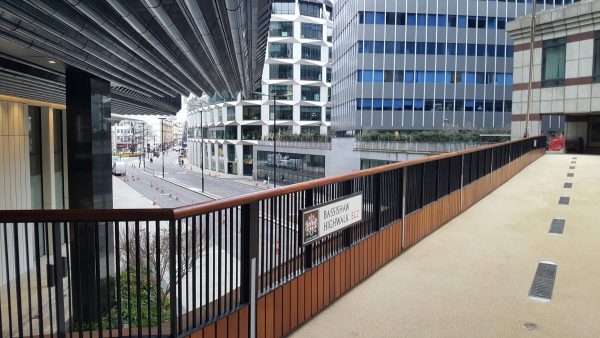 The pedways present different aspects. From the ground, the dark weathering steel offers a rough industrial contrast to the sharply defined black and while steel and concrete of the new offices.

A new staircase is no mere necessary facility to get up, than it invites you to explore. The detailing on the undersides is exquisite, the wooden handrails whisper of luxury, the treads talk of craftsmanship. 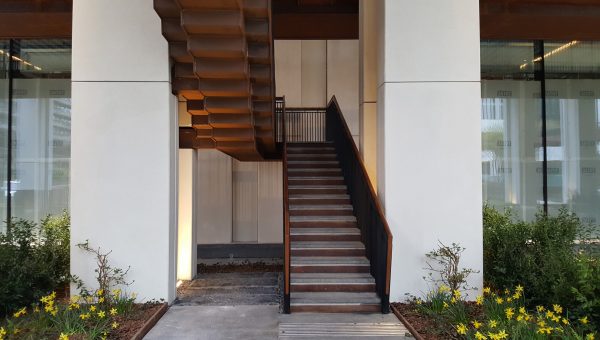 We’re so used to elevated walkways being simply providers of access, a way to get from one side to the other, that the idea that they would be a destination in themselves is a strange one. It can be a surprise to see seating up here. Places to rest and relax on the journey from here to there.

Luxurious seating that matches the drainage slots that slide along the path. Some are ended with curved ships bows, others have armrests and backs to relax in.

Up here, the walkways are soft with wooden panels that weave along the pedway and the rusting steel is hidden from view. At one end, fresh planting creates a small green wall of life. On the other, a still sealed off length running towards Moorgate is richly verdant.

A sinuous curve adds drama to the walkway, and the way that the seating is placed almost encourages people to amplify the curves as they walk around. The pedway dances around the old church. 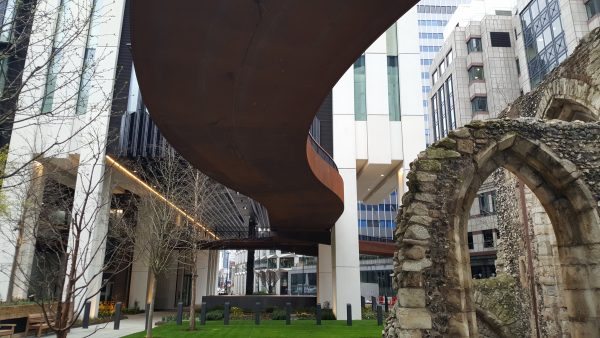 A final hurrah are two bridges that cross the roads, for the polished steel supports that hold them in place. An engineering triumph they delight in their near-impossible delicacy. 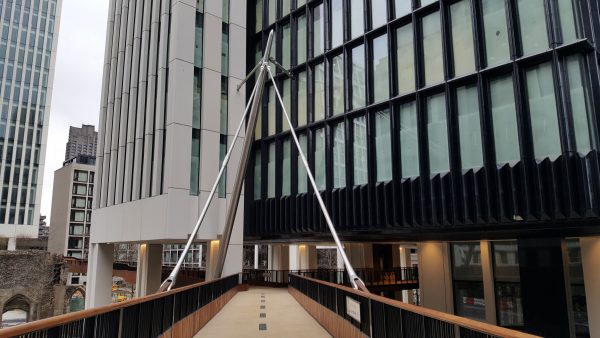 Up here you want to cry out to the people below, come on up, it’s lovely up here. You’re a star walking proudly, caressing the balustrade, delighting in the details.

London’s pedways are back – and they’re magnificent. 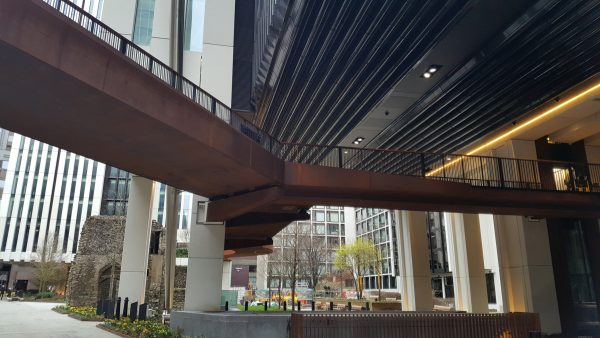 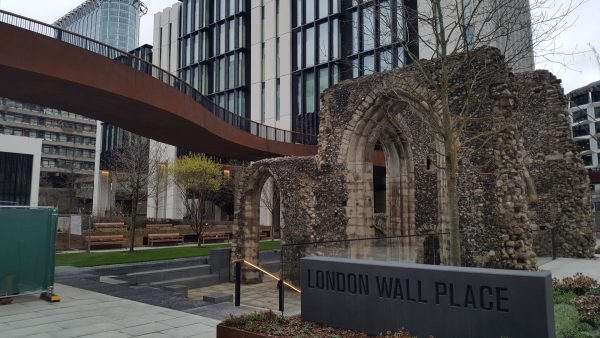 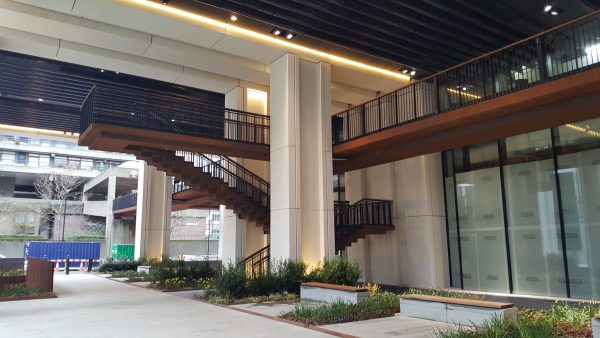 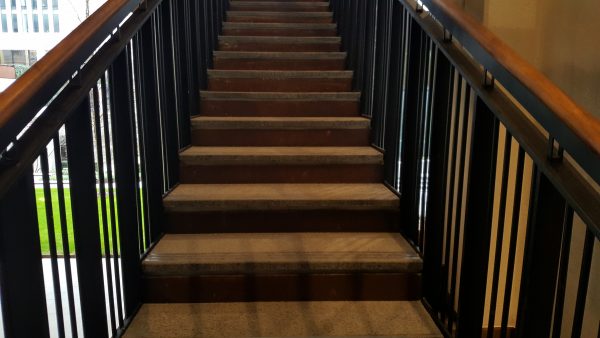 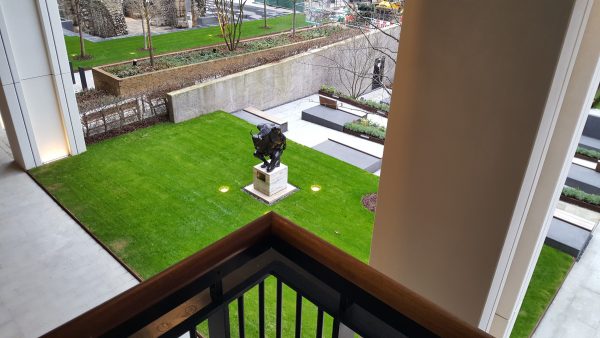 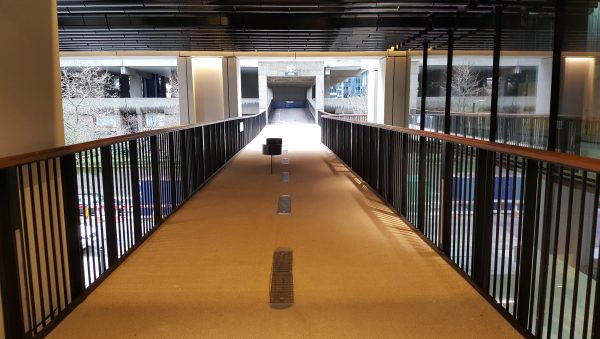 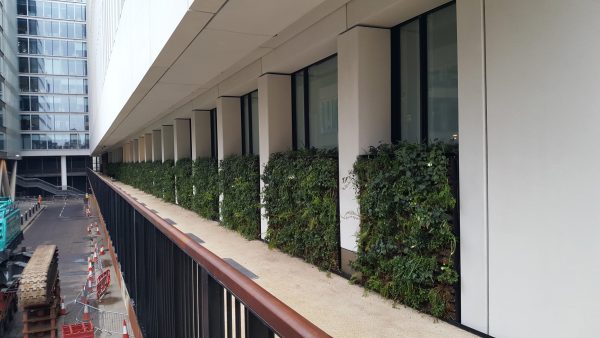 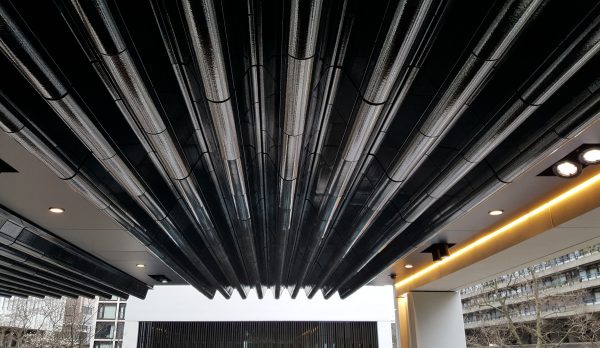 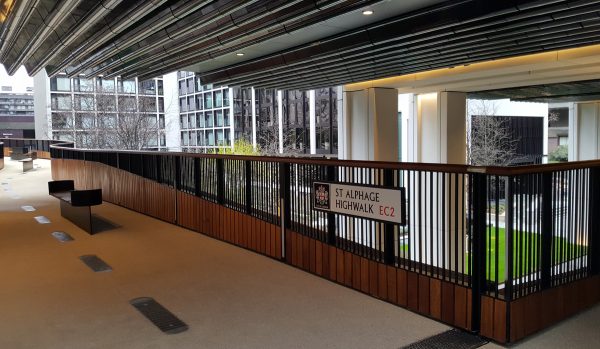 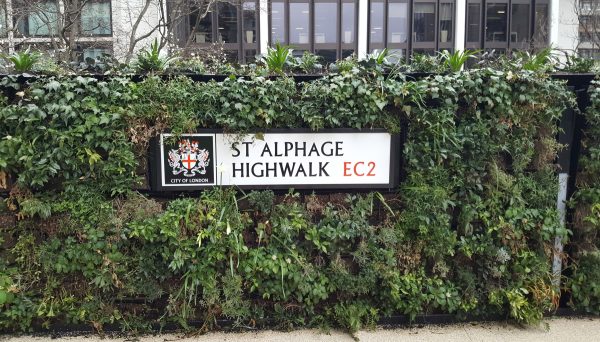 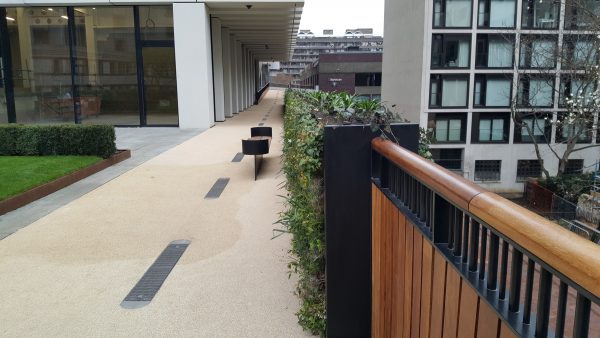 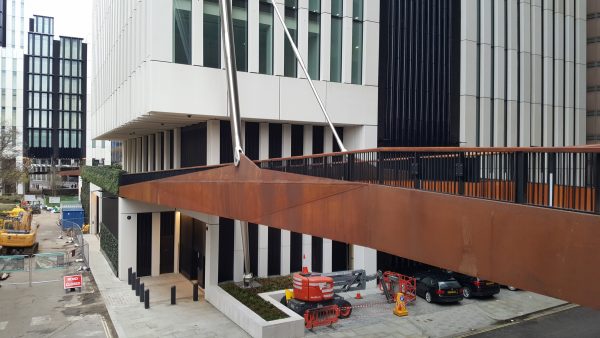