One of London’s oldest buildings has gained its youngest museum, based in a building that owes its existence to the Black Death.

Founded as a monastery next to a mass grave of around 55,000 dead souls, what was officially known as the House of the Salutation of the Mother of God opened in the 14th century, was dissolved by King Henry VIII, became a school, and is still today, hidden behind high stone walls in a back corner of London, offering charitable alms and accommodation to poor men.

Although right in the heart of modern London, thanks to its location in a rather obscure odd corner of a dead-end road, and the high walls, it has managed to exist for the centuries barely noticed by the occupants of this busy metropolis.

But now it has a new entrance in that imposing wall leading over the foundations of the old monastery buildings to the Elizabethan era cloister and chapel.

Although at the moment, the new entrance isn’t finished, but what’s a few days delay when you’re nearly 700 years old?

The unfinished entrance does mean the delight of passing through the old gateway – upon whose doors it is claimed a monk’s head was nailed, upon the orders of King Henry VII — and through the otherwise private courtyard to the new museum. 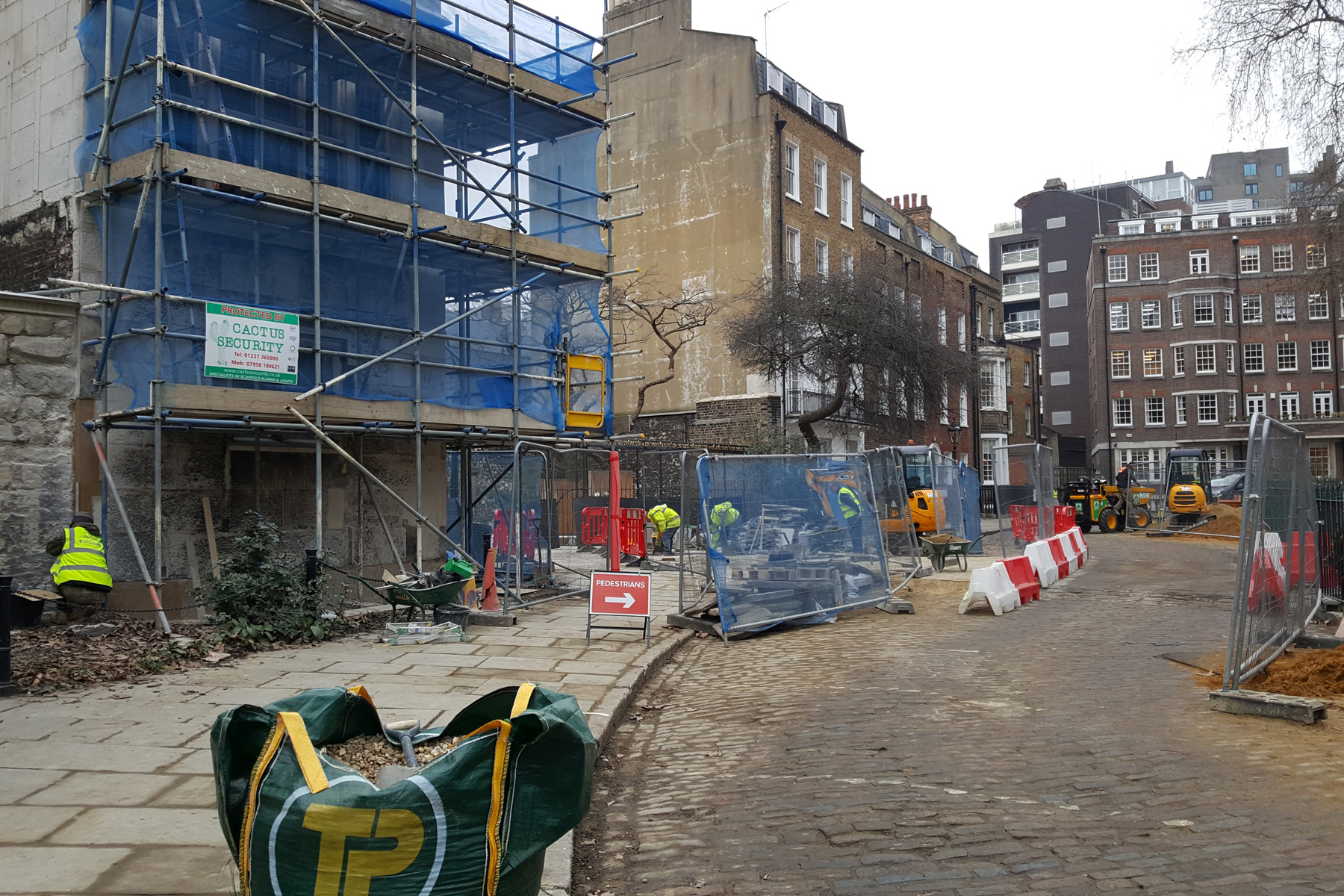 The museum tells two stories, of the people who have lived and studied in the grounds, and then of the site itself.

A cluster of glass cases is interspersed with larger objects, such as old chests, chairs and, from the school, a writing desk.

When the monastery was shut-down, it was bought by Thomas Sutton, a rich commoner, who, being unmarried, later donated the whole site to a charity and school.

The newly named Charterhouse School educated boys in the chapel, while poor sailors were housed in the grounds. The school moved to Surrey in 1872, leaving the walled grounds in London to the almshouses. 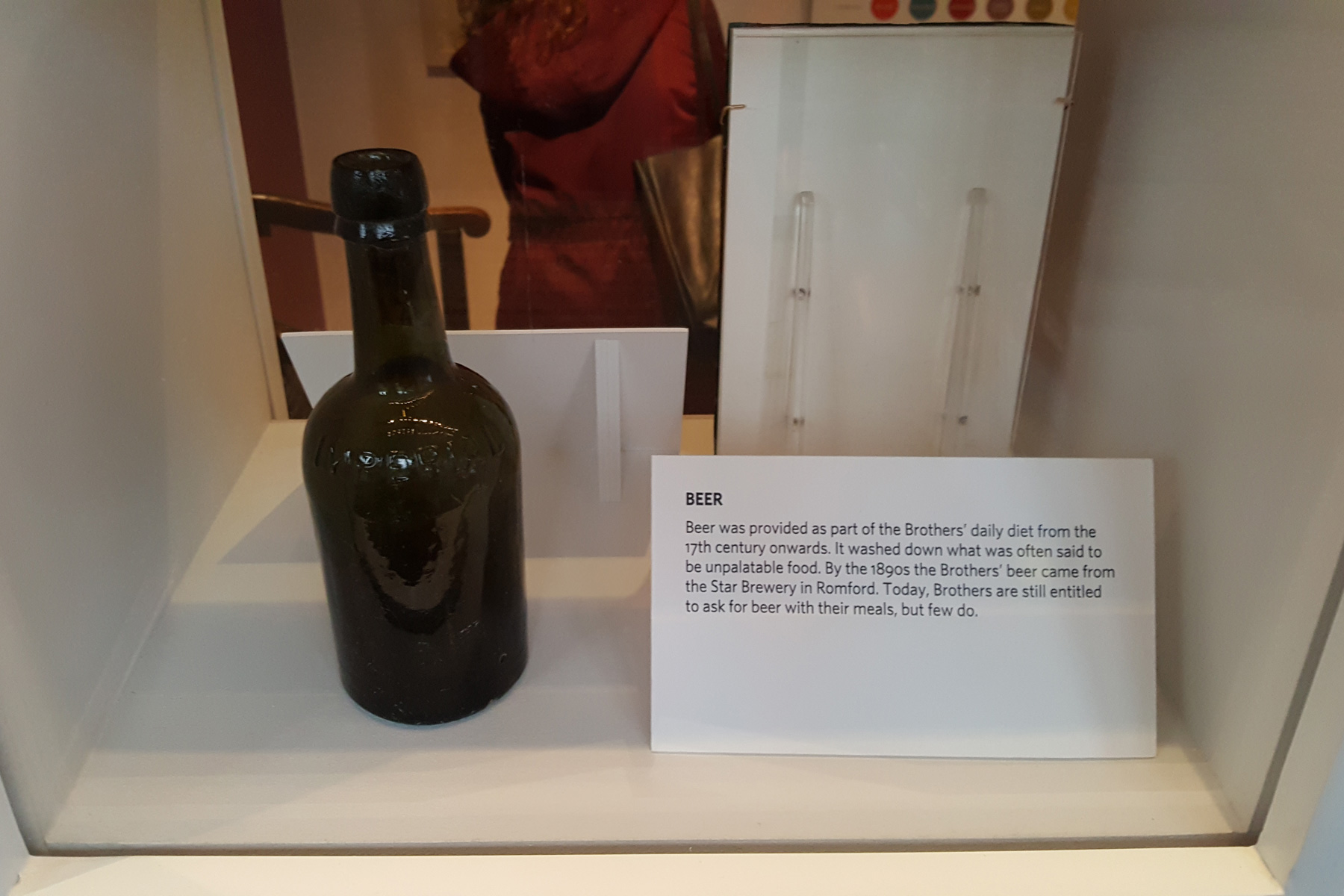 Your visit to the museum also includes the chapel, with the impressive tomb of the great philanthropist himself, Thomas Sutton. He may have been generous, but possibly not modest, as his extravagant funeral cost £1,673, which was a staggering amount of money at the time.

But he did leave a legacy, which in today’s money would be worth several hundred million pounds, so a bit of ostentation is probably forgivable. 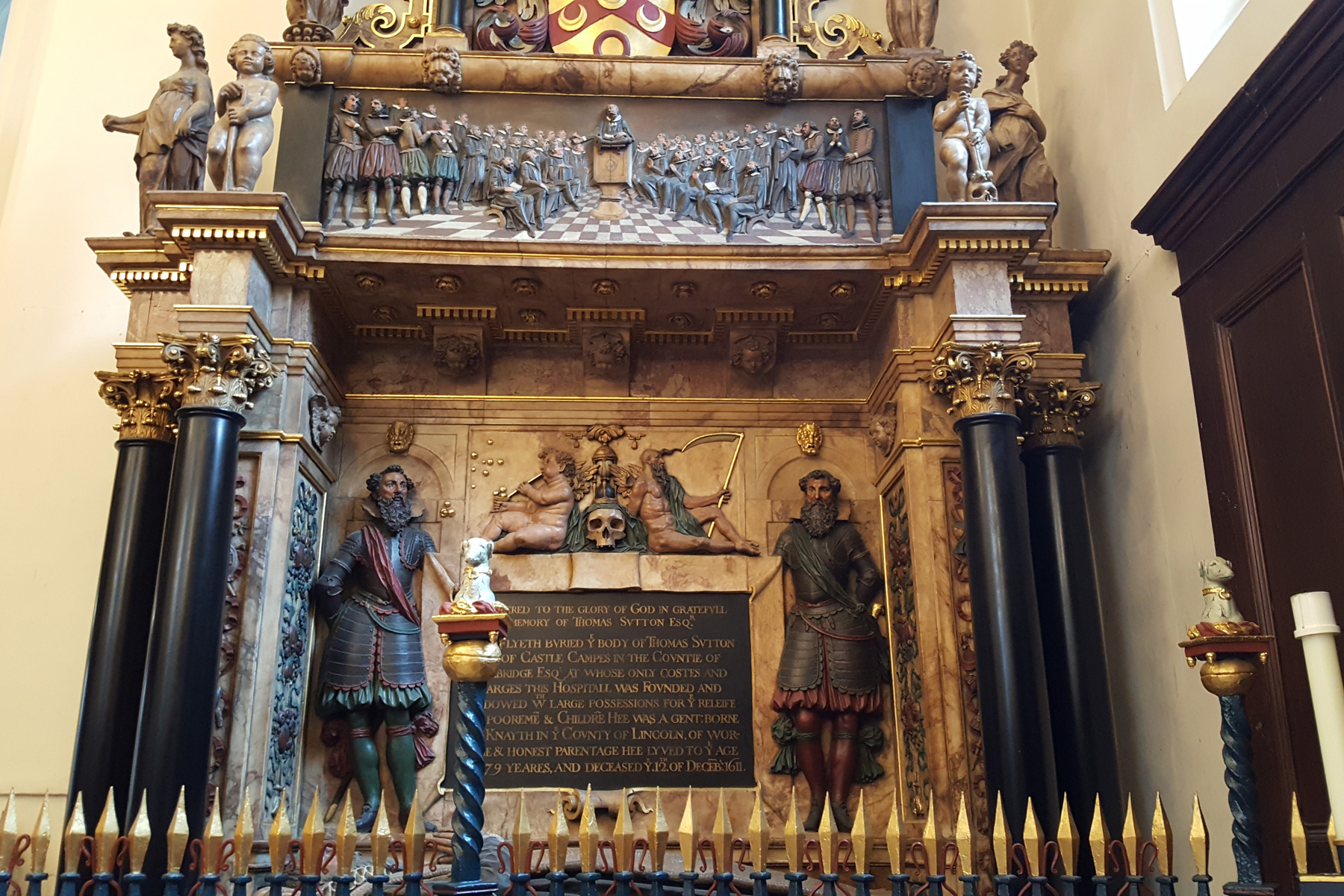 The history of the school at its time in London is recounted in letters and objects — such as the “strike” in 1740 lead by one pupil who has been punished for abusing a maid. He was later expelled.

A book records the misbehaving boys, who if naughty three times in one week would be flogged. An attempt to replace flogging with fines in 1818 was opposed — by the boys — who felt fines to be ungentlemanly. 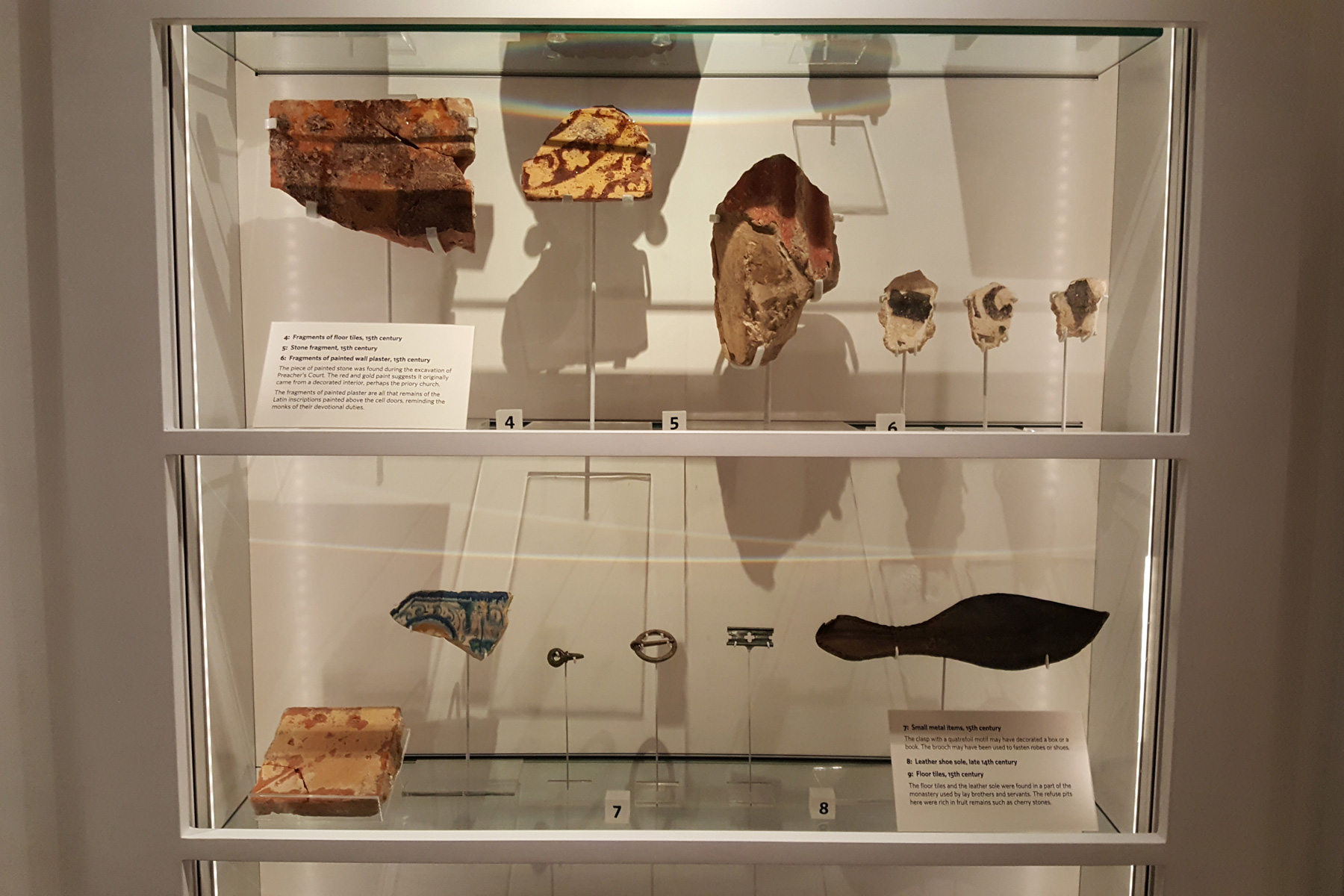 One of the most remarkable relics on display though, is around a corner, a long vellum roll showing the layout of water pipes and sewers serving the monastery

Dating from around the year 1430, it is not just astonishing for the size and detail, but for the exceptional preservation which has kept the colours intact. 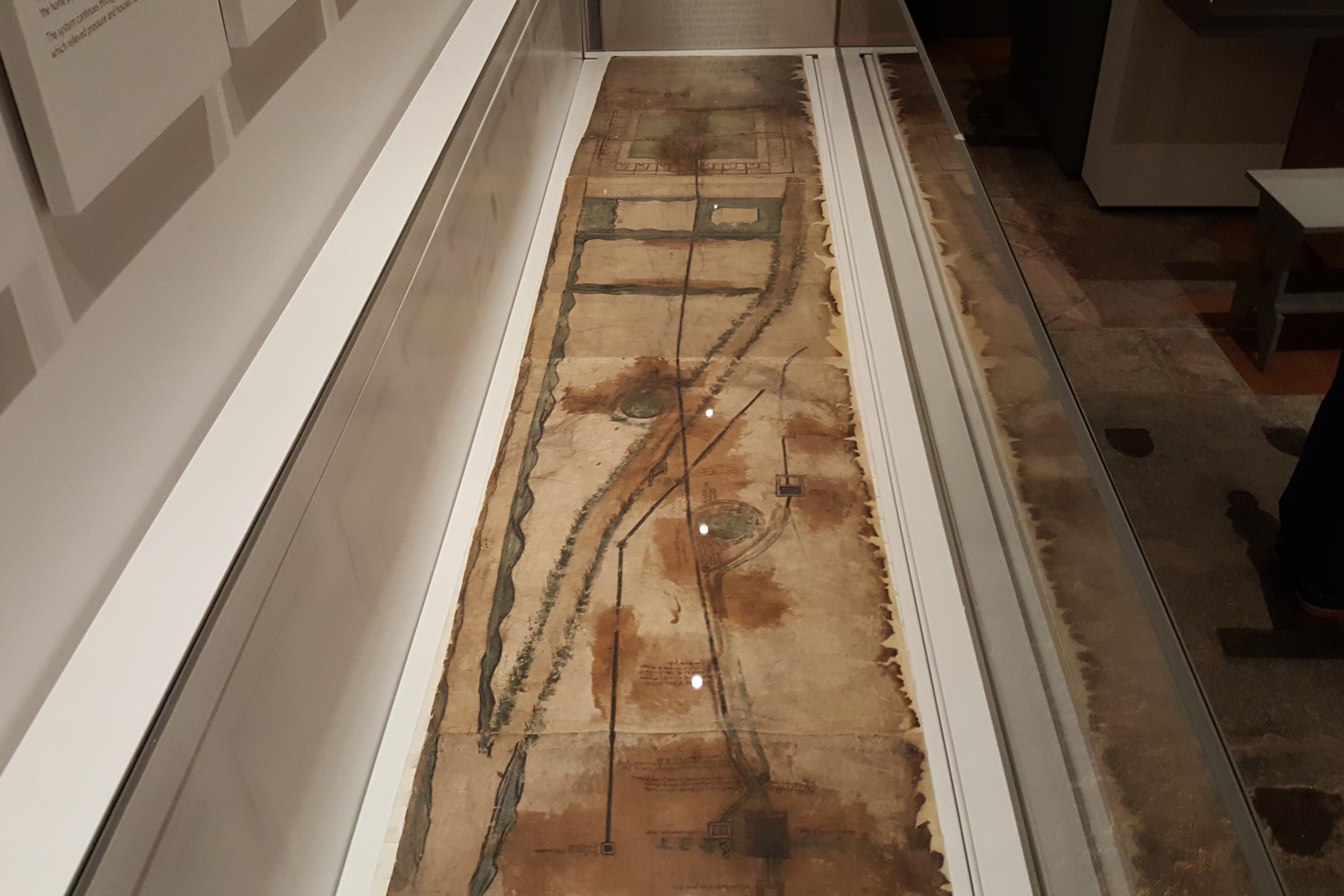 However, it’s how you end the visit to the museum that is a most un-museum, yet utterly perfect exhibit.

In a dark corner, the skeletal remains of a young man is laid out in a gravel bed. Probably from East Anglia, he had a bad back, possibly from hard work, and bad teeth, because that wasn’t unusual. Presumably coming to London to seek work, it was London that killed him.

He died of the Black Death in 1348, and was buried along with an estimated 55,000 other people just outside the gates of the museum, when nearly 700 years later his body was one of many uncovered during Crossrail excavations.

Today, he rests, surrounded by candles in a respectful sleep. A common man given reverence and respect in death never accorded to him in life, while lords and nobles of the time are forgotten and ignored. 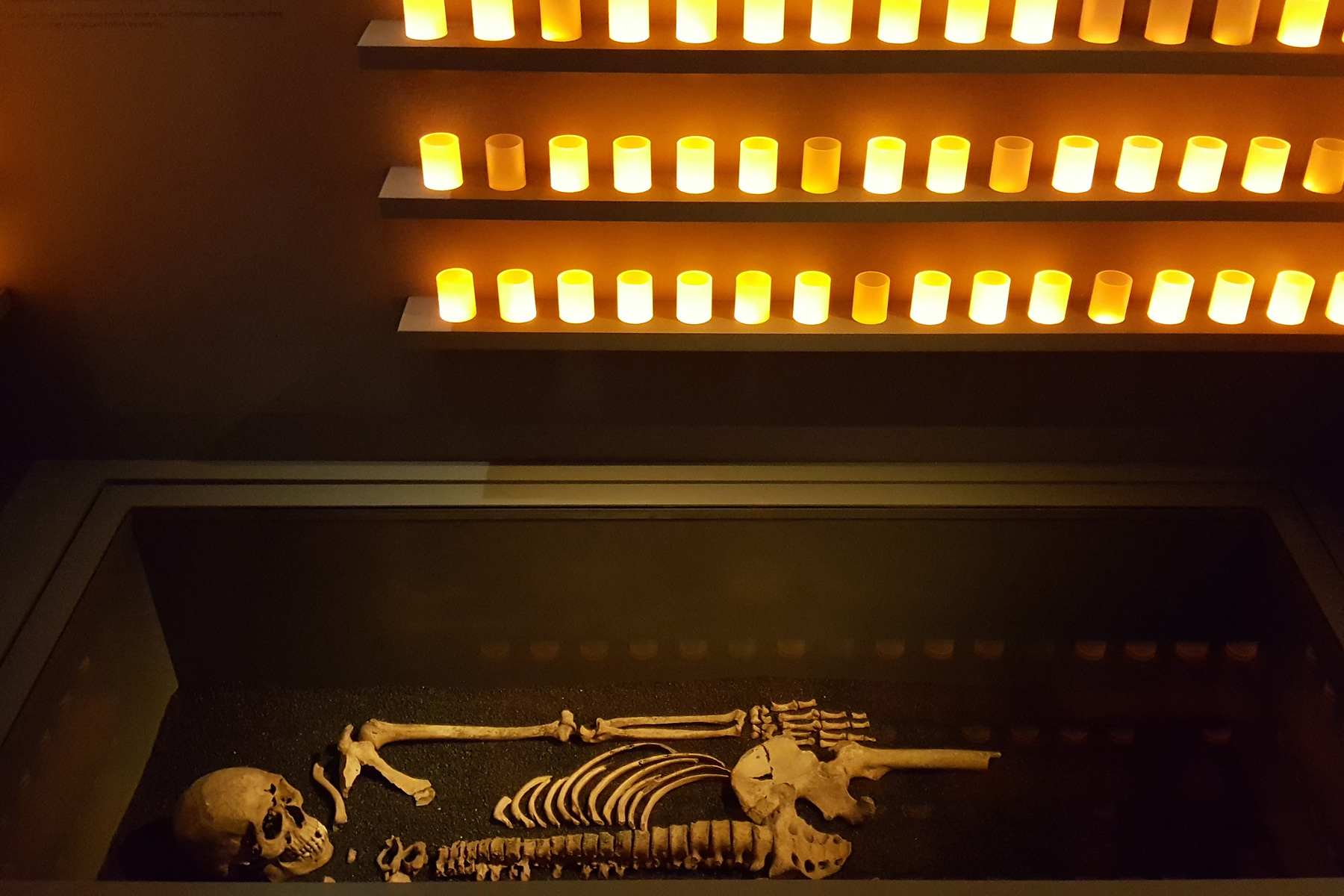 The museum is free to visit, and open everyday except Monday from 11am to 4.45pm. There are also regular tours which include the rest of the site, including the great halls and dining rooms.

NEWSLETTER
Tagged with: The Charterhouse