Continuing the walk around modern London following the route of the lost fortifications erected during the English Civil War.

16) A Large Fort with four Bulwarks, at Hide Park corner.

17) A Small Redoubt and Battery, on Constitution Hill.

Departing thence, I shortly encroached upon Head Park Corner Fort, which is a maine great strength, having one fort above, and within another; and the third fort, closing the road-way, standeth breasting the other two: the utmost inveloped fort, overtopping the other two, is garnished with eight cannon reall; and on the inferiour bulwark, northward, being a second part of the forts maine body, there bee intrusted there five brazen half-cannons more; and before it, towards the fields, a breasting countercarp: the third dependant fort standeth enstald with six demi culverines; amounting to nineteen of all. This great fortification is but only pallosaded and single ditched, yet wonderfull strong, and of great bounds; all the three having seventeen angles. And this is the westmost fortification, enclosing the park, the fields, the large mansion, and other enlargements belonging to S. James his liberty. 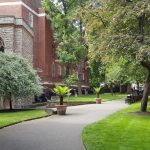 Head along Mount Street, and go just past the junction onto the pedestrianised area, and turn left into a church courtyard.

This is Mount Street Gardens, and its the old burying ground, not of the impressive church you’re standing next to, which is Roman Catholic, but the small chapel at the far end of the gardens.

If the door is open, pop into the Church though, which is a masterpiece of the Gothic Revival. If the door is closed, you can try the main entrance, around the corner on Farm Street. 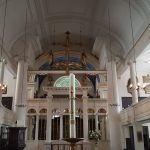 Head along the park otherwise, and leave by the exit next to Grosvenor Chapel. Built in the 1730s, this church is usually open to the public, and is a rather nice austere Georgian era building.

At the chapel though, turn right and head north up towards the soon-to-be former US Embassy, and walk past the Ronald Reagan statue, and the frontage of the US Embassy to the far side.

This modernist building was constructed in the late 1950s to a design by the Finnish American modernist architect Eero Saarinen, with the famous 11 metre wide bald eagle on the roof. 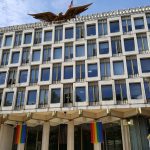 It’ll be converted into a hotel when the US Embassy moves out to their new building near Battersea.

At the top of Grovesnor Square, turn left onto Upper Brook Street and head along to Hyde Park.

Here, you can cross the road over to Hyde Park, but do pause for a while and pay attention to the memorial in the middle of the road, to the animals that died supporting mankind’s wars. 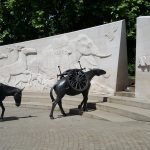 There’s more to see on the back of the memorial as well, do wander around and have a look.

Once you’re in Hyde Park head southwards again, until you get to the Joy of Life fountain. Installed in 1963 it replaced an earlier fountain that sits on top of a since filled in water reservoir under your feet.

However, this is now one of the more interesting bits of the walk. What you might notice looking ahead is how rough the landscape now is.

Although not conclusively proved, there is strong opinion that this is in fact the remains of the civil war wall that ran along here. The churned up soil shows up in John Rocque’s Map of London of 1746 as a distinctive land feature along here. 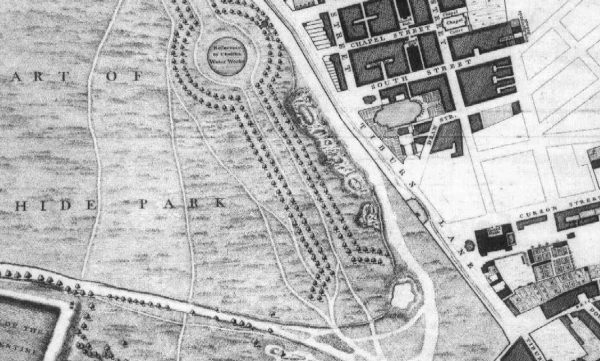 So, if the ground is dry, here’s a chance to not just walk the route, but walk on the actual wall itself. It’s a bit rough to walk over, but really do take the effort as its a chance to see just how large the wall probably was at the time. 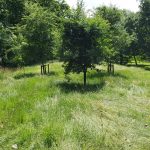 Even now in its collapsed state it’s an impressive set of earthworks.

Head towards Hyde Park Corner, and here lay one of the more important forts, as it overlooked the main road heading into London from the West. As the Royalists approached London, only to be turned back at the Turnham Green in November 1642, the importance of this fort cannot be overlooked, and that battle triggered upgrades to the entire line of communication around London.

The description does seem to suggest that the 1642 basic fort remained and was later surrounded by the much larger 1643 upgrade.

The next fort along, on Constitution Hill isn’t mentioned in the walk by our Scottish friend for some reason.

18) A Court of Guard at Chelfey Turnpike.

19) A Battery & Breastwork in Tothill Fields.

Thence drayning along a devalling trench, through Milk-field, toward Tuttle-fields, I rancountred with two half-moon workes, some ten paire buttes distant, both of them pallosaded, barrocaded with irne picks, and each of them planted with three demie-cannon of brasse: both these works stand sighting Chelsay. Whence, breasting along the breastworkes, I happily imbraced Tutlefield Fort, my familiar ground, of old acquaintance. This fottresse is composed of nyne angles, being pallosaded; and only double ditched, and surcharged, at the south and west corners, with six pieces of ordinance, and a court du guard.

Here is an end of Midlesex labour; from which postemall place, I courted the river syde, and crossed over to Lambeth, in Surray: 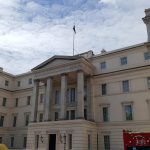 Cross over Hyde Park corner past the Lanesborough Hotel, which used to be a hospital right up to the 1970s.

When the land was sold for to the hospital by the Duke of Westminster’s family in 1827, and option was granted allowing them to buy it back for the original price of £6,000.

When the hospital closed in 1980, the Duke of Westminster exercised the option to buy it back fro £6,000, and it was then converted into a luxury hotel. It was later sold for around £120 million.

That’s long term thinking for you!

Head over to Constitution Hill, and somewhere around the junction stood the small fort.

Now, head back a bit and walk down Grovesnor Place, around the back of Buckingham Palace, and this is the site of the next fort. Yes, the fort is underneath the back gardens of the Palace. Which seems somewhat ironic as the forts were made to protect London from the King.

Specifically, the fort was built in the grounds of Goring House, which was owned by the Royalist sympathizer, Lord Goring. While he was abroad on the King’s business in November 1644, Parliament seized the empty mansion house and used it for themselves, and the fort was installed in the back garden.

The site of Goring House was later rebuilt as Arlington House sits underneath the southern wing of Buckingham Palace itself, while the palace’s gardens occupy the former Goring Great Garden.

In 2006, the Channel 4 show, Time Team found anomalies in the garden, to the west of Buckingham Palace which in their words, may have been associated with the civil war defences. 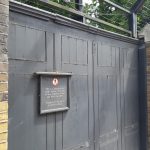 We can’t see the fort, and peering over the wall a most unwise thing to do, so lets head on to possibly the site of the last fort on this stretch of the walk. Incidentally, as you walk along, notice the wooden door about half way along. That’s the exit from the gardens used by tourists visiting Buckingham Palace during the summer months.

Carry on down towards Victoria Station, and as you get to the lower of the two Grosvenor Gardens, pop in to have a look at two curious huts. 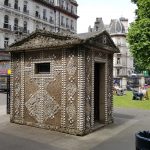 The two shell covered huts were built in 1952, when the gardens were cleared up following their use as air-raid shelters in WW2. They are essentially French versions of the English Folly, but are in practical use, as storage for the gardeners.

Now, the next bit of the journey is a tad difficult to describe as the route keeps changing due to the ongoing tube upgrades, but basically walk around the front of Victoria station until you get to Vauxhall Bridge Road.

At the top of the junction is the very distinctive “Little Ben”, a model of the somewhat larger Elizabeth Tower in Parliament. Installed in 1892, and recently restored, a quirk was lost in the restoration.

It used to be a meeting point for French visitors heading home, so the clock was fixed at British Summer Time, so that in winter months, it showed the correct time, for Paris.

But since the restoration, it now follows British time, which means it’s lost its French link during the winter months.

Anyway, head down Vauxhall Bridge Road, and it’s likely that we’re following the line of the wall, although only by coincidence, as all trace of it had vanished long before this road was built. The second turning on the left is Rochester Row, and pause here. 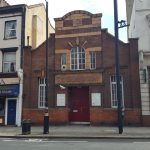 This is likely to be the site of the fort. It’s difficult to be sure, as there were no indefinable landmarks at the time of the early maps to locate it, and we only know that it was in this area.

However, a few later maps show a distinctive earth disturbance at the end of Rochester Row, which was originally built as a street for alms houses in the middle of fields, stopping right by the mysterious mound.

We can only speculate, but it seems possible that of all the places in the fields, this would be the location of the fort.

Now, remembering that the line of the road is a coincidence, we might as well follow what was probably the route of the defensive wall to the Thames. 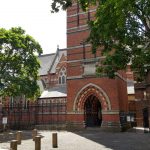 I would suggest crossing over the road though, as on the other side is a rather nice church that’s worth poping into if it’s open. Sadly, on my visit a huge video projection screen obscured the altar, but it’s a wonderfully decorated church to spend a moment in.

Carry on to the river, and here, unlike our predecessor, who had to cross by boat, we can walk over the Vauxhall Bridge.

Part 4 tomorrow, or download all 5 articles onto a Kindle device.