London’s civilian VC to be commemorated

On 4th July 2015, ship’s Master Frederick Parslow, VC, Mercantile Marine, will be honoured with the unveiling of a commemorative paving stone on Islington Green, near to where he was born in 1856. The ceremony will take place one hundred years to the day of his death in an action for his ‘most conspicuous gallantry and devotion to duty’ in which, he became the first Mercantile Marine officer and the first civilian in the First World War to be awarded Britain’s highest military decoration, the Victoria Cross.

On 4th July 1915, the SS Anglo Californian, a British cargo ship, was off the southern coast of Ireland, heading for Avonmouth near Bristol. It was carrying 927 pack horses bound for the Western Front and its Master, Frederick Parslow, was making his eighth such trip of the First World War. 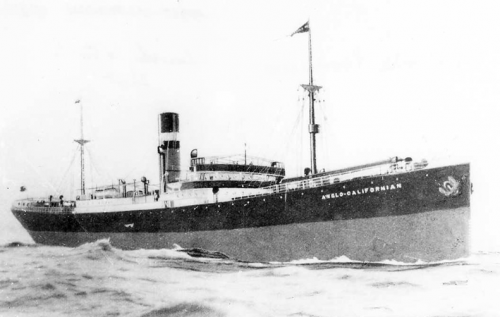 Around 8am, the ship was spotted by the German submarine, U-39. The clear weather revealing no other ships in the vicinity, the U-boat commander decided upon a surface attack to conserve torpedoes. An initial warning shot was followed by the signal flag message, ‘Get into your boats. You cannot get away.’ Merchant ship convoys were not introduced until May 1917, so not only was Parslow’s ship unarmed, it was unescorted too. Parslow called for emergency full speed, 14 knots, and instructed the wireless operator to try contacting any nearby Royal Navy vessels. Capable of 16½ knots on the surface, the U-39 began to gain and informed by its own wireless operator that the SS Anglo Californian had contacted a Royal Navy ship, began firing its 88mm deck gun. Parslow now cleared the open bridge save for the second mate, his son, at the wheel. Parslow faced aft and ordered a zig-zag course, staying stern-on to the submarine.

By 9am, the U-39 had closed to 1½ miles, its firing becoming more accurate. Parslow ordered the crew below and his son now steered lying flat on the deck. At 10:30am, the submarine signalled Parslow to abandon his much damaged ship. Not wanting to risk his men any further, Parslow rang for the engine to stop and ordered boats to be lowered. His wireless operator then passed a message that two Royal Navy destroyers were on their way. Encouraged, Parslow immediately ordered the boats inboard and full speed.

Taken by surprise, the U-boat commander ordered fire to be directed at the bridge, supplemented by a machine gun and rifles. This continued for another hour until Parslow, his ship badly holed and on fire, decided to heave to in the interests of his crew, lowering boats. Even then, the 88mm gun continued firing until at around 11:20am Parslow was cut in two by a shell which also carried away the peak of his son’s cap. As the U-39 closed to within 50 yards, the Royal Navy ships appeared. Fired upon this time, the submarine hastily dived and escaped.

The action that day was later described by a shipping company executive as ‘One of the gamest and most unequal fights ever put up by a shipmaster’, while the crew of the U-39 told the press in the then-neutral America that Parslow deserved the Iron Cross.

Together with the Master, some 33 of the SS Anglo Californian’s crew had been killed as had 30 horses. The ship was taken into Queenstown, now Cobh, where Frederick Parslow and 8 of his men are buried in the Old Church cemetery while 14 without a grave are named on the national Merchant Navy Memorial on London’s Tower Hill. Of the 22, 17 were horsemen, their nationalities being British, Canadian, American, Russian and Finnish. Both the cemetery and Memorial are in the care of the Commonwealth War Graves Commission.

While the Admiralty wished to recognise the gallantry of Parslow and Archibald Smith, his fellow Mercantile Marine Master who died in an action in March 1917, there were reservations about elevating civilians to the level of members of the Royal Navy.

Eventually, the device of commissioning Parslow and Smith as Lieutenants in the Royal Naval Reserve in May 1919 allowed them to be awarded the Victoria Cross. Parslow also received posthumously the Lloyd’s Medal. Frederick Parslow was the first civilian and, at 59, the oldest recipient of the decoration in the First World War.

His and Smith’s are the only VCs to have been awarded within the Mercantile Marine and its successor, the present Merchant Navy. 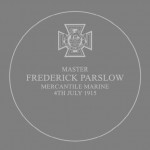 Commemorative paving stones honouring the recipients of all 628 VCs are part of a government scheme to mark the centenary of the First World War.

The unveiling ceremony takes place at 11am on Saturday 4th July 2015 on Islington Green over which will be flown the Red Ensign, the flag of Britain’s Mercantile Marine and Merchant Navy.