To mark its 30th anniversary later this year, the museum of motoring and aircraft at Brooklands in southwest London is getting a 10-part TV series. 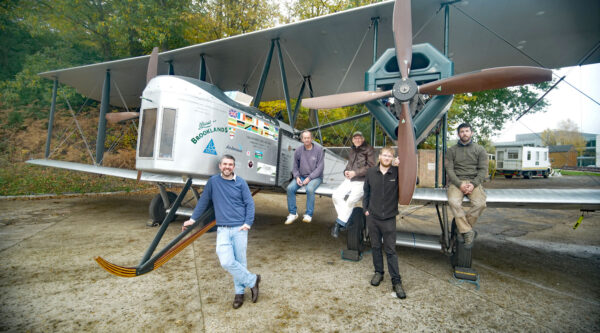 Vimy with the gang

Narrated by Sanjeev Bhaskar, Secrets of the Transport Museum follows staff and volunteers who maintain the collection and preserve the site’s legacies, as both a museum, but also the first-ever purpose-built racing circuit that went on to host the early land-speed record attempts.

In addition to the motoring history, Brooklands Museum is also now home to a collection of aircraft spanning over 100 years of aeronautical innovation.

The TV series will cover a myriad of historic racing cars, vintage London buses, Edwardian planes and even Concorde.

At a time when motor racing was almost exclusively a male sport, we are introduced to the infamous Belles of Brooklands; a group of pioneering women who raced on level terms with men in the 1920s. The V12 Delage was once the car of choice of Kay Petre, and now the car has returned 100 years later, to be driven by a modern-day racing driver, Abbie Eaton.

The new series airs at 8pm on Tuesday 30th March on Yesterday channel and will also be available on catch-up on UKTV Play.

It fills the slot vacated by Tim Dunn’s Architecture the Railways Built series, which returns for a 3rd series later this year.