Welcome to York Place, for that’s its modern name, yet it used to be curiously called Of Alley, and why it was so called is just as curious as the name itself.

This area to the east of Charing Cross is today a warren of streets mixing the modern bustle of London with the Georgian grand houses now filled with offices — but it spent most of its human history occupied by posh palaces.

The Bishop of London, Richard of Ely first took up occupancy of the land towards the end of the 12th century, paying a rent of 2 pounds of wax to Westminster Abbey. In around 1230, it was sold to Walter de Gray, Archbishop of York, from whence the area gained its name as York Place. Although sold several times afterwards it never dropped its name.

Eventually, Cardinal Thomas Wolsey came to occupy the site, and spent lavishly on entertaining the King and doing up his London home.

When the then Archbishop Wolsey fell out of favour with the King, and offered up his many homes to regain favour, the King was said to be very keen on York Place. Unfortunately, Wolsey only occupied it, he didn’t own it, but Kings are rarely bothered by such things, so the see of York lost its land in London, and the King gained another palace.

The King sold it to the Duke of Suffolk and in 1624 the estate came into the possession of George Villiers, The Duke of Buckingham.

It’s the Ducal legacy that we see in all the street names around this part of London.

George Villiers was murdered just 4 years later, and his wife stayed on until she lost it in the English Civil War. Her son regained it after marrying a rich heiresses, but promptly lost all her money and was forced to sell the estate to pay his debts.

It was the sale of the estate that was to lead to the alley and its curious name.

One of the conditions of the sale, to our old friend the property developer Nicholas (If Christ had not died for thee thou hadst been damned) Barbon was that each new street had to include the name of the Duke of Buckingham in some form.

So we had Buckingham Street; Villiers Street; Duke Street and George Street, and as the contract was explicit — we had Of Alley. 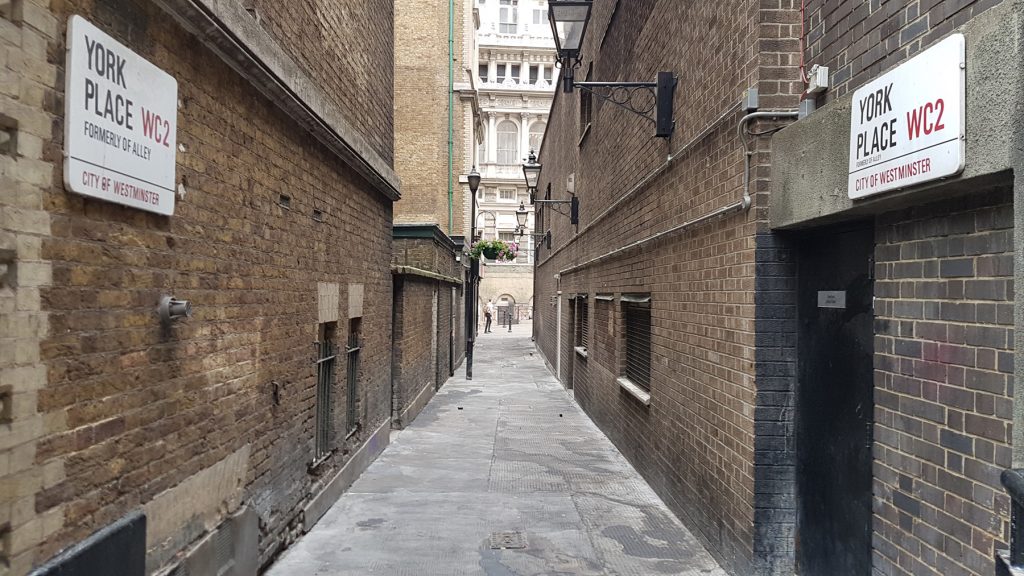 The name Of Alley seemed to remain in use until around 1855, when York Place, which already existed next to Of Alley swallowed up its neighbouring alley. However, the name lingers on, as the signs, note that this is York Place (formerly Of Alley). The original York Place is now lost, underneath a modern office block.

As an alley, it’s not going to win many prizes for appeal, being a narrow slice through the back of the shops, but does offer a useful route if trying to escape the slow-moving crowds at the top of Villiers Street. 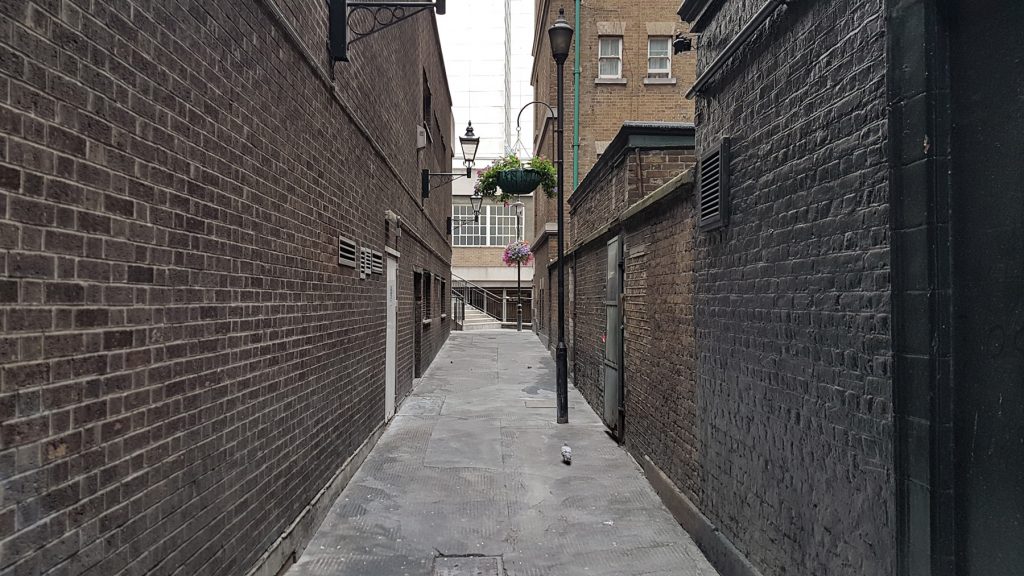 But, if in the area, it’s worth pointing out to friends and show off your incredible knowledge of London by showing them Of Alley, and tell them how it’s named after the Duke OF Buckingham.