Running, not inappropriately, from Nicholas Lane, can be found this rather short little alleyway that takes you between a single block of offices over to Abchurch Lane. 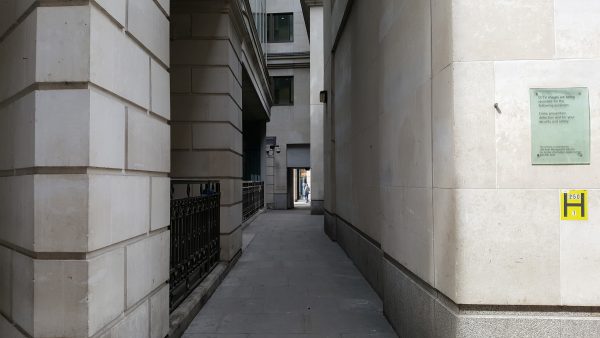 The alley, and the lane are both named after the church of St Nicholas Acon, which used to stand on the northern side of the alley. A church can be dated on the site to at least the time of the Norman Conquest, if not even earlier, but it burnt down in the Great Fire of London.

If you look just to the north of the alley, on Nicholas lane, there’s a City of London blue plaque to mark the site of the lost church.

The Acon suffix to the church’s name is thought to be in honour of Haakon, a Danish benefactor of the church in its early days.

The Acon was later adapted for the name of the Acorn pub in the alley It would also seem that in the past, the alley was wider than it is today, if this photo is to be interpreted correctly.

There are also suggestions that the alley has at times been called Boot Alley, although no one seems to know why.

The site of the churchyard remained open until the 1960s, when it was cleared for development, and some Saxon era remains found. 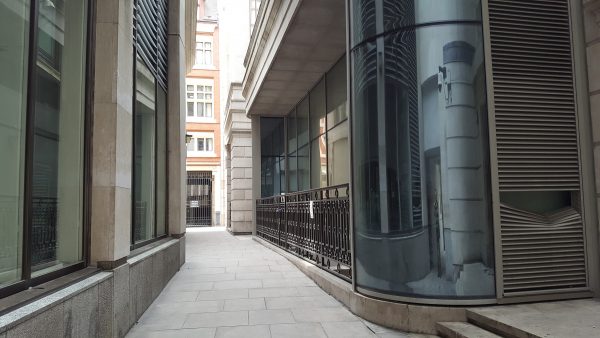 Today, it is somewhat squashed in between two tall office blocks and has almost no redeeming features whatsoever. The bronze railings are a nice touch, but that’s about all.

Which is a bit of a pity for a site that is actually steeped in history.