This yard is New, and looks it, but also on the site of an old, but at the time never so called, Bell Yard.

Today there are (at least) two Bell Yards in London, so this one got prefixed with New to separate it from the Bell Yard at Fleet Street. And very new it is, as it’s surrounded by a large hotel that was built on the site. 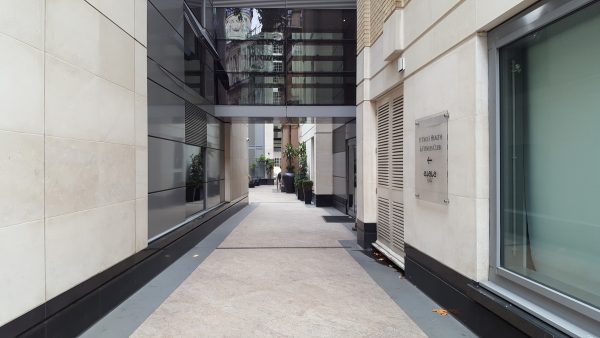 As with many City of London alleys, when the new block was being planned, they insisted on retaining the ancient right of way, even if today it feels more like walking though the middle of the hotel.

A mini-yard in the centre supports the alley’s name, and on my visit was largely filled with people in bathrobes relaxing from their morning luxury lifestyle.

The hotel however also sits on a site of considerable historical interest.

This is the site of the famous Faraday Building — a massive fortified citadel that was constructed as a telephone exchange and designed to survive a direct hit from a WW2 bomb.

It had 6-foot-thick walls, a 7-foot-thick ceiling and no windows, and was the main international telephone exchange during the war.

Construction of the Citadel took just seven months, and it opened in December 1940. To support its services during an attack, it came with its own power generator, dormitories for staff, and its own artesian well for fresh water.

Despite this being a critical site of government communications, Bell Yard was still retained, and the fortified basements on either side were not allowed to cut under the yard itself.

The construction of the Faraday Buildings however also obscured the riverside view of St Paul’s Cathedral and directly led to the legislation protecting the views of St Paul’s that has lead to some odd building shapes ever since, and the famous hole in a hedge in Richmond.

The Citadel was largely redundant several decades ago, but the immensity of the task to demolish such a strongly built site meant that it took until 2004 for anyone to attempt, and eventually turn it into a hotel. 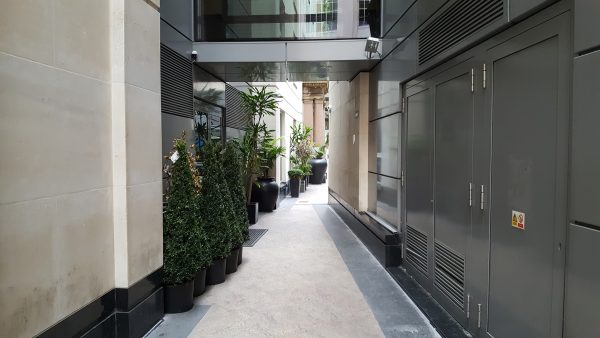 The yard itself dates back to medieval times, even if today it is shockingly modern in appearance.