A ancient winding path down a slope lined with cobbles in the City with a “famous wren church” in the middle, what’s not to love about Lovat Lane? 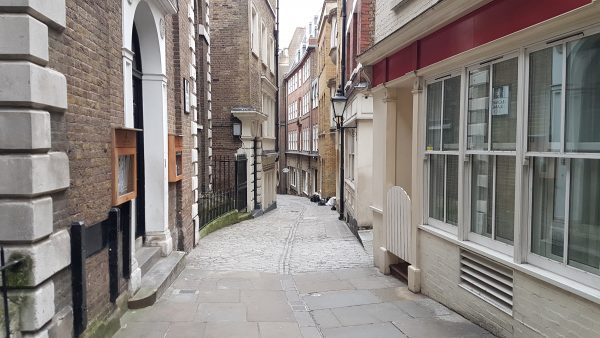 In fact, it used to be Love Lane, but the name changed slightly in 1939 to avoid confusion with another Love Lane just behind the City of London’s Guildhall. The choice of Lovat was not just a slight of linguistics, but also a nod to Lord Lovat, whose fisheries used to supply Billingsgate Market at the foot of the lane. 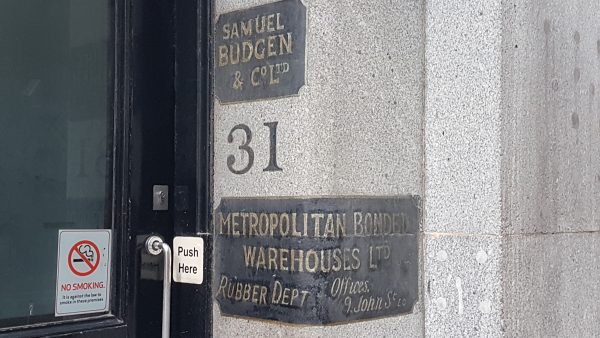 An Italian restaurant in the lane, Salotto 31 has recently added a plaque depicting the Lion of Saint Mark by its door, which is appropriate as the owners are Venetian, and the Lion is associated with Venice. A grand red flag for Venice flutters overhead and is absolutely not at all a way of drawing your attention to the restaurant. 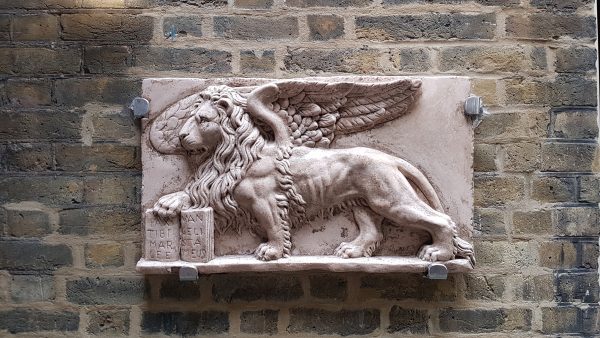 There is a sign at the top of the lane to mark “a famous wren church, and indeed, St Mary-at-Hill is a famous Wren church, although it shouldn’t be.

There’s been a church on this slope since at least 1177, when it served the local Billingsgate Quay. Destroyed by the Great Fire, although the rebuild was designed by Sir Christopher Wren, the works were actually carried out by Robert Hooke, and it’s really his church, not Wren’s.

The narrow frontage onto Lovat Lane conceals a Tardis-like interior which is much larger and, austere than might otherwise be expected. The church is open Mon-Thur 10am-4pm. I was walking past on a Saturday. The doors were locked.

While the lane is paved with cobbles*, which with the narrow aspect and winding nature give it a delightfully old fashioned appeal, most of the buildings lining the lane are modern. And most of them, are quirky enough to be quite delightful. Lots of brick and stone, and very little boring sheets of large plain glass. 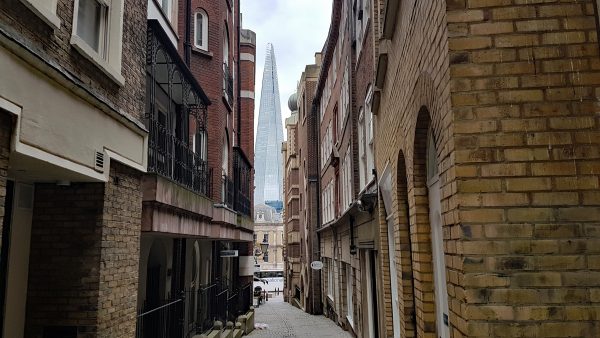 The deceptively large pub at the bottom, The Walrus and The Carpenter takes its name from a poem by Lewis Carroll. The verse is recited by Tweedledum and Tweedledee in ‘Through The Looking Glass’. 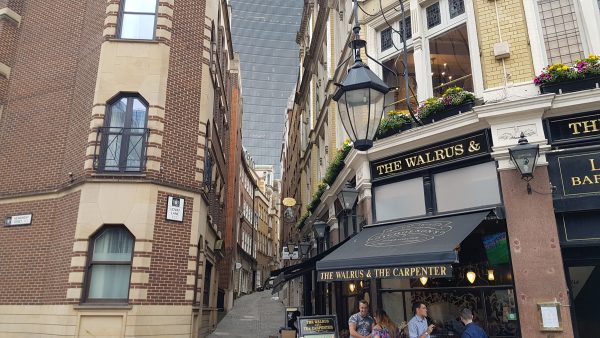 There is a hidden in plain sight thing to look for — the building at the bottom has a weather vane on top, which is notable, and worth pointing out. It’s easier to see from further back, or up the stairs to the pedway near by.

The weather vane at the top represents a Bawley fishing boat, which were used to catch Whitebait in the Thames until 1950. It was added in memory of Gordon V Young, who died in 1976 having worked in the family business at Billingsgate Market which used to be on the other side of the road. 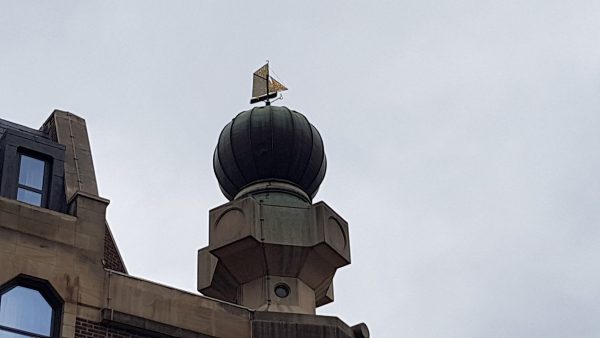 *Yes, I know the cobbles are technically setts, but everyone calls them cobbles. Get over it.