This modest and in its own way pleasant little back alley is notable not just for its curious name, but for being associated with the infamous Demon Barber, Sweeney Todd.

Or so they say. 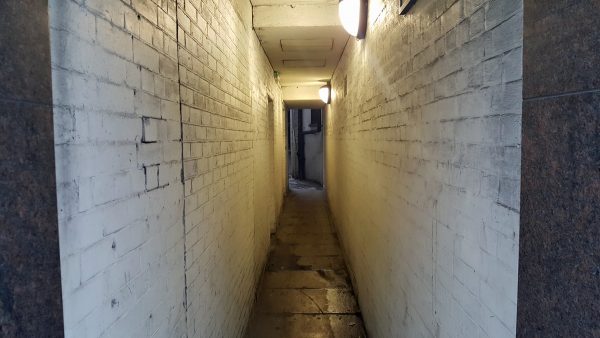 It is claimed, that the building next to the Court, which is now a former newspaper printers, was once home to the notorious Sweeney Todd. If he ever existed that is.

For over two centuries people have been repelled and excited in equal measure by the exploits of the Demon Barber of Fleet Street; a mass murderer who slit the throats of his clientele as they relaxed in the barber’s chair. Their corpses were then served up by his lover in apparently highly regarded meat pies.

Allegedly over 150 people met their demise in his chair.

That’s if he ever existed.

The papers of the time, who make today’s tabloid newspapers seem quite tame, all leapt on the story when it emerged, with a man certainly being hanged for murder in that location.

There was also pretty certainly a Sweeny Todd, born in 1756 in a Stepney slum, who was jailed for five years at one time, and later hanged for one murder, of Francis Thornhill.

Whether the rest of the tale is true, or a merger of a number of other fanciful tales by the “penny dreadfuls” of the time, is probably something that’ll never be solved.

But back to the alley, which is a short covered narrow passage, but turns a slight corner into a large municipal space, with high office windows and glazed tiles overlooking the space.

At the far end, a solitary wooden door leads to the vestry house for St Dunstan’s Church, and to one side, the exterior leaded windows add a delightful charm to the otherwise fairly bland courtyard. 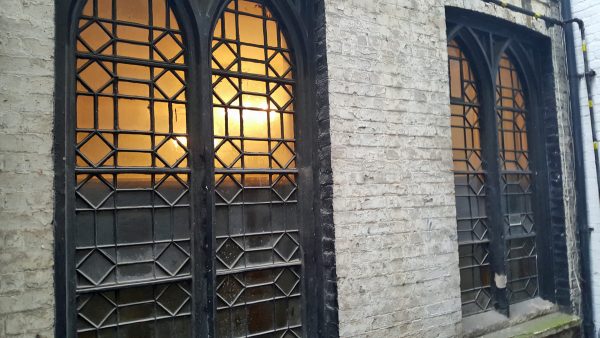 The history of the court is a curiosity. The layout fits with that which was normal for medieval plots, which are usually deep and narrow with little street frontage. 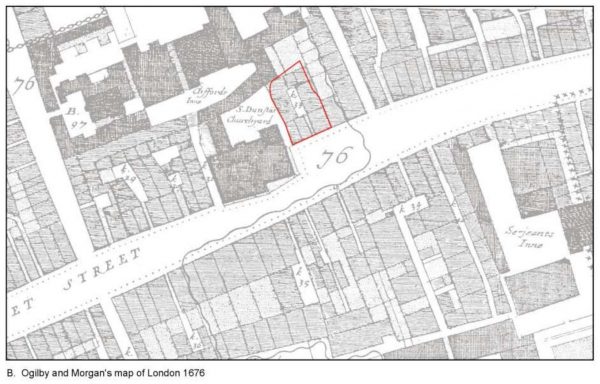 John Strype’s Survey if 1598 said it was “a small Place of two Houses, which bears the Name of Hen and Chicken Court.”

The name has been suggested to be after a pub on the site, although no such pub appears to have existed at the time, unless it was a fond nickname for a local pub.

The name, odd as it seems, is not unique, and there are plenty of other Hen and Chicken courts around the UK. Although which came first is still up for debate. 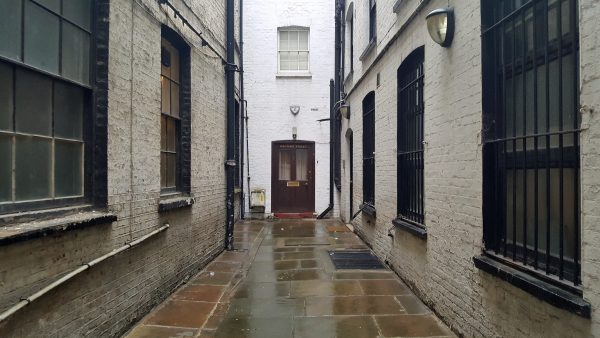 The alley might also get a revamp, as the City of London is looking at street improvements, and the alley is one that has been identified in a review by Burns + Nice for some modest decorative upgrades.

The main area of the court is not visible from the Fleet Street entrance and additional lighting projection at the court end of the covered entrance illuminating additional signage into the court would improve the entrance.

The back of the St Dunstan in the West Church building should be improved in partnership with the church. This would significantly improve the court and the initial view of it on arrival.