This is a former road in Clerkenwell now split into a road and a pedestrianised footpath, linked by a covered walkway to St John’s Street, and the site of the former Red Bull Theatre.

The Red Bull Theatre was an inn-yard conversion operating in the 17th century. For more than four decades, it entertained audiences drawn primarily from the City and its suburbs, developing a reputation over the years for rowdiness. After Parliament closed the theatres in 1642, it continued to host illegal performances intermittently, and when the theatres reopened after the Restoration, it became a legitimate venue again.

There is a myth that it burned down in the Great Fire of London, but that’s not possible, and the reason for its closure is unknown. It’s claimed that the modern covered walkway that links Hayward’s Place with St John’s Street is aligned with the original entrance of the theatre. 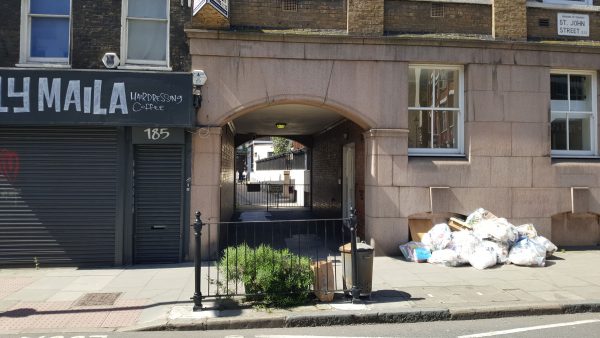 The whole area was rebuilt though from the 1820’s onwards, and the modern street layout was established then.

Hayward’s Place was laid out originally as Suffolk Street, taking in parts of two existing thoroughfares: Woodbridge Street, formerly Red Bull Yard and School House Lane. Later renamed as Hayward’s Place, as that harks back to the theatre, as the dramatist Thomas Hayward was a writer based there, although in this case, it is also suggested that it was renamed after the developer, not the writer. 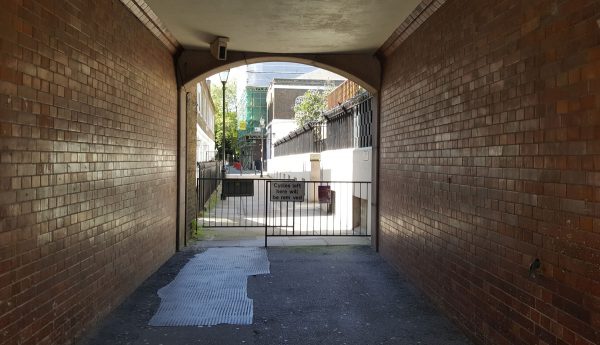 English Heritage assert that: “Given the character of the district generally nearly all the new houses were of the third rate. Fourth rate cottages were allowed in Hayward’s Place considered the least desirable part of the estate”.

The other half of the row was designed as warehousing and factories.

Although the residential side of Hayward’s Place was laid out with cottages on both sides, the northern side was soon demolished to accommodate an expanding Nicholson’s brewery, and the remaining cottages became workers accommodation. 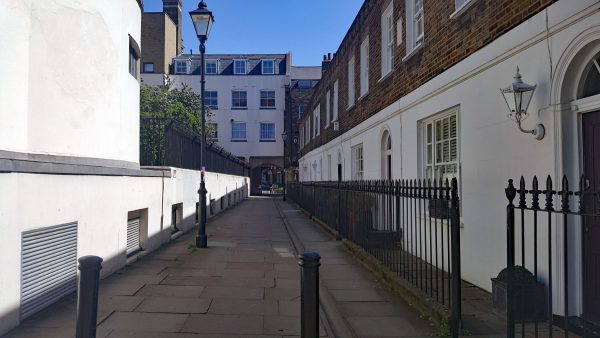 More modern buildings on the warehousing side Hayward’s Place date to post-war rebuilding as the area was damaged by bombs.

Today, those “least desirable” cottages are a rare survivor in this part of London and are highly desirable.