At just under a mile in length, this is the longest alley in London, and predates the area which is today known as the Harringay Ladder due to the way the street layout looks like a ladder.

A ladder only if you squint, and if anyone tried to sell you such a wonky ladder, go to another ironmonger.

Back to the alley, which appears on maps as early as 1872, when the whole area was fields, and even by 1914, when most of the Victorian era houses that make up the area had been built, there were still patches of farm, waiting for housing to be added.

So why is there an old footpath here, and why was it kept when nice clean roads were built in the area which would have served just as well?

To find out what is going on, we have to go underground. For this long alley is in fact the top of an old sewer network.

In 1868, the Hornsey Local Board of Heath commissioned a number of engineers to submit plans to improve sewage disposal in the area.

Baldwin Latham was one who did so, and his plan was adopted by the Board. 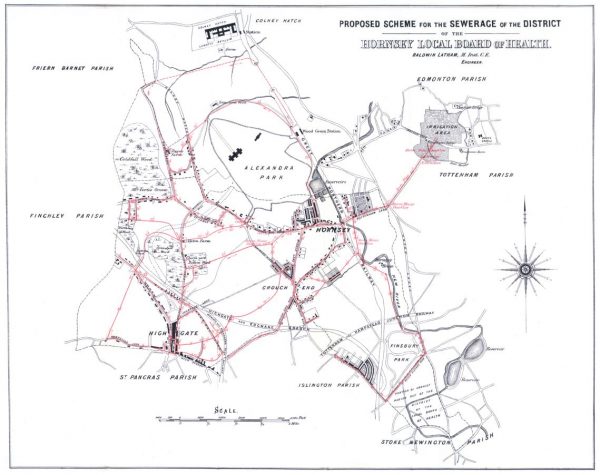 Although what was later to become the Harringay Passage was just one small part of a much large plan, its impact on the landscape, in creating this lengthy alley means it’s probably the most famously visible part of his works.

Later, when the Hornsey Outfall Sewer was built, the area around it was developed into two separate estates, both of which were unable to build directly over the top of the sewer – nor the New River which also runs through part of the estates.

Paving the first part of the passage started in 1887-8. The second section was paved in 1889-90. Unfortunately, all those extra houses put a strain on the sewer, which needed upgrading in the early 1900s to cope with so many humans ablutions. 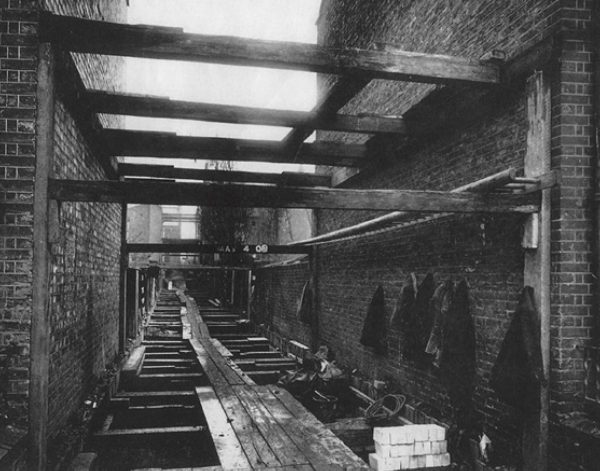 Today the Harringay Passage is still there, ever so slightly shorter than it once was, but in many places still showing the heritage of its creation in the 1880s.

The passage used to start just at the back of the Harringay Park Green Lanes Goods Depot, which is today a park, but that final length into the park is today sealed off. So we start at the bottom, at Umfreville Road and work our way upwards to Turnpike Lane. 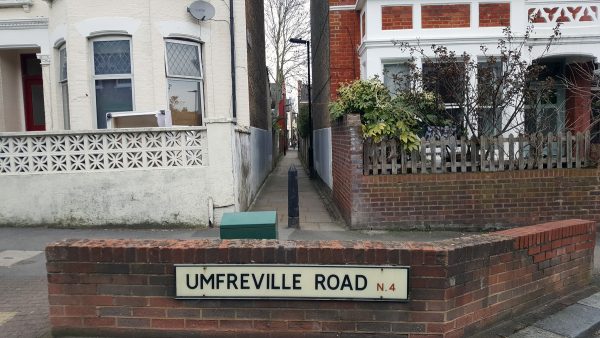 Each section of the alley is quite short, being precisely two houses (and back gardens) deep. This gives the alley segments a curious mix of architecture as while, generally, you enter and leave via the Victorian and Edwardian brick houses looming high overhead, it’s the back gardens that create the differences. 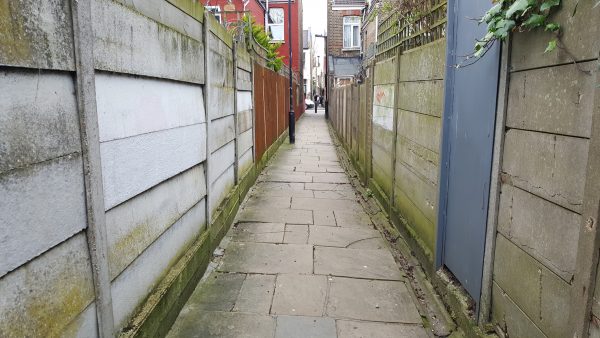 A pointy bollard marks the boundaries for most of the sections, and each of the roads has been narrowed at the point where the alley crosses it. Sometimes these are bland crossings, with bollards to control road vehicles and nothing much else, other areas have plants and trees.

The very first segment, all the way down at the bottom had the neighbour out trimming the tree to keep it looking nice from his front window.

A few delights break up the suburban landscape, such as the large school that sits astride the alley, with verdant planted hedges and still the old stone gates on each side for boys only. 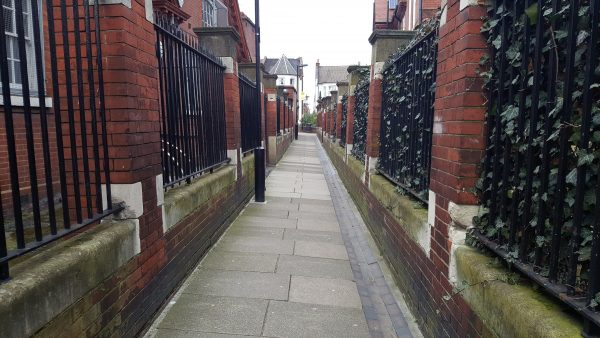 Down the southern end, the demographic of people using the alley is all young families and dogs being walked. It’s clearly families residential and well to do.

One of the breaks, at Beresford Road has an old Queen Victoria postbox, but most interestingly, for those who find such things interesting is the post box a few streets further north, on Falkland Road. This is a rare “anonymous box”, made in 1879. 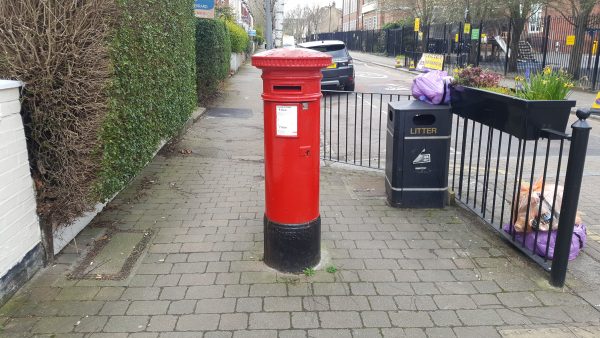 While quite clearly a postbox, the Derby foundry that made them missed off the Royal Cypher, and the words Post Box from the front. They were made for 13 years before it was decided that they needed both put back, and this one here in Haringey is a rare survivor.

One peculiar patch of the Harringay Passage suddenly widens into a fairly bland wide passageway. Quite why this gap appears here I have been unable to ascertain, but it seems to be original from the housing developments, as it shows up on a map from 1896. 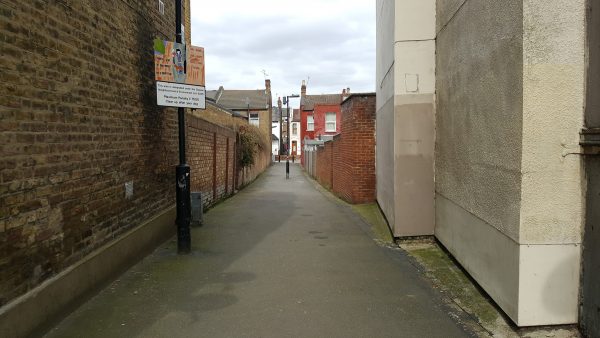 Something else that’s original, at least mostly at the southern end are the York stone paving slabs. Sadly as you move northwards they are occasionally replaced with modern paving slabs, then eventually all attempt at quality is abandoned and plain asphalt is laid down.

Dotted along the Haringey Passage though are stink pipes — the tall Victorian pipes that were used to let sewer gases escape before they built up to dangerous levels. 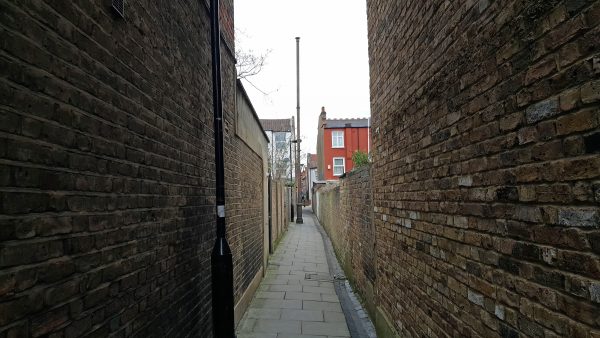 There’s also a couple of rarer stink pipes in the form of rectangular pipes attached to the walls of the houses lining the alley. 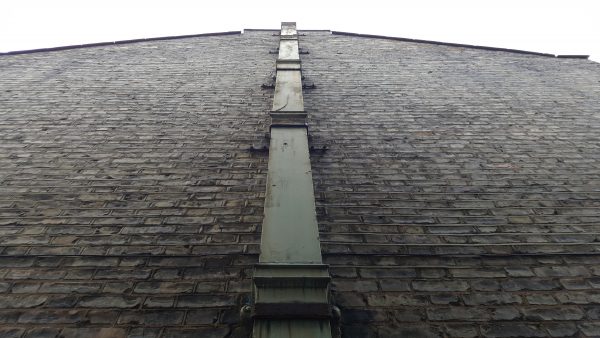 Also look for the many manhole covers the run the alley, giving modern workman access to the Victorian marvel beneath our feet, and where the older covers are, you can still hear the rushing sound of water beneath your feet. 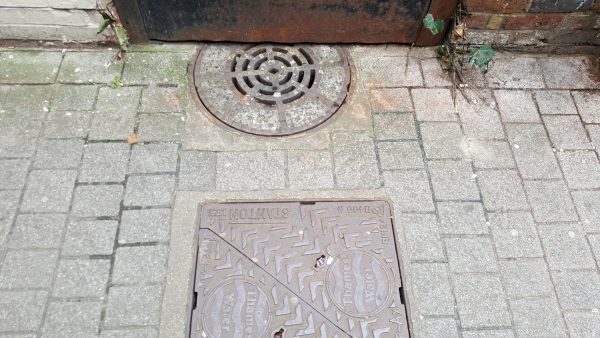 We’re reaching the end now, and the alley is getting busier. The families walking dogs have been replaced with locals going shopping. The buildings on either side of the alley also tend towards being a bit more shabby as you head northwards.

Something else that changes is the name, it used to be Haringey Passage but is today Harringay Passage. In 1965 the newly-formed London Borough of Haringey was created following the reorganisation of local government in London. The name ‘Haringey’ for the new borough was chosen in 1964, and revived the oldest known variant of the name ‘Haringey’. It is recalled by locals at this time that ‘Haringey Passage’ was cited as one such visible evidence of the oldest form of the spelling of  ‘Haringey’ still in use.

Eventually though, the “Haringey Passage” ends very differently to how it began, in pigeon shit and ventilation systems for chicken shops and kebabs.

As a walk, it’s one that passes through an area of pretty identical housing, and yet, within that identikit environment there are so many subtle differences as you walk that it’s filled with interest and delights.

Not bad for the legacy of a buried sewer pipe. 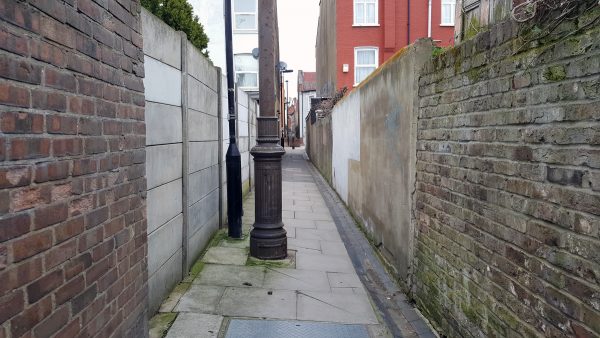 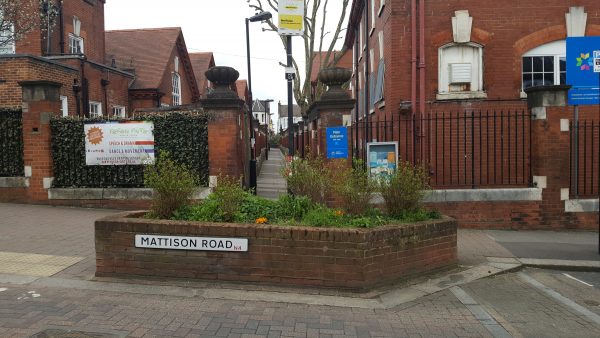 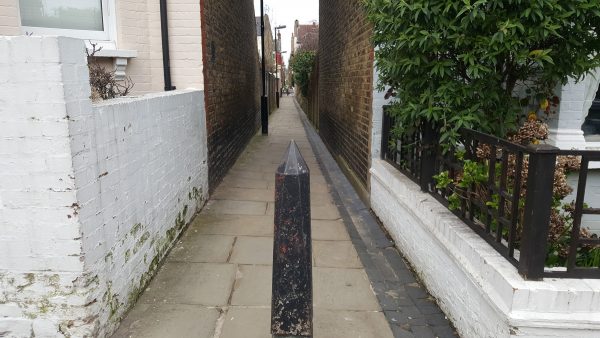 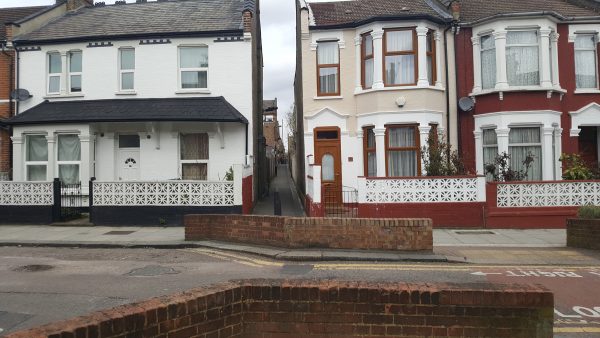 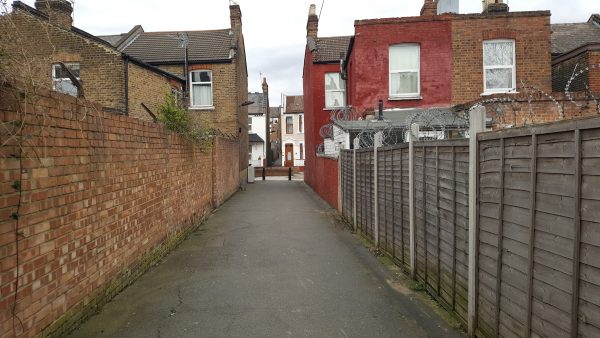 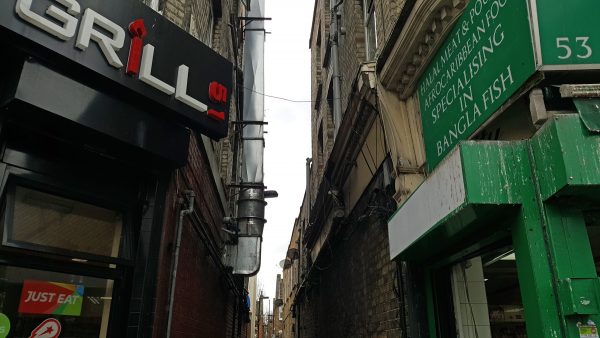 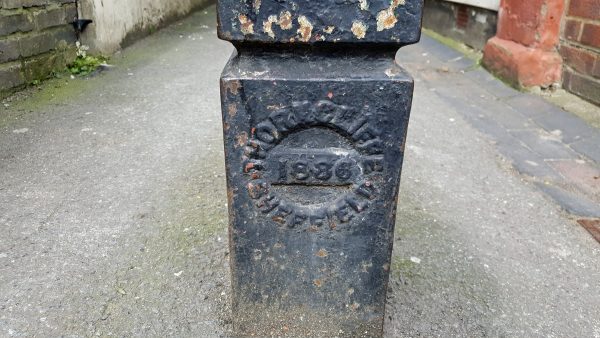 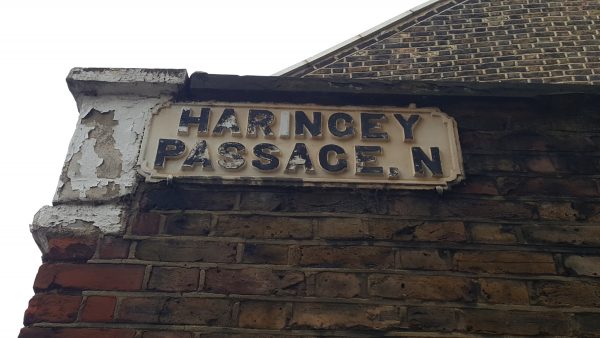 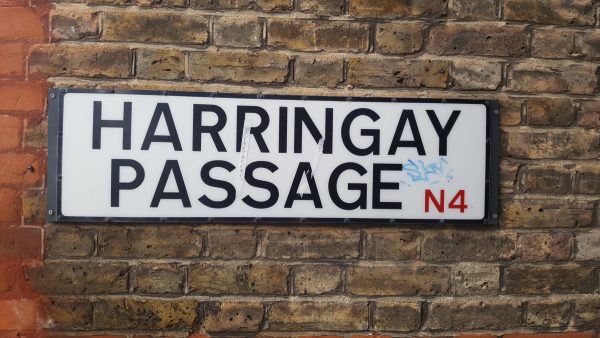