Hidden behind the tall offices that run along Liverpool Street Station can be found a surprising hidden walkway.

It’s not a surprise to the many people who use it to get to their offices, but it’s not entirely obvious unless you just happen know it exists, and are curious enough to investigate. 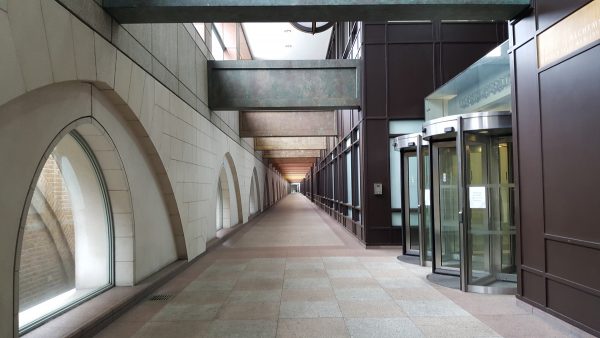 Named the Great Eastern Walkway, after the railway company that built the train station, this wide rather posh “alley” runs for 900 feet behind the offices that face onto Bishopsgate.

Finding it is both very easy if you know where it is, and remarkably difficult unless you happen to be looking in the right place.

The easiest way is to head to the entrance to Liverpool Street Station at Bishopsgate, and then go around the back of the entrance, towards the clock tower, and there on your right are a set of escalators leading up to the walkway.

A very narrow set of escalators, no passing anyone who stands. 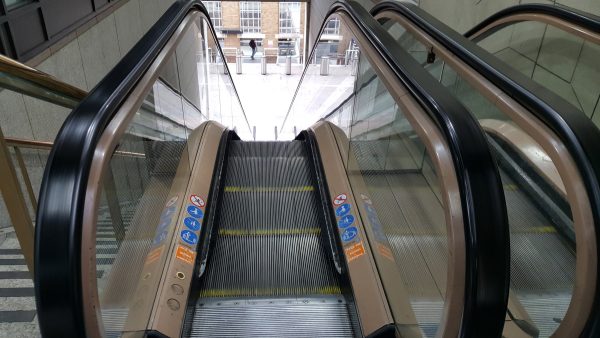 Up several floors to the walkway which at weekends is utterly empty. Devoid of pedestrians other than the ubiquitous patrols by security guards, and the sight of bored receptionists in the offices that line the walkway.

As you walk through this 900 foot passageway, look upwards to see the graduated colours of the overhead beams. These run from metallic lead through to golden yellow and back to lead again.

For the artist, Lincoln Seligman this is an exploration on the theme of alchemy, that elusive dream of turning base metals to gold – a dream no doubt shared by many City traders. 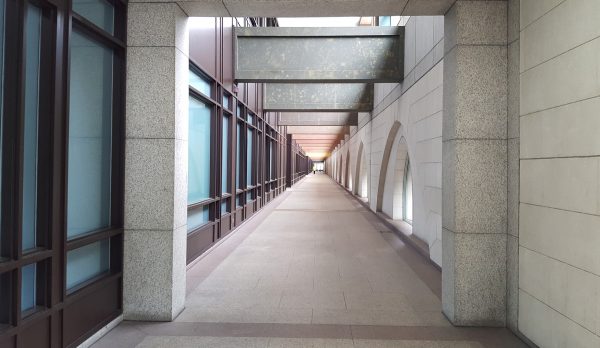 To the left are giant portholes, that if the glass in the train station was cleaned occasionally, would give a glorious view over the trains waiting to depart, but as it is are more of a shady hue.

There is a good vantage point at the end though, of the back of Liverpool Street Station, and a set of stairs down to the plaza. 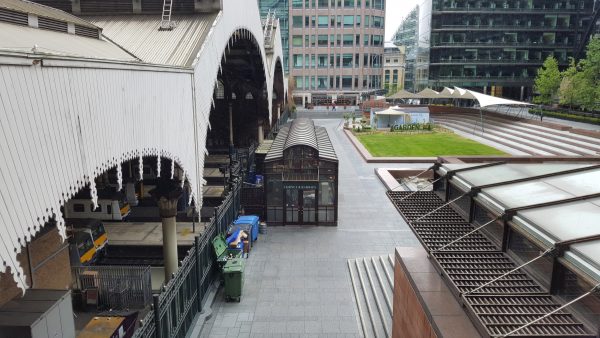 As an alley it doesn’t take you anywhere you cant’ get to just by walking along Bishopsgate itself, but was a delightful bypass to use, and a hidden secret to show off to friends.