Although called a street, this is in fact an alleyway, or at least, enough of it is to qualify. 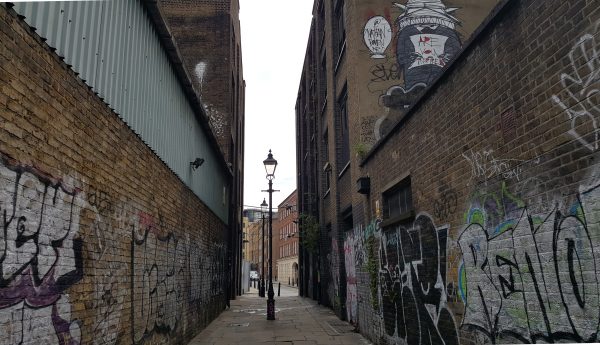 The rather grandly named Fleur de Lis Street is a relic of the time when this part of Spitalfields was filled with French émigrés, the Huguenots, who fled to this country following the St Bartholomew’s Day Massacre of 1572.

Like most of London once, this was all fields, up until around the 1720s, when the area started to be developed. The first record of the neighbouring streets can be found in May 1724, so it’s likely that Fleur de Lis Street was laid out at around the same time.

Always an alley, it may have once been called Shoreditch Alley, at least according to Rocque’s map of 1746. When it adopted its current name is not known. None of the original buildings from that time now survive, and what’s here is itself soon to be swept away in favour of tall towers. 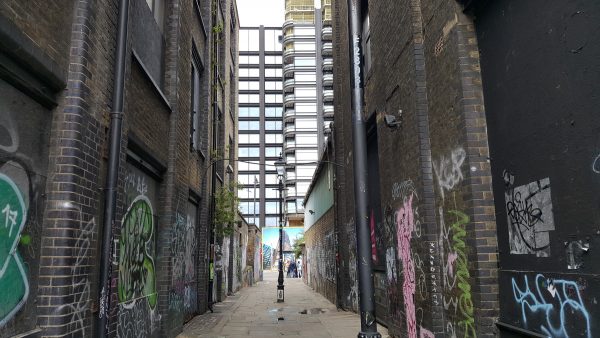 It’s unlikely that the new building owners will be as accommodating to the sign that you are in Shoreditch, the copious amount of street art/graffiti (delete depending on preferences), although I would prefer it if the painters would avoid painting over street names. 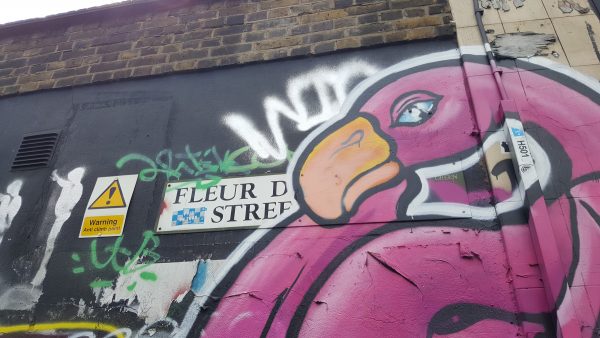 Although this alley is short, and decorated by modern hands, it has a certain charm to it, in the old style street lights, and the warehouse buildings that are evocative of a time when offices didn’t dominate the area.

The street also marks a hidden boundary though — it’s the border of the old parishes of St Leonard Shoreditch, Christ Church Spitalfields and the Liberty of Norton Folgate.