This short alley, and indeed most of the surrounding land lies within the late 13th-century Blackfriars friary, which in its time was one of the largest single sites within the old City of London. 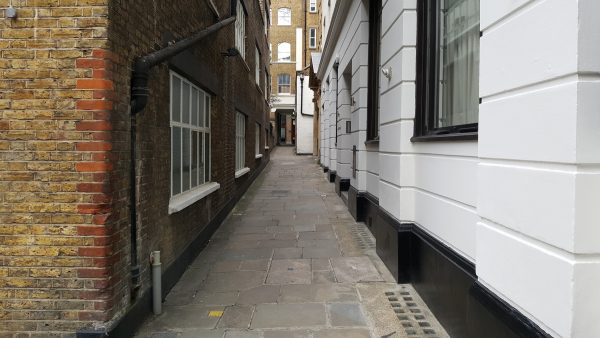 Within the friary was a massive church, and the alley, Church Entry, probably marks the line of the space separating the nave from the choir within the church. Following the dissolution of the monasteries by King Henry VIII, Blackfriars passed into the hands of, among others, Sir Thomas Cawarden, Master of the Revels who was responsible for overseeing royal festivities.

Cawarden converted the nave of the church into a mansion and parts of the nave were converted into open spaces with the bulk of the new house formed from stretches of the former aisle. This seems to be the point where the open space that is today Church Entry alleyway came into existence, as a separation between the two buildings made out of the former church. 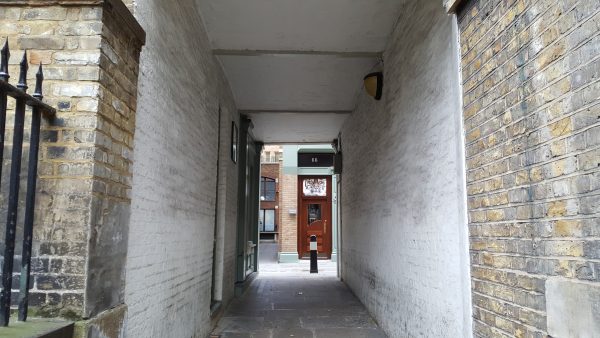 Over the subsequent years, the land was sold off piecemeal, and by 1873, the alley was clearly defined, and the northern end was covered over, as it remains today. It also appears that the buildings at the northern end were a tobacco factory owned by s Thomas Brankston & Co.

By 1923, most of the old buildings along the alley were demolished, and the current layout was fixed.

The northern end is probably more interesting, thanks to the covered section, but one delight to find here is what looks like an old church, St Ann’s Vestry Hall. In fact, it’s relatively modern, being built in 1923. 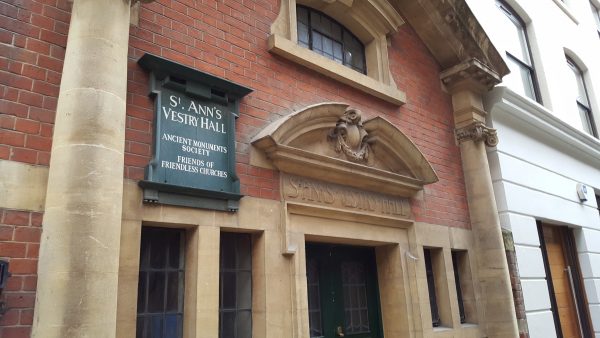 The Edwardian Baroque facade sits curiously within this space, but I quite like that this vestry building on the site of an old monastery is today home to the Friends of Friendless Churches, which campaigns for and rescues redundant historic churches threatened by demolition and decay.