London Underground has confirmed the the long-expected award of a signalling contract that will see the sub-surface lines getting a major overhaul.

As expected, the contract has gone to the French group, Thales after London Underground bought out the failed contract which had been awarded to Bombardier.

The new contract is more expensive, at £760 million, although that is mainly due to the expansion of the scale of the project, based in part on discoveries made when the contract had been awarded before.

The re-tendering of the contract and the expansion of its works also means that the completion date has been pushed back from the original main completion in 2018/9.

Fortunately, 2018 is also when Crossrail will dump a 10% capacity increase onto the central part of the Underground network, so the delay may not be as devastating as first seems.

Work is expected to begin later this year and the main benefits will be delivered by 2022, when the frequency of trains running during peak periods will increase to 32 trains per hour in central London – a train every two minutes – with frequency increases at other times as well.

In advance of that, TfL will completes the introduction of the new air conditioned trains on the entire sub-surface network by 2016. Further benefits will include a train control system which will increase capacity further starting with the Circle line in 2021, with additional frequent services at peak times. During 2023 the final improvements will be delivered, with a further boost to peak and off-peak frequency on the Metropolitan line.

Some of the current signalling system belongs in a museum, having been operating safely, but in a very basic way, since the early years of the last century.

Here is an image from a public display in 2010, which looks to be from Edgware Road signalling box. 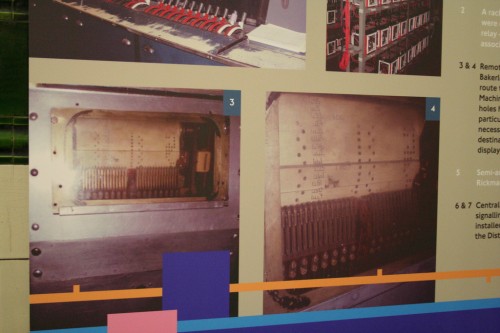 Yes, they really do use a plastic sheet with holes in it to control the signalling. Your train home was being controlled by a glorified Fisher Price record player.

The current system, unsurprisingly is not capable of running trains close enough together to meet capacity demands. Once completed though, there will be trains every 2 minutes across much of this part of the network in Central London.

That will also require the related purchase of 191 additional trains.

The total cost of the upgrade will come to around £5.5 billion, which includes longer platforms and changes at depots to cope with the additional trains. 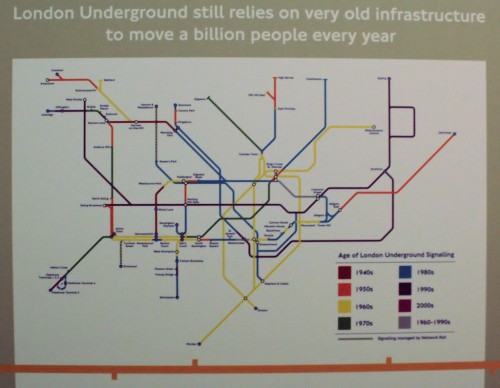 A signalling age map from a public display in 2010

The Circle, District, Metropolitan and Hammersmith & City lines together make up nearly 40 per cent of the network and include the oldest part of the network built in 1863. Between them the four lines carry around 1.3 million passengers a day.