Being nice can be lucrative, if you’re London Underground and you join in the World Cup fervor by renaming a tube station for a few days.

Southgate tube station was rebranded as Gareth Southgate station from a couple of weeks ago for 48 hours, after the squad finished fourth in the football World Cup.

Not obvious from the various photos issued by TfL, was that only a few of the platform signs had been rebranded, and that there was a “sponsored by Visa” sign above the roundels.

And that sponsorship earned London Underground around £80,000, according to the Evening Standard.

There was also the attendant increase in people visiting the station to pose and take selfies, which will have put some extra ticket sales into TfL’s coffers.

Money aside, it was also, just plain fun. 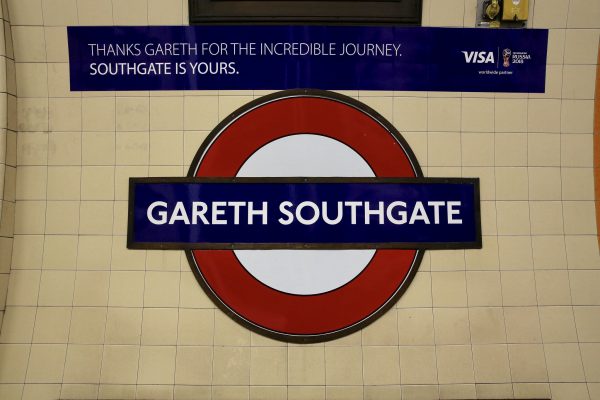 I am personally rather ambivalent about football, and my main awareness of the man for a while that some dude in football land was noted for his waistcoats.

However, even a football curmudgeon like myself smiled when I heard what happened at Southgate tube station. Even without the sponsorship, the cost would be been minimal to print up a few signs and splash out a press release.

And in doing so, lots of people smiled.

Not bad for a few hundred quid in signage.

And while people may worry about the creeping commercialisation of the tube, it’s pretty decent work to grab £80,000 of sponsorship in just a few days. TfL spotted an opportunity to do something fun, and make some money, and the sponsor responded swiftly to an opportunity to latch onto something that would make people smile.

But not everyone smiled.

Angela wrote demanding to know how much it cost. Who approved the spending, what the business case was, the job title of the person responsible for approving the spending on the sign.

But lots of people were happy. Even people who don’t care about football probably nodded in admiration of a bit of light fun.

Even without the sponsorship, spending a mere few hundreds on some signs is a minuscule amount for the number of smiles it raised.

But, there is a worry that with more Angela’s around, London Underground will look at every opportunity to do something cheap to raise a smile, and pause, worry, try to get more sponsorship first. Might decide that Angela will complain and maybe it’s just not worth the risk any more.

No more fun unless its cost effective.

No more smiles unless they’re sponsored by someone.

What a sorry world that would be.