London Stone to move to the Museum of London

The venerable London Stone, of historic and mysterious antiquity, totemic protector of the City, and current resident of a branch of WH Smiths is to be moved to the Museum of London.

Only temporarily though, as the building it sits in is to be demolished, and when a replacement is ready, the Stone will move back once more. The Museum of London has confirmed that it will put the Stone on display from 22nd April, following a survey of the Stone by archaeologists from MOLA.

So precious is the lump of rock, that it will be housed in a “bandit proof” case — just in case anyone wanted to steal it. And such things have to be taken seriously, for the Stone is claimed to have magical powers that protect the City from whatever it is that Stones can protect cities from.

“So long as the stone of Brutus is safe, so long shall London flourish,” says the proverb.

One of the plans for the Stone before it goes on display is to take a 3D scan of it, which apart from the intellectual benefits, means it would be possible to make mini-replicas of the Stone. Mini-talismans than can be sold as personal amulets of protection to be worn when perambulating this mighty metropolis.

But what is the Stone?

No one is really sure. It’ has a legendary status as great as the air of mystery that surrounds it.

As an identifiable object, it has been around since at least the early 12th century, when it was referred to as Londenstane in a document listing properties owned by Caterbury Cathedral. The current best theory is that it’s Clipsham limestone from Dorset, and possibly of late Roman origin. Some man-made carving of the stone exists, and it might have been near the doorway to a noted Roman villa that was in the area.

Whatever it’s origins, somehow the Stone become notable, and as such, protected. 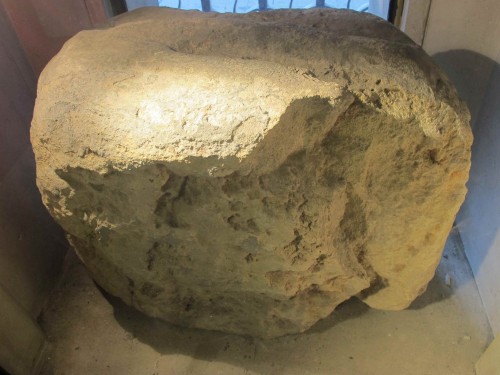 It’s said that when Jack Cade entered London ahead of a rebellion against King Henry VI, he symbolically struck the Stone with his sword to claim lordship of the City. Quite why he carried out this seemingly unprecedented act is unknown.

In the 17th century Christopher Wren saw foundations below it during the rebuilding of the area after the Great Fire and was convinced it was something more elaborate than a pillar.

In 1742 at a vestry held in May it was ordered that the Stone be removed and placed against the church of St Swithin’s at the churchwarden’s discretion. The Stone was moved again in 1798 when a small portion of the London Stone was incorporated in the south wall of the church.

St Swithin’s church was destroyed during WW2, and in 1961-62, the Stone moved to its current home in a rather curious iron grill box at the base of a nondescript office block.

Today, the ground floor is occupied by WH Smiths, a retailer of as many magazines as there are theories about the Stone’s origin and purpose.

In a way, the mystery about the Stone is what give it such significance. If it were shown to be just a random lump from a Roman building, then it would probably end up in a cardboard box in a Museum warehouse.

As it is, it’s a mysterious totem of London, and of considerable importance.

The removal of the Stone is expected to last around 20 months, after which it shall return to Cannon Street to go back on display once more, protecting London as always.