One of the periodic reports from TfL has been released with details of ongoing network upgrades across the networks it controls over the past few months. 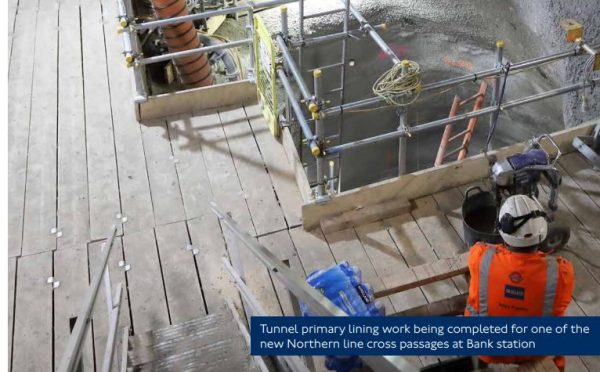 The station upgrade project is complete, has been handed over to operations and is therefore no longer reported.

They have completed excavation to the station base slab level and are now constructing the internal structure of the station.

Excavation to the base slab level is complete and work is under way to pour the station base slab and to install pre-cast station platforms.

TfL has finished pouring the concrete to cap the piling for the new basement and completed the tunnel works for the new Northern line platform.

They have also started works on the new cross passages and continue tunnelling on the new Northern line running and platform tunnels. Works to relocate the Central line high-voltage transformers also continue, with the new transformers delivered. The main high-voltage cables will be installed during two weekend closures.

The much delayed new Walbrook entrance to the Waterloo & City line is now marked to be open in “late 2018”. There have been a number of issues with the manufacture and installation of the fire doors, which have resulted in delays. The delivery of the integrated systems that monitor and control the new station assets has also been delayed.

TfL is installing cladding panels in the new tunnel linking the Bakerloo and Elizabeth lines, however there are issues with the supplier’s progress which are being managed by the main contractor to ensure contract dates are met

Design work for the new oversite development at the new northern entrance is being prepared for submission to the council.

For the construction works, TfL has purchased a property on Kentish Town Road and is negotiating the purchase of Hawley Infants School.

In March became the 73rd step-free station on the network with the introduction of two new lifts and manual boarding ramps.

Victoria, Whitechapel and South Kensington stations are all having works to reduce the gap between the platform and sub-surface trains, with Sloane Square and East Putney due to be worked on.

The upgrade should be completed with the final tunnels and lifts commissioned by the end of this year.

A comment indicates problems with water ingress at the station which is being worked on for the Elizabeth line. There is also a dispute with the contractor over the final cost of the project.

To deal with capacity issues, they are investing some options, including a new northern ticket hall, moving the western ticket hall lift and constructing a new entrance on Jupp Road.

The Sloane Street entrance is now being demolished, ahead of works to add new entrances on Knightsbridge and Hooper’s Court.

Works to nonpublic areas are under way following the relocation of staff facilities into temporary accommodation, and are due for completion in October 2018.

As part of an upgrade to add capacity and provide stepfree access, the southbound staircase has reopened to customers. This follows a period of closure during which the stairs were demolished and a new staircase installed.

Demolition work continues on the platforms to prepare for the new lifts. The first phase – to provide step-free access to all platforms and to the College Road side of the station – will be completed in early 2020.

The lift tower steelwork is almost complete and cladding installation has begun. There have been some difficulties with the design, but the station is still scheduled to become step-free in October 2018.

The new control centre at Hammersmith went live on 6 May, bringing all aspects of service control for the four lines under one roof.

Upminster depot is being upgraded with a new wheel lathe shed. This will allow the new, longer trains to have all wheels maintained on the lathe where previously the depot could only maintain the wheels on part of the train before reversing it to work on the wheels of the remaining carriages

They have fitted Automatic Train Control (ATC) to 82 S-Stock trains, meeting the requirement for 53 trains to be ready to use once they start to commission the new signalling infrastructure in the first migration area.

The cancelled Watford extension of the Metropolitan line has vanished from the TfL website.

The new timetable, which came into effect in May extends a 30tph service in both peaks from the existing 60-90 minutes to at least 120 minutes (between West Hampstead and North Greenwich). These works include the timetabled use of the West Hampstead track reversing facility, train driver accommodation refurbishment at North Greenwich and essential upgrades to power supplies and cooling systems.

The service should be increased to 32tph by the end of 2021.

They continue major tunnel ventilation system upgrade works at Park Square Gardens and Hay’s Mews to reduce temperatures in tunnels on the Jubilee line between Baker Street and Green Park. This is due to be completed imminently.

The twentieth refurbished Jubilee line train out of 63 is back in service.

Work on a feasibility study into a heat extraction scheme at Forest Road vent shaft at the northern end of the Victoria line to reuse the heat for local homes is under way.

The existing 36 trains per hour service is on track to be extended to 3 hours in the peak periods from early next year.

The new Piccadilly line signalling control system continues to operate between Cockfosters and Earl’s Court. The last of the installation work on the Uxbridge branch is under way at South Harrow.

An ‘invitation to negotiate’ was issued to three bidders for the signalling and train control phase of the line upgrade. This is expected to result in an authority submission in late 2019 to allow upgrades of the Piccadilly line, ahead of the new trains arriving from 2023.

The York Road disused station is being studied for a possible heat extraction upgrade, with low grade heat then supplied to a nearby user

The pump house steelwork on Islington’s Bunhill scheme has been completed. When working, waste heat from the Northern line will be piped into nearby homes.

They have cast the concrete inverts on which the track in the two new running tunnels will be laid, and some initial sections of track have been installed. Three cross passages, each approximately 20-30 metres long, between the two running tunnels have also been completed, as a means of evacuation in an emergency.

The enclosure over the Kennington Green shaft, which protected nearby residents from noise, dust and light pollution from the tunnelling works has been removed, enabling construction of the new headhouse and subway.

On the Barking Riverside extension, work to relocate the ramp and two overhead line structures, and demolish the redundant Ripple Lane diesel depot building was completed during possessions over Easter 2018.

A delay caused by design complexities has been mitigated bringing the completion of the project back into the original timeframe.

A further response to consultations on the extension will be published this summer.

To extend their life, structural repairs to carriages have been carried out on 20 out of 36 trains with the full fleet completed by the middle of 2019.

One train has been taken out of service to be used as a test for a new CCTV and passenger information system upgrade.

The Vehicle Control Centre is being upgraded to simplify the signalling borders around the central section of the railway. This removes conflicts that can occur when trains move from one section to another.

On 11th June, a significant milestone was achieved when, for the first time, a Class 345 unit ran (at low speeds) through the tunnels from Pudding Mill Lane to Westbourne Park. This followed the installation of the overhead electrical lines in the Central Section and energisation of the section between Stepney Green and Westbourne Park on 22nd May.