One of the periodic reports from TfL has been released with details of ongoing network upgrades across the networks it controls over the past couple of months.

There have been some recent concerns raised on step-free access at Tottenham Court Road station due to the westbound Central line platform being unusually narrow. A special angled boarding ramp has been introduced to improve step-free access on that platform.

The much delayed new entrance to the Waterloo & City line is still on target for its revised opening in May.

Where they are creating a new entrance on Cannon Street and step-free access to the Northern line and DLR, they have finished pouring the concrete to cap the piling for the new basement.

They have also completed the tunnel works for the new Northern line platform. The running tunnel excavation to the north of the new platform continues on schedule. They are now constructing the four new station cross passages. 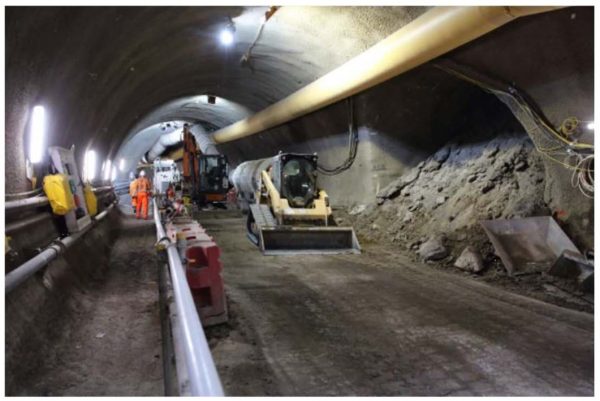 Two new escalators linking to the Elizabeth line have been constructed and are ready for testing and commissioning. Mechanical, electrical and piping works are ongoing as planned, and installation of vitreous enamel panelling is progressing

On 17 and 18 February, the biggest test of the new signalling system was completed, with more trains running between Hammersmith and Edgware Road than on any other weekend of testing.

The new control centre for all four lines at Hammersmith is also nearing completion.They have completed track layout changes in 23 out of 29 areas. TfL has 19 signal equipment rooms (SERs) ready for Thales to install the signalling equipment. There are 21 more in progress, and six yet to begin.

The SER at Triangle Sidings is in use. It comprises sites at High Street Kensington, Gloucester Road and Earl’s Court. All three were due in February 2018, but works were brought forward to provide dual supply before Christmas 2017.

A signalling contract for the Battersea extension has been signed with Thales, who have started detailed design.

Overall, the project is now more than 90 per cent complete.

Crossrail is continuing to manage the increased cost and schedule pressures and has developed a revised delivery schedule that prioritises delivery of systems (including communications, ventilation and platform screen doors) that are critical to the operational railway. It also incorporates later than planned dates from Bombardier – who are delivering the rolling stock and depot.

Driver training started on 5 March 2018, using the new C345 trains on the Great Western Main Line between Paddington and Maidenhead. Preparations are also underway for the start of testing of automatic train operation in the tunnels from 25 March 2018.

Driver CCTV installation testing is under way on the inner west route in advance of Stage 2 services in May 2018 between Paddington and Heathrow, and detailed design work has now been completed for the station upgrade programme due to be completed by December 2019.

A new footbridge and lifts have been installed at Manor Park, and works are continuing on the same at Seven Kings and Maryland. Platform canopies at Chadwell Heath, Goodmayes and Ilford are also being repaired and redecorated.

Farringdon and Tottenham Court Road are nearing physical completion; others, including Bond Street and Liverpool Street, have more work left to complete.

TfL is still on target to decide on the preferred bidder for the new tube trains that will progressively replace those on the Piccadilly and Bakerloo lines.