Permission has been given for the London Overground to be extended to a new housing development at Barking riverside.

The Barking Riverside development has been described as the largest brownfield development opportunity in Western Europe, with the potential for 10,800 new homes, housing around 27,000 people.

The importance of a transport upgrade of some sort is clear as at the moment the houses would be built in a total transport black-hole. Options for bus services or extending the DLR were looked at, and dropped, in favour of a short extension of the London Overground from its current terminus at Barking town centre.

The railway is in fact critical to the housing development, as its a condition that the railway be approved in order for the housing to be built.

The site, without the railway would be limited to 1,500 homes, but now that permission is granted, that unlocks permission to build an additional 9,300 homes. In case the railway is approved, but not built, there is a provision to limit the housing development to 4,000 homes, until the railway is open. 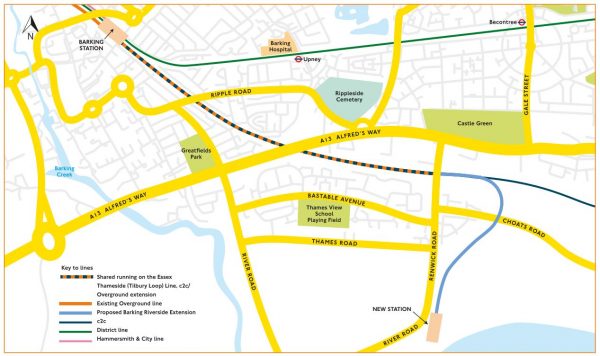 The extension is estimated to cost £229 million in 2016 prices with an outturn cost of £263 million including inflation assuming construction starts in the financial year 2017/8 and is completed in 2021.

Of this, £91 million is coming from TfL and £172 million from the housing developer.

It is in the Mayor’s own best interest to push ahead with the housing development, as the GLA owns 49% of the development, with the rest owned by London & Quadrant New Homes.

So in effect, TfL/GLA’s contribution actually covers around two-thirds of the cost of the railway, although the GLA can be expected to recoup its share of the housing development contribution from the sale of homes.

When operational, London Overground services would no longer terminate at platform 1 at Barking station but would be diverted to run through platforms 7 and 8 which are currently used by c2c and freight services.

From there, the new route would run along existing lines until just to the east of Barking Tilbury Line Junction at which the East Thameside lines diverge from the direct lines to Southend and Shoeburyness.

There would be a remodelling of the existing Ripple Lane freight sidings in order to create dedicated tracks for London Overground services to the north of those sidings and separate from the lines carrying c2c services.

From a point just to the east of Renwick Road, new twin track lines would rise on a grade-separated viaduct over the existing freight terminal and Choats Road before continuing on a viaduct to a new elevated station near to the waterfront within the proposed Barking Riverside development.

The track and signalling layout would make passive provision for a second station just to the west of Renwick Road. That could support the development on commercial land for an additional 5,000 -7,500 homes in what is called Castle Green. 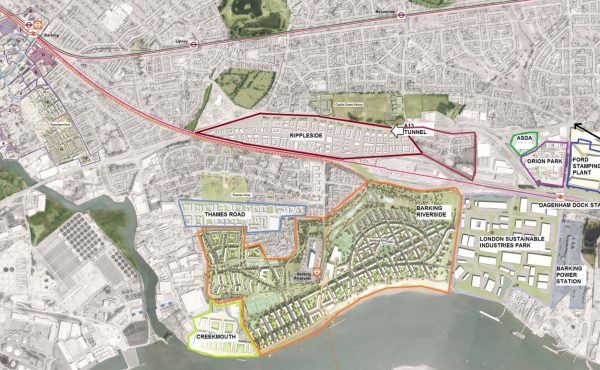 All the construction plans are based on the expectation that the London Overground will eventually upgrade the line to 5-car trains. At the moment it has 2-car diesel trains, to be replaced with 4-car electric trains next year, and potentially later expanded to 5-car units.

There is also an option to extend the line under the Thames to Thamesmead, but that would require the demolition of the viaduct they plan to build for the current extension. It seems that the viaduct is worth building today, because of the development benefits, but worth demolishing later if needed, mainly as any such tunnel wouldn’t happen until the 2030s at the earliest, if at all.

Another less noted benefit of the railway extension is that the sea cargo terminal DP World London Gateway plans to remodel the Ripple Lane sidings, next to the future Renwick Road station as part of the scheme, which will improve the ability to integrate freight services into the passenger timetable.

If everything proceeds as planned, expect new a new station to appear on the tube map around the middle of 2021. 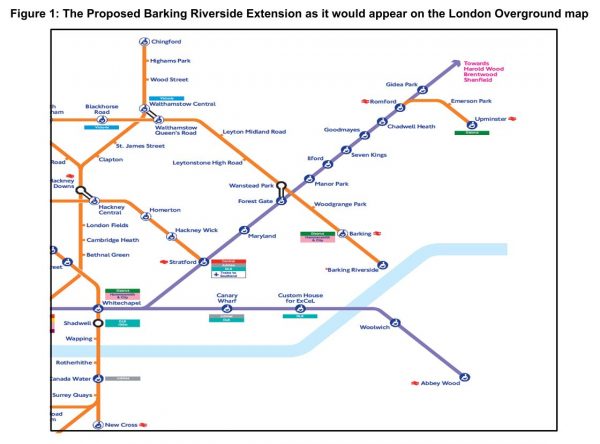