Published 27 November 2016 by Events and Tours

More accurately, a small old museum that closed has reopened in a new larger location, having moved from inside a police station into the space vacated by the Clockmakers a couple of years ago.

Policing in London is a relatively recent affair, as it was long seen as a bit too European heavy handed for the government to have a permanent police force, but residents were often drafted in as part timers.

The City of London for example was divided into wards from the 13th century, and everyone who lived there was expected to serve on the local patrols.

By the 17th century, there were 1,000 “charleys” on patrol, their nickname being after King Charles II who passed the law setting them up.

When the Metropolitan Police was formed in 1829 — by Sir Robert Peel (of Bobbies fame), the City of London refused to join in, and set up its own police force in 1839.

Ever since then, the City of London Police, while fully under the control of the Home Office, has been an enclave within the Metropolitan police’s realm.

So, while the Metropolitan Police don’t have a museum, the City of London police do, and now it’s larger, and somewhat easier to visit.

Based next to the Guildhall Library, they’ve cleverly divided the space into small rooms and a corridor to make it seem larger than it is. 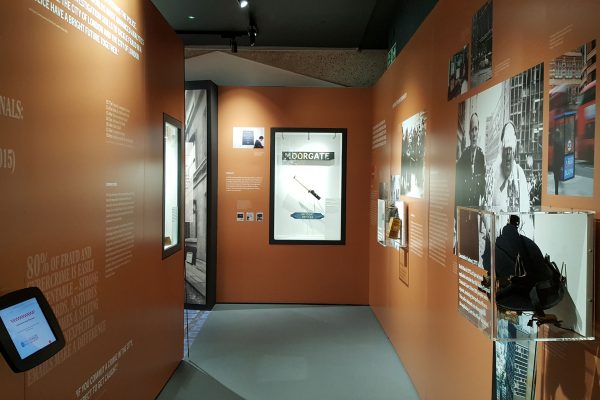 It’s a mix of history on display boards, and artifacts in glass cases.

From the earliest wooden truncheons and whistles, right up to modern day uniforms, it offers a brisk trot through some of the key events in the police force’s history.

A lot of space is given over to two of the more significant events, the one Jack the Ripper murder that took place within the City boundaries, and the Houndsditch robbery which resulted in the Siege of Sidney Street. 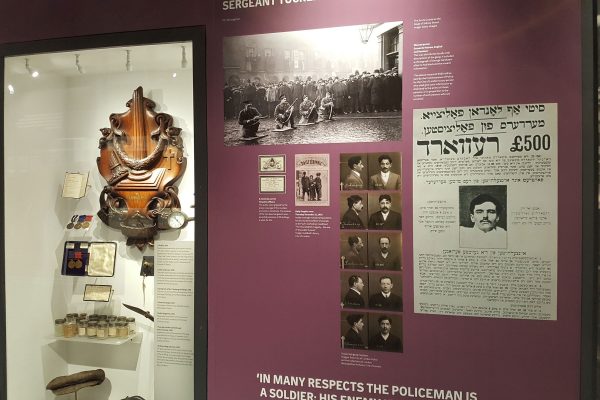 While policing is supposed to be apolitical, it reflects the politics and social opinions of the time. Many a person arrested for protesting can look back later at what is now seen as being an injustice.

The museum doesn’t shy away from historical issues, such as showing off two bombs made by Suffragettes, who were not above a bit of “terrorism” to get the vote for women. And a tally of crimes in 1946 includes indecency with males. 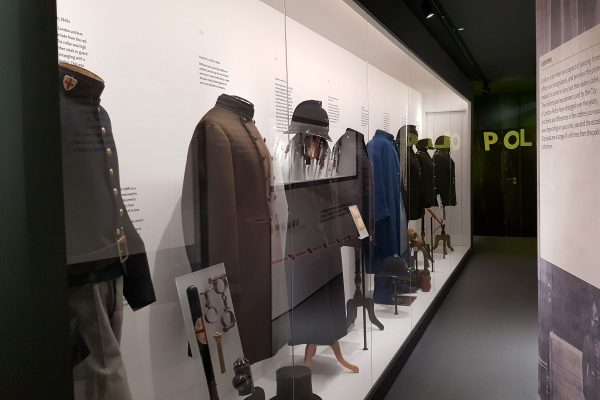 A mini-tardis shows off how communication has changed over the years, from rattles and whistles to modern telecoms, including some amusing photos of policemen carrying early radio sets that look less than comfortable to use.

Equally lighthearted, it seems that the City of London Police are the reigning Olympic champions for the tug-of-war — having won gold in 1920, just before the sport was removed from the Olympics. One of their medals is in pride of place.

Being a police officer wasn’t entirely without its perks, such as free medical care long before the NHS existed, and dedicated housing so the police could live near where they worked.

The City of London also had its own ambulance service, and probably for convenience than anything else, it was operated by the police rather than the local council. 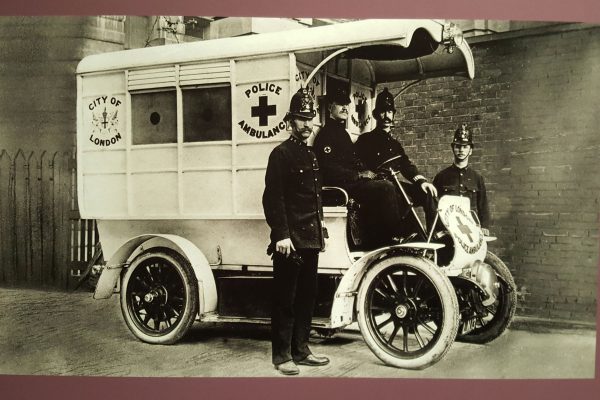 The ambulances were for everyone, but the museum also shows off some of the weapons that the police have faced over the years.

A long gallery of weapons, but one was curiously vibrating as I walked past. Shaking in memory of dark deeds, or a loose screw in the cabinet — I leave to your imagination. 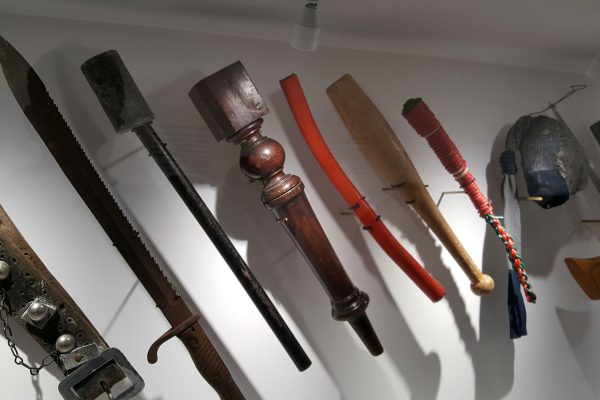 A final difference the City of London police have from the rest of the UK is their caps — which are adorned with the City Crest as opposed to the Brunswick Star seen elsewhere.

It was also a surprise to learn that the old top hats originally worn were reinforced so that policemen could use them to stand on and see over a crowd, and that sadly, the collars of their uniforms used to be reinforced to prevent garroting.

The museum finishes with some police caps to try on for size.

As a museum, this is pretty good, and worth a visit. It’s open Mon-Sat — with a late opening on Wednesdays til 7:30pm. The museum can be found just around the side of the Guildhall in the City of London. 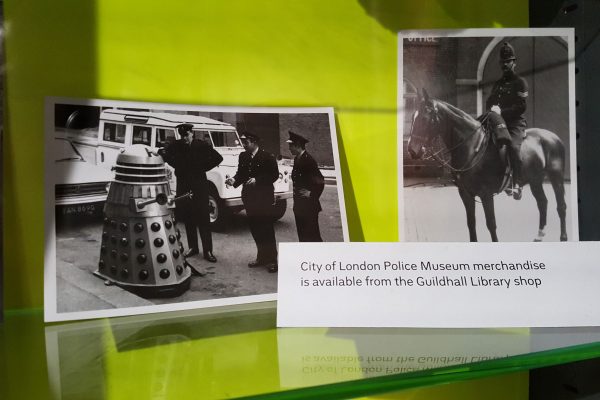