A bit of a rant about a topic that does somewhat irritate me.

One of the joys of living in a city with a view is how the skyline transforms from the daytime blocks of solid buildings to a nighttime that is still visible with buildings lit up and creates an entirely new skyline to enjoy.

Much nicer than looking out of the window at a sea of blackness in the countryside – and as I sometimes get when it is pouring down with rain at night and the skyline is obscured.

However, I also get annoyed by “pointless lights” – most of the lighting I see is offices still in use, or houses with people relaxing at night. But when I see a building lit up for no reason whatsoever, simply because someone can’t be bothered to turn off the lights, it irritates me.

It’s not just the waste of electricity, and the cost of that waste – but pointless light pollution also detracts from the night sky. In cloudy England, it is hard enough to see the stars as it is, but that is not helped by the amount of light flooding the sky at night.

I have on several occasions travelled through the City of London at very early hours in the morning when almost no one is around. Many construction sites are lit up – which is fine as that is probably a safety issue – as The Shard is lit up uniformly today, but will be fragmented when occupied.

Some buildings look lovely when lit up at night – St Paul’s Cathedral for example.

Also, retailers are wise to have a few lights left on, typically at the rear of the store as a security issue. In fact, when I worked in retail, I would be clever with my “back of store” lighting and use it to highlight the special offer signs!

But did the Tesco I passed yesterday morning need to be lit up as if it was open for customers? I don’t think so. The same for the many shop signs I saw floodlit to advertise their brandname. Who is going to be enticed by their advertising at 3am during the average week, or 7am on xmas morning?

However, it was Tower 42 that really caught my attention yesterday. Was the building really that full of people working at 7:30am on Christmas morning? 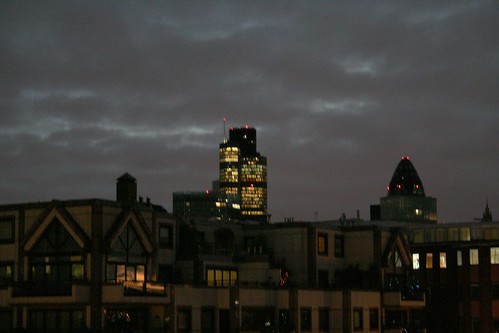 I have an instinctive dislike of excessive regulation, but I would like to see planning rules used to encourage any new external light fitting to be designed to minimise light pollution. That isn’t just a case of making sure the lights have “tops” so they don’t shine upwards – but also ensuring the downward light has minimal reflection off the pavement.

Simple sensible design can make a huge difference to the amount of light is wasted pointlessly floodlighting the sky, or creating overly bright patches under lamps simply because they have to be that bright to reach the next lampost. More lamposts with much lower wattages can be used – and the lower electricity costs pay for themselves within a decade.

Cutting down on excessive light where it doesn’t serve a purpose would actually enhance the city at night as decorative lighting stands out more against a now darker background.

Of course, no matter what is done to minimise light wastage in public areas – it doesn’t help if commercial buildings keep leaving all their lights switched on when no one is around.