Next month’s huge Routemaster bus pageant is getting bigger — as they have announced that a total of 112 buses have booked to attend, making it certainly the largest such gathering London has seen in many years.

Taking place in Finsbury Park on the 12th and 13th July 2014, the event will celebrate 60 years since the Routemaster was first exhibited at the 1954 Commercial Motor Show.

The organisers have also confirmed that they will have examples from each decade from the 1920’s including at least one example of TfL’s “New Routemaster”.

Entry is free — and there will be free rides on many of the buses that will operate a circular route from outside the park.

Extreme bus geeks may be interested to note that there will be special bus blinds used on the day by those vehicles offering rides on Route X60. 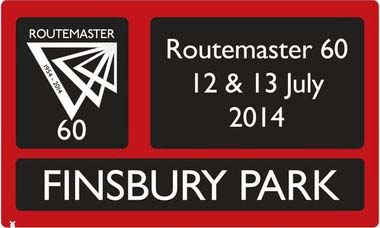 The event is being organised by The Routemaster Operators and Owners Association (RMOOA).

Other significant events during the Year of the Bus include the remaining bus garage openings, including the exceptional Stockwell bus garage later this month, and the pageant along Regent Street.

Not part of the TfL events, but absolutely worth doing if you can, is the annual vintage bus trips to an abandoned village in the middle of the MoD’s Salisbury Plains firing range.