The oyster card holder has died. Over a decade of service and its time has come to an end. Two halves joined by flexible plastic that were slowly rent asunder by use beyond its design.

Although the card holder is one of the original designs, your correspondent was not an early adopter.

Concerns about privacy caused delays. Over the next few years, regular press releases from TfL about how popular the Oyster card was proved to be no lure for this reluctant converter.

It was a deliberate policy by TfL to cause a massive price difference to emerge between the cost of a paper ticket and the Oyster that eventually caused a conversion from one to the other.

Principles can last only so far when faced with such additional cost burden.

Thus the first oyster card holder was acquired. A replacement for the pocket wallet as well, it has long carried credit cards and various library membership cards. 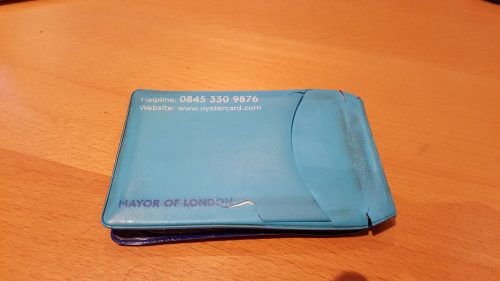 The outside pocket long a convenient location for the most used payment card has long since fractured away to being of little use other than offering a fraying shard of plastic to catch on unwary clothing.

The small corrugated fold becoming more used in recent years thanks to dire warnings not to mix up oyster and contactless. Where card holder was used unopened, now every journey required one side to touch the ticket barrier in isolation from the other half.

From barely used, the join in the two halves of the oyster card holder spent its last few years working more vigorously than it had ever been designed to cope with.

Finally, with a last gasp, it gave up. Torn asunder by overuse. One oyster card holder was now two.

A decade of a person’s life has been defined by that little blue wallet. Thousands of visits to shops where goods were paid for by revealing the oyster card holder, and within, the credit card it contained.

Every transaction, every purchase, shops, pubs, museums, all triggers by the presence of the blue wallet. But every wallet had its time, and time that has to come to an end. The final journey completed. The final purchase made. 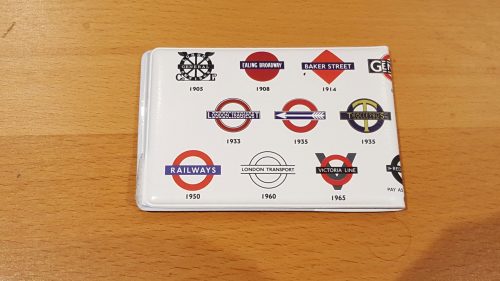