Lawrence was given the dagger, known as a jambiya, by Sherif Nasir in 1917 after the victory of the Arabs at Aqaba in modern day Jordan. It had been sold to an overseas buyer in 2015, but an export licence bar was made earlier this year, allowing rival bids to raise the money to keep the dagger in the UK.

The dagger has been secured by the National Army Museum with a £78,400 grant from the National Heritage Memorial Fund (NHMF). 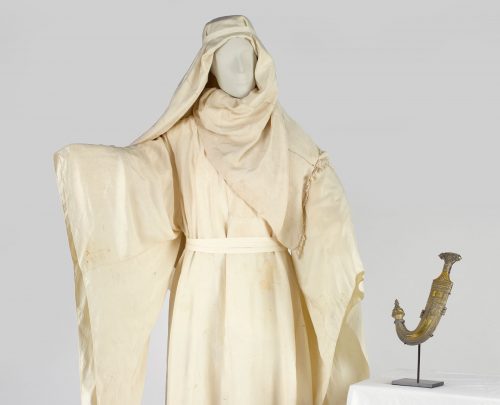 Lawrence of Arabia’s military exploits are well documented. His approach to working with the Arab tribes, of full integration and the abandonment of British dress, delivered great success.

Wearing a jambiya was customary for men at the time and would have helped Lawrence further ingratiate himself with his Arab allies. It helped complete his transition from the khaki-clad British soldier to Arab leader. The image of Lawrence wearing the robes and dagger was one that he and others cultivated to greatly further his reputation and seal his legend in popular culture.

Lawrence himself said that, “if you can wear Arab kit when with the tribes, you will acquire their trust and intimacy to a degree impossible in uniform.”

The robe was one of two given to the mother of Arthur Russell, who enrolled in the Tank Corps with Lawrence. Lawrence told her to cut them up and make dresses out of them but luckily Russell managed to save this one from her scissors. The kaffiyah was given to the artist Cosmo Clark by Lawrence after he sat for a portrait in 1922. Clark was one of the illustrators for Lawrence’s book, The Seven Pillars of Wisdom and Revolt in the Desert. Both items were acquired thanks to a further NHMF grant of £35,000.

The National Army Museum is currently closed for a refurbishment, so the latest acquisition has probably caused a bit of head scratching about how to redisplay one of their galleries.