Last chance to visit the Greenwich Observatory for Free

As I mentioned a couple of weeks ago, and more recently by other commentators, in a couple of weeks time, a large chunk of the Greenwich Observatory will be off-limits to those who do not posses the fiscal ability to pass through its portals.

I’ve been in a few times before, but wandered over yesterday for a last look before the financial barriers are raised.

There are several routes to the Observatory, which sits at the top of a steep hill, and while some coming in via Blackheath, or by car will have a flat path to traverse, the rest of us have a steep climb up a sloping path to get to the building.

Actually, I think the climb is better as you get an odd sense of achievement at the end of the assent and can “earn” your entry into the building. 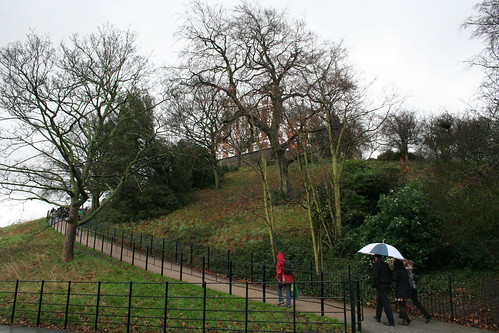 Going in through the new entrance instead of through the old gates and you can turn left to the planetarium and space exhibition – or turn right and prepare to pay to go any further.

Around the garden, and stop to admire the rump remains of an early telescope – past the stall selling books and audio guides and you are in the courtyard – yes, the very place where time starts, or some nonsense like that. 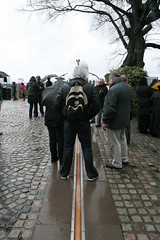 Get your photo taken straddling a line in the ground that is only there because the Americans didn’t really like the French at the time the decision was taken (no change there then). I wonder how many people who claim to be bored of politics will get excited at the chance to stand on an arbitrary mark on the ground that only exists there because of a political decision?

A little noticed brick building in the corner with its door hidden to one side is the small Camera Obscura, which only works on sunny days and not when Cumulus Obscura gets in the way of the Sun. On the outside wall is also the original tomb stone of Sir Edmund Halley’s grave. The grave itself is not far away in Lee and a replica marks the spot there.

Photos over it is now time to put away your camera as the rest of the place is strictly – and boy are they strict about it – a no photography zone.

Inside Flamstead House, the early home to the Astronomer Royal is given over in part to a restoration of the living quarters – all very National Trust and roped off to stop anyone touching anything – and signs dotted all over the place to remind you… No Photography.

Upstairs to the posh Octagon Room, built to impress posh visitors, and despite the dire warnings about photography, I sneaked out my camera to take a photo of a couple of ducks outside admiring the view on the roof.

Head downstairs, and here at last you can start to justify the £10 charge, as there is a really quite substantial museum dedicated to the history of Longitude and the Harrison clocks in particular.

This is generally laid out how I like museums – lots of artefacts, a few display screens, and lots of text.

Sadly, despite visiting on a Saturday, it seemed that a couple of school groups had also turned up and were running around the place with their project notepads and pushing adults out of the way when we dared show more than a casual interest in something.

Although I get annoyed by the bans on photography in places, it is often because people linger to take photos, and if you have a horde of school kids going around as well, it can significantly slow a tour down and reduce the capacity of the museum.

Out of the museum and over to the building marked simply as exit and shop, but actually contains a large collection of telescopes and early measuring devices.

The shop itself, is typical tourist tat, and not at all worthy of such an institution. A whole wall is given over to 2012 t-shirts and caps, and only a tiny section sells books of any scientific or historical interest.

And then you are out.

Oddly, you now have to go back in again – unless I missed something – in order to visit the other half of the museum, the Planetarium, which has always charged for shows, and the space museum. The route to the museum takes you past the quite impressive roof of the planetarium, made from bronze. However, the lack of signage as to what is where in this part of the venue could mean the casual visitor forgets to go down this part of the enclosure. 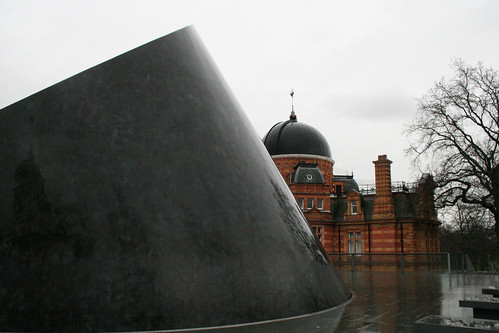 The space museum is sadly an example of what I like least about museums, being made largely of display screens, and all the videos have sound, subtitles and sign language. All very worthy, but do we really need sign language and subtitles at the same time? Hardly any real artefacts to look at.

Oddly though, the second tourist shop here is vastly better than the first, and has actual science in it. Gosh!

The obligatory cafe, with a very good view of the park from the outdoor area – on days when it isn’t raining.

As you leave though, take time to admire something that most people will see and yet probably not really notice – and that is a “secret garden”. Not so secret in that it is hidden, as actually it is plain sight from within the Observatory, but the entrance is quite difficult to find unless you know how – so even during summer when the rest of the park is packed, you’ll often find the garden with hardly anyone in it.

As you leave, notice by the slope you came up by a small gate in the fence. Yes, you can go down here, and in fact, a little noticed extra bit of the Meridian Line is here. Actually, the line passes the slope you climbed up earlier, but it isn’t marked on the ground there – probably to avoid traffic jams. 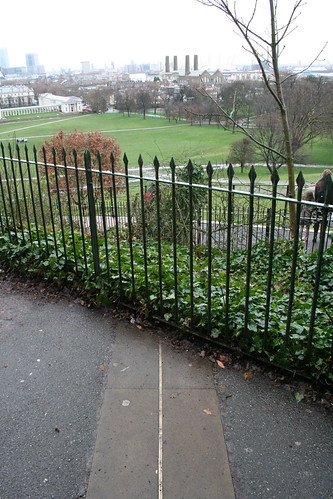 Along the quiet pathway and down some steps, and you’ll find the entrance to this quiet garden – which recently had a lot of landscaping done to it. 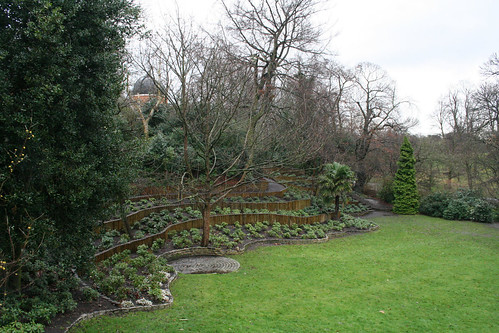 You can carry on down the path and it’ll take you to the main road through Greenwich Park, but makes for an interesting diversion if you are there – and a delightful “secret” to show off to friends if visiting.

The Observatory is free to enter until 8th March 2011 – after that, cough up a fee.

If seeing lots of clocks interests you, and you want to avoid paying, then try out the Clock Museum in the City of London, a gem of a tiny museum that is often overlooked by people. 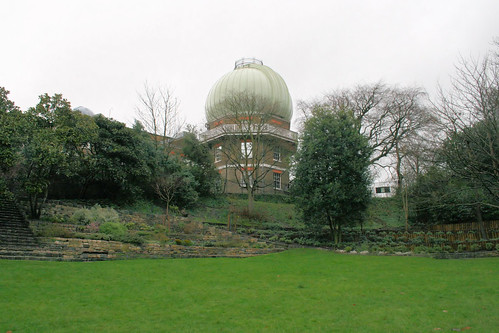