The Natural History Museum is to display the largest blue topaz gemstone of its kind from later this month.

On permanent loan, the flawless blue topaz gemstone weighs around two kilogrammes, and in its final cut form is 15 centimetres long and 10.5 centimetres wide.

It will be displayed alongside specimens from one of the world’s most important mineral collections. 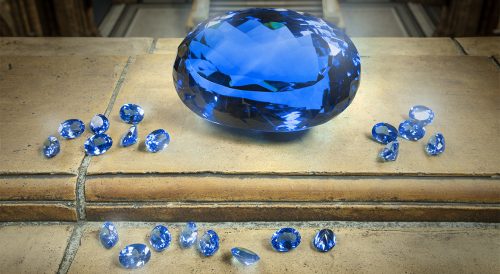 The Ostro stone — as it is called — was discovered three decades ago by British explorer Max Ostro in Minas Gerais, Brazil.

Topaz in its purest form is a clear stone. Variation in structure alongside chemical impurities can give it a different colour. Pale blue, yellow-brown and pink forms are known to occur naturally. Deposits of topaz are found all over the world, but the colour is often pale. The uncut material is often artificially enhanced using heat or radiation to make the colours more brilliant before it is cut into a gemstone.

The intensely coloured Ostro stone will go on public display at the Natural History Museum in the minerals gallery from 19th October 2016.