It doesn’t look like much, but the train station at Kew Gardens has a remarkable survivor of early reinforced concrete — and most people have no idea that the shabby looking footbridge is it.

In fact, not many people use the footbridge, as they are directed to use the subway instead, but the footbridge is more interesting.

Although restored in 2004, the white concrete footbridge looks much older with green mosses growing up and plenty of cracks in the steps leading to the overpass. 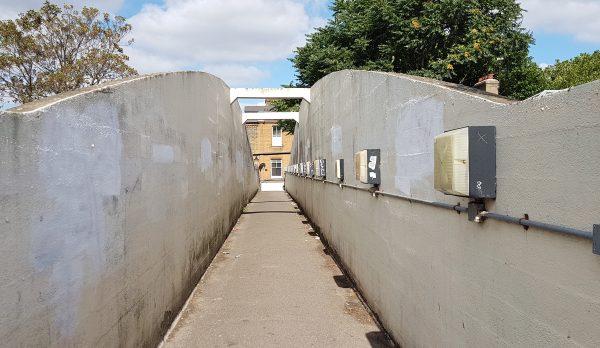 It’s the section that runs over the railway tracks that should give a hint to its unusual heritage though, for the deep chasm caused by the high curving walls was a deliberate design decision.

The high sides and projections over the railway are a legacy of the steam age, and were to protect delicate Edwardian clothing from the soot and grime of the railway below.

The footbridge was added in 1912, just over 40 years after the train station opened. Before that, people got from one side to the other using a level crossing, but that was both dangerous for pedestrians and slowed trains.

So, in 1912, a reinforced concrete foorbridge was built using a pioneering technique devised by the French engineer François Hennebique. The Hennebique system was one of the first appearances of the modern reinforced-concrete method of construction.

As a material, concrete is very strong in compression, such as holding things up, but very weak in tension, and bridge spans sag in the middle thanks to the forces of tension.

By developing a concrete slab with steel bars in its bottom face, Hennebique made it possible to build bridges out of concrete. 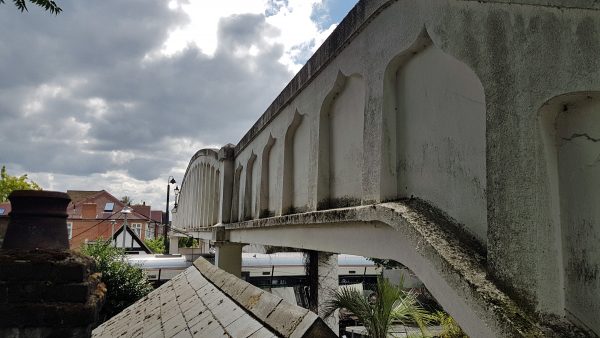 Many were built, but few survive.

The footbridge is quite narrow and quite high up, so the subway was added later and is far more heavily used now. But if you are in the area, pay a visit to the footbridge instead and step on a rare survivor of early English concrete.