As people wander around the ornate lawns of Kew Gardens, few are aware that just under their feet is the remains of a large private railway tunnel.

The rational for the underground railway is both functional and architectural.

If you build a very large heated greenhouse, then it needs heat — and in those days that meant coal fired boilers, and a very tall chimney to take away the fumes. A tall chimney next to the glasshouses was felt to be unsightly, so they put a tall campanile-style tower next to the main entrance, and dug a tunnel under the gardens to link the two.

That mighty tower was known as the Shaft of the Great Palm-Stove, because Victorian’s loved grand names for things. The tower is still there, a local area landmark that helpfully indicates to Kew Garden visitors that “the entrance is here”, and less obviously, so is the tunnel. 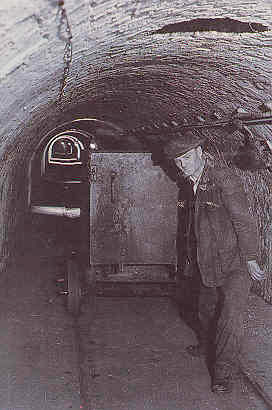 To explain what was going on, underneath the Palm House is a network of pipes carrying heated water to keep the space inside warm. These were, originally fed by two coal fired boilers in a basement next to the hothouse.

No one seemed to worry about a boiler exploding and destroying the plants.

The Kew Gardens staff kept a quantity of coke in the cellar next to the Palm House, but to bring in more supplies, they dug a railway tunnel under the grounds out to the road, where another larger coal bunker was based. To get the coke to the boilers, a light railway was installed, and staff hauled the carriages along the railway manually.

Fumes from the boilers next to the Palm House were then drawn back down the tunnel and up the chimney next to the main entrance.

Sadly for the Victorians, the distance from the boilers to the chimney was too great and that affected the ability of the boilers to efficiently generate enough heat. After a couple of bad winters when plants died because the Hot House was more of a Tepid House, they added two small flue chimneys in the wings of the Palm House.

That markedly improved things, not least for the staff working there as the new design also meant that less coal was needed.

Over the years, more upgrades were made, but in 1950 a major change occurred. Electrification!

Until now, the railway had remained a manual affair, with the carriages pulled along on foot, reputedly by staff on some sort of punishment schedule — but in 1950 they electrified the railway at last.

However it wasn’t to last, as just a decade later coal was replaced with oil.

New boilers were installed next to the redundant campanile chimney and it was brought back into use. The hot water was now piped down the railway tunnel to the Palm House.

That Victorian railway tunnel is still there, and still providing the means to heat the Palm House, although now the railway has been lifted and pipes line the walls. Visit Kew Gardens after it has snowed, and you might spy a long line of grass in front of the Palm House that mysteriously doesn’t have any snow on it.

Kew Gardens: Or, A Popular Guide to the Royal Botanic Gardens of Kew – William Jackson Hooker