Within Kew Gardens is one very famous outpost of China, and a couple of smaller, but more intimate outposts from Japan.

Although visible from quite a few places around the enclosed gardens, it wasn’t the famous pagoda that I visited first, but en-route from the Treetop walkway is a small Japanese style garden sitting amongst the English trees.

The Japanese garden is built more to mark the location of the Chokushi-Mon – or Imperial Envoy’s Gateway. The structure here was built in 1910 for the Japan-British Exhibition and moved to Kew a year later and is a four-fifths scale replica of the karamon (gateway) of the Nishi Hongan-ji temple in Kyoto. 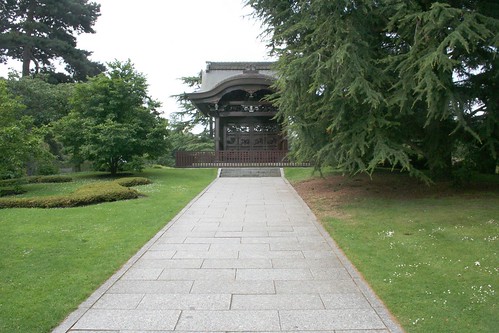 Like any Japanese garden, you have to have some stony Zen. I quite like Zen gardens, but only if softened by planting as well, as happened here. 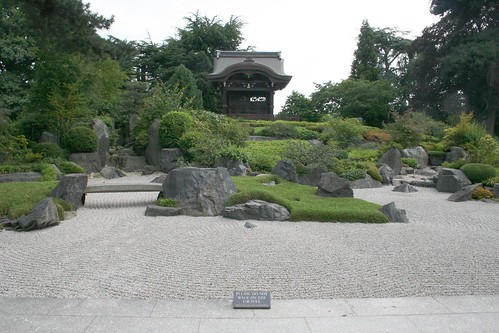 However, it’s time to trot over to the pagoda and get a view from the top. Or not as it happens. Called the “Great Pagoda“, which makes me wonder if there is a Lesser Pagoda somewhere, this was erected in 1762 and stands 50 metres high.

A rumour that the tower was surmounted by gold dragons, that were ripped off and sold by George IV to settle his debts is sadly false. They were just painted wood and rotted away. What is true though is that during WW2, holes were cut in each floor to allow for drop-testing of model bombs.

Sadly though, my intention to ascend to the top was blocked by locked doors, and checking it turned out that the tower is closed to the public. A broken video screen might have offered views from the top if only it were less broken. 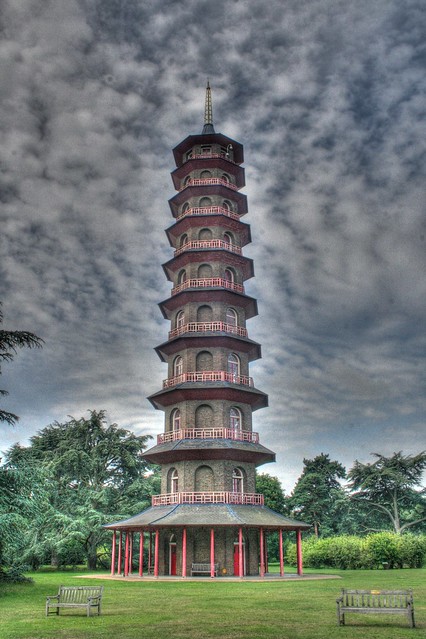 A bit later in the day, and across the other side of the Gardens I came across the Bamboo Garden and a recently installed Japanese Minka House.

This building was originally erected in around 1900 in a suburb of Okazaki, but acquired by Kew in 2001. Japanese craftsmen reassembled the framework and British builders who had worked on the Globe Theatre added the mud wall panels.

There are a few displays inside, and some signs explaining how a Japanese farming family would have lived in this home.

In an odd way, this building evoked youthful memories of Fiji for me, as while they are totally different in materials, there is an aesthetic similarity between the houses of Japan and Fiji. 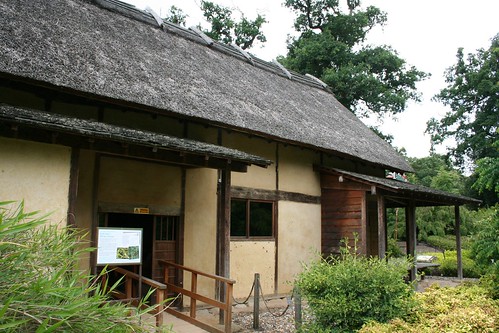 A bit further around the gardens was a small – very small – bit of outdoor Australia. Basically a strange plot of coloured soils and a few hardy plants dropped incongruously next to a main path. 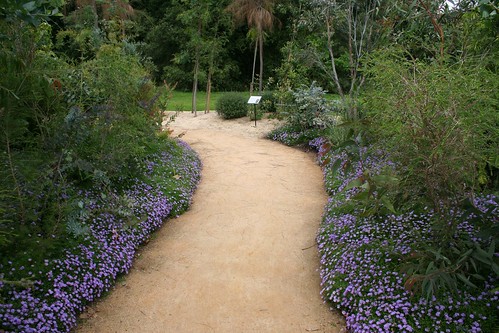